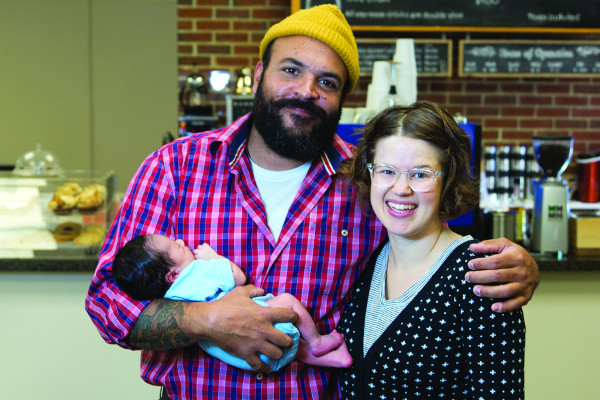 Tracy and Chris Rosenquest are at it again. This time the excitement is brewing on Oak Street in downtown Plattsburgh—at the public library, to be specific. The couple accepted an invitation from the Plattsburgh Public Library Board of Trustees and they are now the proud owners of Chapter One Coffee & Tea on the first floor of the library.

Tracy and Chris aren’t new to the service business. The pair took over operation of Conroy’s Organics between March 2015 and December 2016. During that time, they came to realize that the only way to keep the business consistently solvent was to operate it seasonally, which didn’t work out for a variety of reasons. The decision to close the business was not one they made lightly; they gained all the wisdom they could from the operation and empowered themselves with the knowledge of when it was time to walk away. “It was a sad decision, and the hardest part was telling our regulars, who we looked forward to seeing every day,” said Tracy. “But once we knew it was time, we found a lot of energy that we could put towards something new.” Ultimately, their customers understood, and the Rosenquests were able to take lessons learned with them into their next venture— start small, grow big, and be of service to those people who rely on a quality product.

Not Your Parents’ Library

I’m not sure anyone in high school is learning the Dewey Decimal System anymore. In the age of electronic readers, e-books, and Google, community public libraries have had to reinvent themselves and repurpose their spaces. The Plattsburgh Public Library has embraced this challenge and you can see the difference.

You notice it first with the Dream Garden Mural outside. Inspired by Kate Messner’s book, Up in the Garden, Down in the Dirt, the mural was designed by Sue Burdick-Young and brought to life with the help of many volunteers.*

Much of the work for the mural was done in something the library calls its creative “maker space,” which continues to evolve as different artists use it and the library determines what resources, such as electricity, surfaces, and light, are required.

Having the coffee bar on site really enables the library to position itself as a “third space” within the community—a place between work and home where community members can accomplish anything from a meeting to reading a book, or simply having a coffee and putting their feet up.

In true “Chris & Tracy” form, the Rosenquests hit the ground running. They took their first quarter to set up what their coffee bar would look like—getting as many details nailed down as possible so that they could begin to put intention into action. Chapter One has been percolating away since May of 2017 and celebrated its Grand Opening in June. It offers the traditional range of espresso and coffee drinks, chai and loose tea drinks, and iced beverages. It even has an assortment of “slow bar” coffee options, which are unique and new to the area. (“Slow bar” coffee features beverages that are brewed fresh in front of the customer by the barista using a kettle, scale, and a brewing device. It gives the customer a chance to ask the barista about the coffee and the brewing process.)

The synchronicity of the partnership at Chapter One isn’t limited just to Tracy and Chris. They see themselves with a variety of partners in this venture. Starting from the inside out, their partnership extends to local vendors, the city, and the community.

The Rosenquests prioritize quality over quantity. “We focus on providing a quality local product, using local ingredients. We know that by using as many local products as possible, we can help other local businesses grow and thrive,” said Chris. “Whether it be our coffee or our maple products, the locally sourced ones are just better.” Chapter One Coffee & Tea has partnered with a local coffee roaster to create a custom espresso blend, a Chapter One exclusive.

Another exclusive is fresh-baked pastries. They are the only location in the City of Plattsburgh to offer customers pastries that are delivered fresh daily from Rulf’s Orchard.

Chris remarked on the serendipity of their latest venture. “The alignment is probably what struck me most,” he said. “Everything seemed to fall into place.” They both expressed gratitude for how supportive the community has been. “The overwhelmingly positive response has been hugely affirming,” they said. “It’s been great—really, really great.”

Both Chris and Tracy have larger-than-life entrepreneurial spirits and, as Chris put it, “We will always have projects going on. We’re entrepreneurs at heart and it will likely always be that way.” But the strength of their partnership seems to lie in their similar approaches to entirely different specialties. Chris might be considered the dreamer/innovator. Coffee has always been a bit of a passion for him, so a coffee bar was a natural extension for an entrepreneur who loves coffee. Tracy has the same entrepreneurial spirit, but her real strength lies in application of the dreams. Her ability to take their dreams and make them into a day-to-day reality is where the couple finds a good balance. They both seem to thrive on a low-key approach, which balances the togetherness of living and working together. They are pretty good at setting boundaries as far as work and play, and they both have individual interests apart from the work they do together.

Chapter One Coffee & Tea is currently open every day but Sunday and employs two parttime baristas. As for what the future holds, they are exploring offering catering services for meetings, conferences, and events. Perhaps there’s a coffee cart in their future. “All of these ideas are kicking around,” they said.

The Rosenquests’ energy for business and community hasn’t dimmed a bit since their ownership of Conroy’s, which is incredible, not just because of how long they’ve been working, but even more so because of how drastically their life has changed. Not only has the couple launched a whole new business venture, but their family has grown as well. Tracy and Chris Rosenquest welcomed Miles Charles Hudson, their first child, two weeks before our Strictly Business interview. Miles was curled like a little bean in Chris’s arms while I talked about the future with his parents. “At this time in my life, with the amount of sleep I’m losing, I’m certainly in the right business,” quipped Chris.

I’m pretty sure no one appreciates a good cup of coffee more than the parents of a newborn. Strictly Business looks forward to seeing what Chapter Two has in store for the growing Rosenquest family and their new business.