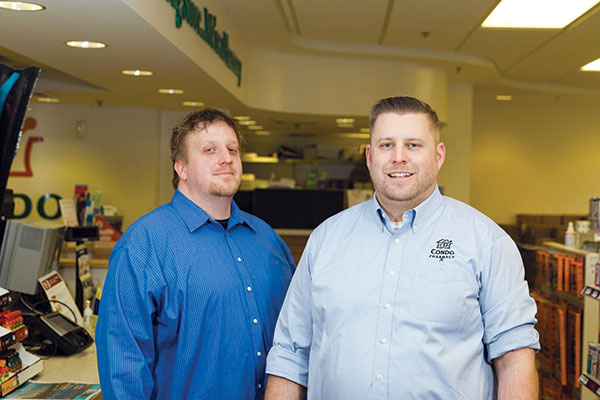 Condo Pharmacy is the only family owned, family operated pharmacy in Plattsburgh, yet the family name is Moore. In the words of the great Bard himself, “What’s in a name?” Established by Joe Condo in the 1940s, Condo Pharmacy is the oldest operational pharmacy in Plattsburgh, as well as the only independent one. Continuing that legacy is more important to the Moore family than the name above the door.

“At Condo Pharmacy, we recognize that pharmacy is a learned profession requiring individuals to dedicate themselves voluntarily to acquiring and maintaining exceptional knowledge and skills in order to provide pharmaceutical care in an ethical context.”

Jean Kovaric of Schenectady met Plattsburgh native Gary Moore when they were classmates at the Albany College of Pharmacy. The chemistry between the two was undeniable, and in addition to attaining their respective registered pharmacist (RPh) licenses, they became husband and wife. In the early 1970s, they moved to Plattsburgh, where Jean Kovaric Moore started working for Jim Weeks, who had taken over Condo Pharmacy when original owner Joe Condo retired.

Fast forward to 1993. Gary Moore was working as the director of pharmacy at the Champlain Valley Physicians Hospital, while Jean was double tasking as a hospital staff pharmacist and working part time at Condo. When owner Jim Weeks passed away, the Moores didn’t want Condo to become a chain. Acting on a long-time dream of opening their own business, they purchased the pharmacy, laying the cornerstone for a family business that their sons, Steve and Dave Moore, would join.

Ten years into their ownership, the Moores renovated the pharmacy, which enabled them to maintain and develop the compounding portion of the pharmaceutical business, while keeping pace with production and privacy concerns regulated by the Health Insurance Portability and Accountability Act (HIPAA).

Steve Moore remembers helping his parents move into the new shop during his last spring break from pharmacy school. The Moore family came together and moved the entire store overnight—it was a short jaunt across the parking lot. While other students might have had more recreational plans for their spring break, Steve and his brother Dave wouldn’t have had it any other way. They had always wanted to be part of the family business.

Steve Moore earned his doctor of pharmacy degree (PharmD) from Ernest Mario School of Pharmacy at Rutgers University in New Jersey in 2004, and later that same year, he enrolled in business school. He recalled joking with his Dad, saying, “‘When I come to work in the store, I won’t make you call me ‘Dr. Moore—Dr. Steve will be just fine.’ He remarked that he was lucky his brother was standing between them at the time. Dave Moore earned his degree in biochemistry and his licensure as a certified pharmacy technician (CPhT).

Condo Pharmacy was in operation in its new location for less than a year when Gary Moore passed away suddenly. Both sons came home from school, and following their plan to work in the family business, rallied with their mother. The three have been making a go of it ever since, along with about 15 employees.

The younger Moores had a good idea of the patient care legacy their parents had established. These weren’t just customers picking up pills. They were patients and every interaction, every consultation, was of the utmost importance. Unlike any other retail establishment, the success of a pharmacy isn’t measured by sales necessarily, and for the Moore brothers, the legacy they carry on is just as important to the success of the community pharmacy. The challenges of managing a successful store front certainly are not limited. However, the challenges of managing a pharmacy are multiplied by state and federal regulations to which they must adhere, and a playing field that shifts without notice or regard for a business plan.

Rising to the Challenge
One such challenge to Condo Pharmacy was a mandate by the City of Plattsburgh’s pharmacy benefit manager for all maintenance prescriptions to be filled by a mail-order pharmacy. “That’s a huge chunk of business, so we had to figure out how to compensate for that loss in both the short and long term,” said Steve Moore. He made it his business to get to know his local state assembly representative and remembers the day recently retired state representative Janet Duprey called him from the floor in Albany to let him know that Governor Cuomo had passed the Anti Mandatory Mail Order (AMMO) bill into law for New York State. Moore is an active member in the Pharmacists Society of the State of New York (PSSNY) and a lifetime member of the National Community Pharmacists Association (NCPA).

Late last year, CVPH made the decision to take the management of its pharmacy in house. Previously it had been contracted out to Condo. Steve Moore understands the decision and has no regrets. He is now free to focus on their Montcalm Avenue shop and doesn’t have to divide time or energies between two locations, but he is grateful for having had the opportunity to work alongside other healthcare professionals. “Those professional relationships are invaluable to us,” he said. “Not only do they allow us to learn the considerations of the practicing prescribers, but also to be able to position ourselves (pharmacists) as consultants for patients’ care.”

The Moores don’t refer to the people who come in to Condo as customers; they are patients, and they carry that idea into the growth of the rest of the store. You won’t find trinkets or gifts at Condo. The Moores made the decision to focus on offering products exclusively related to health care. “You’ve driven past a few pharmacies to come to us. We want you to know that we not only value that; but we enjoy what we do. The items we offer are personalized and healthcare related,” he said. With more people paying for prescriptions out of pocket, a lot of them might be trying to do their best to stay healthy in the first place. To that end, Condo Pharmacy offers a variety of pharmaceutical-grade nutritional supplements and vitamins. They also make available a supply of durable medical equipment.

Carving Out a Future

Steve Moore supports the Collaborative Drug Therapy Management (CDTM) practice and would like to see it rolled out to more medical practices. Since New York passed the legislation authorizing CDTM in teaching hospitals in 2012, pharmacists have been successfully collaborating with physicians in managing drug therapies for patients with a broad range of disease states. As a community pharmacist, Moore is in a unique position to be an essential component of every patient’s healthcare team. The knowledge community pharmacists have of both medications and patients is an invaluable component to achieving and maintaining patient wellness. One of those components is compliance. While your provider might not know if you’ve taken the medication as directed, your pharmacist knows how many refills you’ve picked up. Condo Pharmacy also offers monthly blister packs for medications instead of bottles. They enable the patient or caregiver to easily see what medications have been or need to be taken every day.

Another special niche that makes Condo Pharmacy indispensable is compounding. Theirs is the only local pharmacy that offers the service. It was one of the reasons for the renovation in 2004, and it’s become a growing piece their business. Compounding gives the provider a whole other avenue when looking at tolerability, efficacy, and dosage. Having medication compounded insures the homogeneity of the mixture which is virtually impossible to achieve otherwise.

The entire process is technology based and enabled by computers and software that operate the “mortar and pestle,” the scale, and the inventory. Compounding allows for in-house creation of capsules, topical creams, lotions, or ointments, which can be made in whatever potency is required for maximum efficacy and minimal side effects for each and every patient. They are tremendously effective for hormone replacement therapies, pain management, and even something as neutral to the medication as adding a flavor agent for tolerability. In the words of Moore, “Compounding solves problems.” Dave Moore, Condo Pharmacy’s certified pharmacy technician, is happy to put his biochemistry background to work creating solutions to those particular patient problems.

As for what the future holds, the Moore brothers balance the intricacies of patient care with advocating on a state and national level for their trade, their pharmacy, their legacy. While Condo Pharmacy appears to be a small shop in an even smaller town—one experience will confirm it is much “Moore” than that.