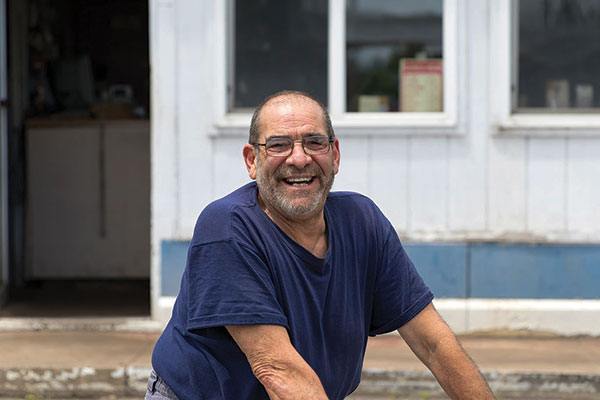 It’s a rare occasion when one gets to meet a person so genuine, passionate and connected to his profession. When the opportunity arises, the interaction is lasting, one that stays with you for days. That was certainly the case when I met both Gene Grafals of South Catherine Small Car Service and Jimmy Dubrey of Dubrey’s Service, Inc., both owners of their own automotive repair businesses right here in the heart of Plattsburgh.

“It’s about the customer,” explained Grafals. “It’s always about the customer, and it’s about understanding what they need and how I can provide that.” When you visit South Catherine Small Car Service, you might look at the pile of keys, car manuals, paperwork, and other miscellaneous automotive trinkets and gadgets and wonder how Grafals might find anything in his “office.” However, it’s clear he knows exactly where everything is and if anyone were to organize his piles he wouldn’t know where to find anything.

Grafals, a Brooklyn native, went to a vocational high school, Brooklyn Automotive, where he learned engine repair. “It was a whole different age,” he reminisced. “Back in those days people took vocational careers and stuck with them.” With what seemed like a bit of sadness in his voice, he continued, “Now kids are forced into a vocational school rather than choosing to go to one.”

Grafals’ father was a tinkerer. “He was always tinkering with cars and because I was a young person, that tinkering intrigued me. The engineering and application of an internal combustion engine was a learning process. It wasn’t something that was going to be mastered overnight. And that’s something that intrigued me and set me toward that career.”

As a kid, Grafals would hunt the streets and once in a while he would come across a lawnmower engine, drag it into his backyard and tear it apart. “If I could pull that rope and get it started the first time, that would be better than Christmas,” he said. That’s what’s kept him going then and today he has the same passion and enthusiasm.

After several years and several visits to Northern New York, Grafals decided to relocate to the Peru area where he built a small cabin on 50 acres and commuted to his work at Plattsburgh dealerships. For years he worked at his current location under different ownership until the day came when the building and business came up for sale. With a little ingenuity, owner financing and passion, he purchased the business and has been operating there ever since. “We’re more like a mom and pop store, and mom and pops are being drowned out by big companies, mass advertising and a lot of other things that are making it more difficult to operate in this economy,” he explained.

Grafals attributes his success and longevity to understanding his cus- tomers. “One of the first things I realized is that in this business you have to put yourself on the other side of the counter,” he explained. “When someone comes to you for service, you have to see what the customer’s needs are and what they can afford. After a period of time knowing someone they’re not a customer anymore, they’re a friend.”
After a series of customers came into the shop during my time with Grafals it was clear why he is successful. At South Catherine Small Car Repair customers work directly with the mechanic. There’s no mid- dle-person, There’s no contract mechanic who takes your car offsite. The customer walks in, speaks with Grafals, who fixes their car, and hands it back to them. The transaction is clean and contains no go- betweens. It’s a personal relationship.

Service to the Fullest
For 56 years Dubrey’s Service, Inc. has provided auto repair, towing and full service gasoline in the City of Plattsburgh. During his grade school and high school summers, Jimmy Dubrey worked pumping gas, cleaning parts and preparing to take over his father’s small business.

“That’s what we did. When you were a kid in the summer you went to work. Times were different then than they are today,” Dubrey said. Born, raised and educated right here in Plattsburgh, Dubrey knew he would eventually take over the family business and in 1998 he did just that. His father, now 87, is still actively involved, greeting customers and running out to pump gas when customers roll in.

With two full time employees, Dubrey relies on his team. It’s the personal touch that has kept the business going for so long. “This is a small town and if you do one thing wrong everybody knows it; if you do ten things right maybe one person knows it. It’s all about honesty and being fair,” he observed.

Surrounded by car dealerships Dubrey works closely with his neighbors often times borrowing or lending specialized tools or taking overflow customers the dealerships can’t serve. “We work with our competitors and that also makes the difference for our customers,” he explained.

As far as the future of the industry Dubrey sees himself as part of a dying breed. “It’s very hard to get anybody to go into this field. It’s technical. A lot of cars have five or six computers that talk to each other. Other repair shops see the same issue. There’s a real lack of talent com- ing into this field.” His advice, “There’s money to be made doing this work. If they can get a good education either through a trade or vocational school, they can get a job anywhere.”

Dubrey doesn’t know how the business will continue after he is ready to retire. “Hopefully one of the employees will want to step up. I’d hate to see some big chain take over.” There’s a niche for this type of business. But until that time comes Dubrey’s will continue to provide more than just gas and service.