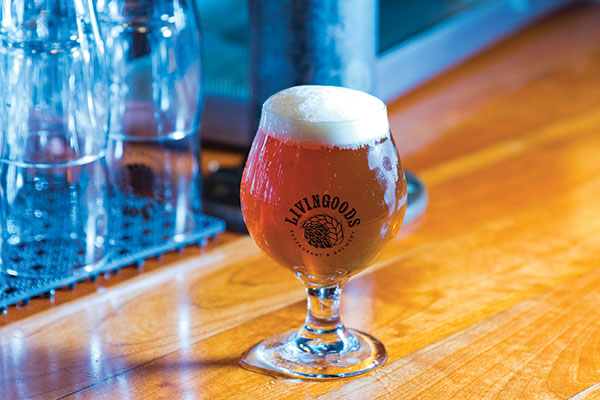 Many have pondered the age old question of whether a dream delayed is a dream denied. In Matt Ray’s case, his lifelong dream, had been to create a brewery that he could call his very own. Entering his eleventh year as owner, restaurateur and now brewer at Livingoods Restaurant and Brewery in Peru, New York the answer to the question is a resounding “No!”

Ray and his wife, Jess, have followed their own entrepreneur’s guidebook to success, embracing even the toughest pages, especially the ones that outline hard work, patience and timing, to make a distant dream become a reality.

Inspiration
The couple met while in college at SUNY Potsdam in the 1990s. It was during those years that Matt discovered craft beer and home brewing. They moved to Colorado at a time when the craft beer and farm to table movements were ramping up. “Microbreweries were opening up at a crazy rate,” explained Jess. “It was an ‘us against them’ mentality, the ‘them’ being the big, domestic breweries.” As of 2012, Colorado ranked third in the number of craft breweries in the U.S., with a total of 161 brewers and brewpubs. Like a kid in the proverbial candy store, Matt was able to hone his brewing skills in the region for three plus years.

But the Rays were drawn back to the Adirondacks and the North Country. They missed their families and it was time to go home, so Matt looked east to see what was happening in the brewing world. “The market was wide open,” he said. The couple returned, and Matt worked as a brewer in Lake Placid while he and Jess wrote several business plans based on opening a location in Essex or Clinton counties. When discussing what shape their business might take, they settled on a brewpub vs a brewery business model, realizing it would be essential and the perfect complement to serve great food along with the beer they would make. No stranger to the world of entrepreneurship, Jessica, a photographer, grew up in a “self-employed household”. “I have always learned by working,” she said. She refers to herself, and Matt, as “pathologically unemployable”, the curse, or blessing, of the entrepreneur.

Building a Foundation
The couple opened Livingoods Restaurant at its first location on Margaret Street in downtown Plattsburgh in October of 2005. In November, they found out that Jessica was pregnant. The space would prove to be a challenge from a brewing perspective, as would raising a family while owning a business. The next eight years were well spent but challenging — building their brand, their reputation and a family. “It takes time to build a business,” Matt explained. “To be an entrepreneur is to lose sleep. It is its own entity and has its own needs. If you thought about those things (challenges) you would never do it.”

At times the dream to create his own brewery seemed distant, but it did not fade. Matt had been eying the Cricket’s restaurant property in Peru when it went on the market in January of 2012. They needed the right location, the right size building and infrastructure to make a move and everything about it seemed tailor made for his brewery dream. At the same time the couple connected with future business partner, Jon Rulfs. “He was the linchpin that helped facilitate the brewery. He wanted to see things happen with the property,” said Matt. With the help of their new mentor, the couple was able to access the financing to make the major brewery equipment investment.

Brewing
While Matt’s passion for brewing had remained steady, a lot of things had changed in the brewing world over the previous decade. “It took a while to get a system down. There were changes going on with the ingredients,” he explained. “I have my own recipes and I love having the freedom to explore all styles of beer.”

When Matt hears someone say, “I don’t like beer” he immediately thinks, “Maybe you just haven’t met the right beer yet.” Most people are used to drinking only commercially produced beer. Matt believes beer should be consumed as close to where it is made as possible, not imported or shipped across the country. As a craft brewer, he is able to introduce people to beer in ways they have never enjoyed it before and therefore, haven’t been able to really appreciate it.

It has been almost two years now since they started brewing. Matt is increasingly able to focus on the beer component of the business, while Jess’s focus is on day-to-day operations and administrative tasks. Livingoods now distributes beer to around fifteen wholesale accounts in Plattsburgh, Lake Placid and further south. “I think it’s important to get the beer out there. Once people try it, it will bring them back,” said Matt. As he weans himself from his kitchen duties, it allows some of their employees who are passionate about food to realize their own dream. Matt’s goal is simple. Make the best beer and sell it. “I like to have freedom in the beers I make. Each beer doesn’t have to be the same every time; the goal is always trying to make one batch better than the last one.”

Adirondack Coast Brewers Coalition
Matt recently read an article that states when a brew pub opens in a community it is a sign of prosperity and positive growth. “I am excited about the brewing community that has popped up in the North Country almost overnight,” he remarked. “The com- petition is friendly; brewpubs are a proven source of success, so the more the merrier.” Like the growing Adirondack Coast Wine Trail, Matt and Jessica hope to organize the brewing community and create a destination. “There is a lovely string of breweries including Oval Craft Brewing, Ausable Brewing Company, Plattsburgh Brewing Company and Valcour Brewing Company,” said Jess. The hope is to create the Adirondack Coast Brewers Coalition for ‘beer geeks’ and lovers of all things local. “We hope to grow the region, the market and our own businesses,” added Matt. “A sense of community with like businesses is important, and I haven’t really felt that until recently.”

Matt and Jess interact with and support many other young entrepreneurs in the region. “We are all leading the way including local farmers, musicians and vendors. We are all cut from the same cloth and we are here to show everyone what it’s like to live your dream and bring people together.”

Although the past decade has been filled with what Matt refers to as ‘blood, sweat and tears’ the rewards have been great. “We have grown every year since we started, even the year we moved our location. We are where we want to be. We have created a gathering place, a place to have fun, where people of all ages can enjoy themselves. We love the four seasons, enjoying the land, finding some solitude and finding a balance. We couldn’t dream or imagine a better location.”