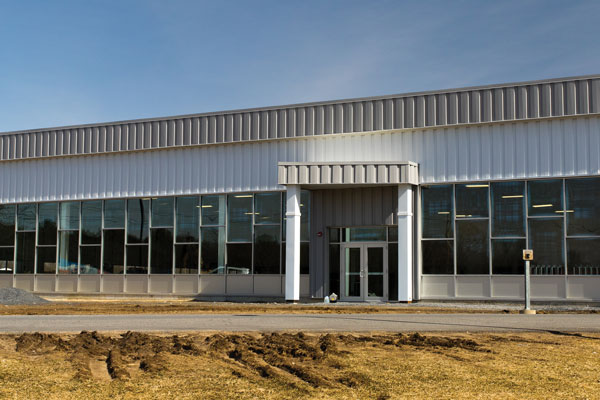 It’s no secret that Luck Bros. Inc. is busy. It is common to pass by a local construction site, whether it be a commercial, residen- tial, bridge, or highway project, and see the Luck Bros. logo on the side of a crane, truck or van. The locally-owned company is actually two businesses rolled into one, with Luck Brothers offering years of experience and construction expertise on local highways, bridges, utilities, and road paving endeavors, while Luck Builders’ projects are a Who’s Who highlighting the incredible growth in the regional retail, commercial and housing sectors.

Luck Builders has had a hand in projects as diverse as Lenny’s Shoe & Apparel, the SUNY Plattsburgh Hawkins Hall pond facelift and the eco-friendly, state of the art housing on Ampersand Drive in Plattsburgh. A lesser known fact is the extent to which both halves of the whole are able to complete increasingly complex construction projects in the region using almost exclusively local subcontractors, labor and suppliers.

History
In the 1950’s, Jim Luck and his brother, Albert, formed the Lake Champlain Development Corp. In the early days, their construc- tion crews were staffed primarily with trade union labor. In 1969, the brothers oversaw the creation of a new corporation, Luck Bros. Inc., a company that would move forward as a non-union workforce organization with Jim’s offspring as junior partners. “My father was a very independent man and took issue with union mandates he felt were unreasonable at that time,” explained Jeff Luck. Since then, Luck Bros. has done only prevailing wage work, meaning that its employees are paid what union workers at each corresponding skill level would be paid, without being subject to union dues or mandates. Luck Builders employs a workforce bearing no union affiliation as well and offers a non-prevailing wage.

While the original founding brothers have passed on, their legacy continues with Jim Luck’s offspring, who bought out or inherited the company and who are currently involved in the family business in varying capacities. Jeff graduated from Union College in 1976 with a degree in Engineering, and is the president of Luck Builders. Jeff’s older brother, Ted, a PE and a graduate of Clarkson University, is the president of Luck Bros. Sisters Cynthia Mayette and Jamie Hemingway act as Payroll Administrator and Project Manager of Luck Bros., respectively, and brother, Christopher, handles all insurance matters, Equal Employment Opportunity (EEO) compliance and is the contracts and subcontracts administrator. Ted’s son, Travis, representing the third generation to work in the family-owned business, is a full-time project manager.

The Competitive Edge
Luck Builders recent high profile project for Nova Bus—a customer inspection facility/showroom at its Banker Road location in the Town of Plattsburgh — is now ready for occupancy, with final site work to be completed this spring. The company had built the Prevost addition for Nova Bus in 2013 and so its reputation was known to Nova parent company, Volvo. “They knew they would get the same quality of work and conformance to their strict international standards,” explained Ron Nolland, estimator for Luck Builders and Project Manager for the Nova Bus Inspection Center.

Jeff Luck credits his firm’s ability to self-perform for its great reputation and continued success. “In order to stay competitive, it makes sense to do everything yourself. We do almost everything in-house. We train our work force in almost every aspect of the construction process,” he explained. While other local manufacturing companies complain about a lack of skilled labor, Luck Builders’ focus on in-house training not only creates a solution, but makes for a satisfied customer. Self-performing contractors can exert a great degree of control over a job, including quality, budget, and adherence to a schedule and project safety.

“Every square inch of the inspection center, our world-class bus showroom, is very well done. It is amazing to see the results as a whole, completed in such a short time,” said Jean Cote, head of Manufacturing Engineering at Nova Bus. “Luck Builders is known for being professional, for respecting their budget and delivering on time. Despite delays that were outside of their control, they got back on their feet quickly and still managed to deliver on time. The quality level is above our expectation, they produced five star results. We appreciate all of their efforts and are proud of our local suppliers and their teams.”

Local Subcontractors and Suppliers
When help is needed outside the Luck’s areas of expertise, a net- work of trusted subcontractors and suppliers is essential. “We don’t do heating and mechanical. Those aspects we will subcontract out to specialized subcontractors, with whom we have a good relationship,” explained Jeff. Additionally, electrical projects may require outside assistance.

It is there that Luck’s right hand men, the estimators and project managers, jump in to coordinate all the moving parts, supplies and people for a particular job. Dave Pellerin is currently the estimator and PM for several ongoing jobs, including the company’s Tall Pines project on Route 9 south of Plattsburgh, scheduled for completion in July, 2016. Steve Remillard is estimator and PM for projects, including work at Paul Smith’s College, and at Elizabethtown Hospital and CVPH. Ron Nolland has acted as Luck’s Project Manager for its completed Catherine Gardens project on North Catherine Street in Plattsburgh’s center city in addition to Nova Bus and many others. Other essential Luck employees are Corky Corrado, Don Beaton and Craig Amell.

“Luck Builders uses local suppliers and subcontractors whenever possible,” explained Nolland. “We solicit bids electronically and provide plans for download on our sharing site to make sure that everyone has the opportunity to bid on our projects. We are always looking for, and encouraging, new and emerging local suppliers to bid with us.” He added, “We have developed a large pool of local sup- pliers and subs that have been counted on time and again to provide excellent work, keep us competitive and help bring our projects in on time and on budget.”

“It is a tight knit community. As long as we know the subcontractor’s reputation and can trust him, we will continue to work with him,” said Jeff Luck. Many of the names Luck Builders has on speed dial are local family-owned businesses like their own. “Murnane Building Contractors in Plattsburgh is often a competitor of ours, but we have a unique relationship that goes back decades and we often do sub- contract work for them. We are both second generation companies and our fathers were good friends,” added Luck.
In the event a product specified by a customer is not available locally, you can be sure Luck Builders’ project managers have exhausted all possibilities. “If we cannot obtain an item from a local distributor or subcontractor, we still try to use a company as close to the area as we can. We strive to use New York State businesses,” said Nolland.

Employing the North Country
When Luck Builders won the bid for the College Suites at Plattsburgh project in 2008 to create off-campus housing for SUNY Plattsburgh students, it took on the largest local contract the company had won to date. Bearing a $13 million price tag, with construction spanning September 2008 to August 2009, the job employed upwards of 180 people in its entirety, with a primarily local subcontractor and labor pool. “At one point there were almost 100 people on site on Broad Street to meet an extremely accelerated schedule,” explained Luck. “The owner got a spectacular complex that opened on time.” That owner later reneged on the contract, but the success of the project in terms of coordinating a large scale local workforce was impressive.

While both sides of the company acknowledge the seasonal limitations inherent in building in an area like the North Country which impede construction schedules, Luck Bros.’ season is more strongly impacted. “New York State has mandates when it comes to highway building specifications. There are limitations on building during the winter because performance and quality will not be the same when the ground is frozen,” said Luck. Even with a 35 week season, they must be doing something right. “The majority of our local workers come back every year,” he added. Working late into the fall, Luck Bros. completed its biggest job, the rebuild of the I-87 and Rte. 11 Bridge in Champlain during 2014-15 — estimated at over $20 million — using its skilled and trusted local workforce.

Bright Future
Jeff Luck observed, “The regional economy has improved steadily over the past three years. We are able to fill our needs within three counties, with occasional work outside the region, more so on the highway side.” Capable of completing even the most innovative and complex construction projects with local suppliers and local skilled labor, both companies have everything they need right here in our own backyard.