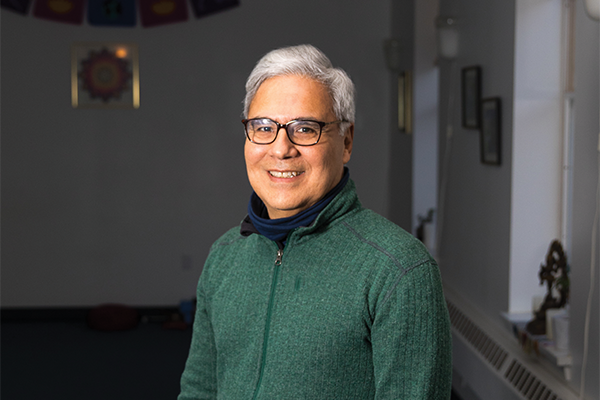 Sitting perfectly cross-legged, back straight, legs folded, Luis Sierra’s gentle smile is warm, welcoming, and inviting. If you’ve never had a chance to spend a few minutes with him, you’ll find that the opportunity is paired with a sense of calm and relaxation.

Sierra’s yoga classes are as welcoming as his personality. They’re noninvasive, unassuming, and accessible for people with all physical abilities. For Sierra, yoga isn’t just a class or a strenuous pose, it’s a lifestyle grounded in love, persistence, acceptance, and compassion.

A Plattsburgh transplant, Sierra started practicing yoga as a “stressed out” grad school student in his late 20s. In the university gym, the yoga class he was introduced to was run by a male dancer in New York City. As the only guy in the class, he felt good but a little odd.

Swimming, biking, and other individual sports always attracted Sierra, and yoga did the same. His experience after his first yoga class was a feeling of being more in his body and more relaxed afterward. Because of the benefits he was seeing, he wanted to go to more classes and he started trying out different ones (some, as he described, “with the chanting and other guru aspects of it.”). Eventually his experimentation led him to take yoga training to deepen and learn about his own practice. Teaching yoga was the furthest thing from his mind at that time. “I wanted to know what the poses meant. I wanted to understand more and to see what this meant to me,” he explained. His mentor and yoga instructor had something else in mind. Even when he was adamant that teaching wasn’t his path, his mentor was convinced that Sierra would eventually become a teacher. Then one day it happened— a beginning yoga teacher canceled and Sierra’s mentor encouraged him to lead the class.
Although nervous, he found his comfort zone in the front of the room and from there, he started to develop a passion for teaching yoga.

Over the years and through his many connections, he was invited to teach a yoga class to a group of patients participating in a cardiovascular rehabilitation program. At the time, labeling it “yoga” was a little too counter culture, so instead it was touted as a “stress management” class. In that sense it was yoga by another name and in the context of the program, it provided participants the ability to connect with their bodies, find opportunities for self-awareness, and create pathways for stress reduction. “Now when you turn on the television, everyone and their grandmother is doing yoga,” Sierra said. Its widespread popularity points to both the wide acceptance of yoga as well as the health benefits it has provided to the many people who practice it.

The Beginnings of Yoga
The origins of yoga are debated, but it has roots in ancient India, and chanting and Sanskrit, and poses form the foundation of the practice. Even today, a student can find a class or two that has some aspect of chanting or meditation as part of the yoga experience itself. Although it is often thought of as a religion, the evolution and use of yoga in the western world have diverged from its spiritual roots and have moved it more into a physical health practice.

“I believe that because yoga has become so popular, its religious origins have lost their meaning. The popularization of yoga has made it more accessible,” said Sierra. Like Kung Fu, which is rooted in Buddhism, or Aikido, with its foundations in Shintoism, the separation of the spiritual and physical practices in yoga has evolved in much the same way. “Unless the instructor clearly points out that their classes are religious and you have to do it a certain way, most classes have no religious components to them,” Sierra explained.

Although the spiritual and physical components are often separated in many modern yoga studios, people often find that the mindfulness and meditative aspects of yoga unintentionally open doors to deepening their existing connections to their own spiritual practices. “For me, it’s always been a spiritual practice—not so much as a religious practice, but it has allowed me to connect with that aspect I see as spiritual,” Sierra explained. “I think that not everybody has that component. Whatever your practice brings to you spiritually is entirely up to you to define.”

Unlimited Options
When ADK Yoga opened in the 1990s, it was Plattsburgh’s only yoga studio. Soon other studios followed suit. Hot yoga and other trendy yoga studios started to make their way to Plattsburgh. Now there are upwards of five yoga studios in the area along with the local fitness centers that offer yoga classes as well, not to mention the courses people can find online or on television.

For anyone coming to a yoga class, whether new or practiced veteran, it’s essential for the person to understand why they want to participate. “The fact that it’s become accessible to so many people I think is very good, but the risk is that it gets diluted or offered to you by people who don’t know what they’re doing,” Sierra said. “As a consumer, you have to be diligent in understanding why you want to do yoga, and what you’re currently capable of doing.” Just like buying a service or finding a babysitter, it’s important to find the right education and the right fit when either trying yoga for the first time or finding a new studio.

It’s just as important for the instructor to get to know their students and learn how to adapt. “For many students, yoga movements are challenging. As an instructor it’s my job to understand what a student can do and to support them where they are, “Sierra said. “A good instructor will meet you where you are in your practice and adapt to your needs and skills,” he added. When he meets a student, especially one who is coming in with an injury, he’ll often engage with the student to see what’s going on with them. This way he knows how to best support their purpose for coming to the class.

Not What You Might Expect
For some who have seen it on television or on the internet, yoga might seem like it means twisting oneself up into impossible poses all the while standing on one leg. This can create an intimidating perspective on something that is actually intended to create quite the opposite effect.