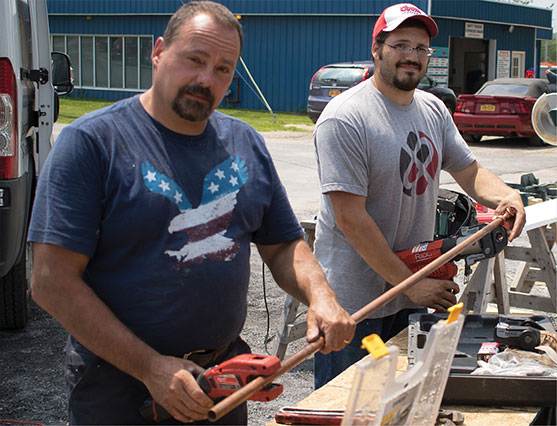 Roger Rock’s customers will tell you that he offers superior service. He also understands the benefit of being flexible in a changing economy, which makes him a very smart service provider. Rock’s early years were spent in construction, building log cabins and homes in the 1990’s when the industry was thriving. When the recession put the brakes on the building boom, his business, North Country Contracting, gave birth to Roger’s Service & Repair. The focus switched from construction to mechanical work involving plumbing, heating and electric. Home building dropped to two to three homes per year, and wiring, piping and heating jobs went up to 30 per year. When the business hit another plateau, Rock added 24-hour service to his menu and has not regretted the move. He said, “We bumped our business from 250 customers to 1500 with the addition of 24-hour availability.”

Rock is in business with his wife Cheryl. His stepson Matthew Raudenbush joined the business in 2004 and has helped to grow the mechanical side of things. The family has worked together to build an excellent reputation over the years, working out of two locations — one on the Military Turnpike in Plattsburgh and the other in Peru. When two other local heating service providers moved or closed their businesses, they passed their customers to Rock. “Lyle Matott said, “Take care of my customers for me,” Rock recalled.

While the 24-hour option keeps them busy from September to May, the Rocks know they are filling an important role. “When a customer can’t get a hold of emergency services right away we can be there. We hold down the fort. Police and emergency workers know they can trust us until they get there.” Current customers who have recently had their equipment serviced do not pay emergency rates.

Extolling the Virtues of Natural Gas

Eight years ago NYSEG found its way to Rock’s door. After sending questionnaires to the region’s homeowners to determine interest in natural gas expansion, the response NYSEG got from the community had been lukewarm at best. “NYSEG found us and they wanted to know, ‘Will people actually hook up if we run the lines to their doors?’ So we went out knocking on doors, meeting people and handing out business cards. We told people to fill out their questionnaires if they wanted this to be an option. Bernie Bassett, Town of Plattsburgh’s supervisor, was a huge advocate at the time.”

The community ultimately responded with a resounding “Yes,” and NYSEG moved forward with a four-year plan to expand natural gas availability throughout the town. Now in its second year of the “Modified Build-Out Plan” issued in the Public Service Commission Order last year, the project is projected to have all 70,000-plus feet of pipe installed in the Cumberland Head/Champlain Park area by the end of October.

Rock considers it not just his job, but his responsibility to save his customers money on their heating bills so that makes extolling the virtues of natural gas installation an easy one for him. “The benefits of natural gas are that it is 40% cheaper than other methods, there is no delivery truck or tank and you don’t pay for it until after you use it.”

For consumers looking to find the right contractor for their conversion to natural gas, there are misconceptions about how all of the pieces fit together. Rock clarified, “Customers need to know that NYSEG is responsible only for exterior buried natural gas lines. They are not responsible for gas lines inside a residence. The utility company will bring the meter yoke to the home or business. The buried natural gas line will be attached to the meter yoke. Once they have performed and recorded a pressure test the utility company will install the appropriate sized gas meter, unlock and open the gas valve to the meter.”

To play the natural gas game you have to speak the lingo. BPI (Building Performance Institute) Certification has been discussed in conjunction with natural gas conversions with its accompanying home energy audit, but it is not required by NYSEG to complete a natural gas installation for a homeowner. Selection of a qualified contractor with references is the responsibility of each home and business owner. Regardless of certification, auditing a home for energy efficiency is a part of Rock’s process at no extra charge to the customer.

Another buzz word in natural gas installation is NYSERDA (New York State Energy Research and Development Authority). The organization’s goal is to identify and evaluate cost-effective energy-efficient measures for residents, homeowners and businesses in New York State. Informational forums were held earlier this summer at Cumberland Head School to inform individuals and businesses who may qualify for additional tax credits, low interest loans or grants about how to begin the application process.

With local residents beating a path to his door for future natural gas conversion, Rock gives away a few of the secrets to his excellent reputation. “Number One: Make sure your wholesale suppliers have what you need for your customers.” He has recently teamed up with F.W. Webb and York for a reliable inventory of his most frequently needed items. “Number Two: Hire good, reliable people.” He has full confidence in Raudenbush, and chooses wisely when he needs a few part-timers to round out staffing in the busier months. As Rock moves into expanding further with air conditioning and refrigeration services, both rules will continue to apply.

One customer who sings Rock’s praises is Mike Farrell, co-owner of McSweeney’s Red Hots. Farrell first used Rock’s services after the flood of 2011, when McSweeney’s Route 9 North location by the City Beach took a hit with major water damage. “Roger and Matt are a two man crew so the work may not go as fast as a ten man crew, but when it’s done, it’s done right,” said Farrell.

Rock and Raudenbush are currently installing roofing and siding at McSweeney’s Route 3 location and when all systems are go, they will be responsible for adding natural gas capabilities to all the McSweeney’s Red Hots locations in town. They will be dual capability systems, natural gas and propane, so that the owners will be able to select the most economical heating method at any given time for all three locations.

Never at a loss for words, Rock’s service motto makes sense, “If we can’t fix it, we don’t bill you.” Sounds simple, but this is a small community and, as Rock said, “We always have to do our best.”