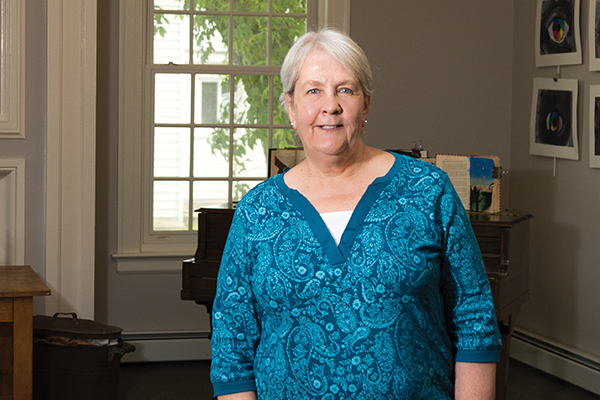 Community Involvement: Co-chair, the United Way of the Adirondacks annual campaign (2016); served on the campaign team for 18 years, Human Services Coalition, United Way Citizens of the Year in 2018, past president of the Ladies of the Elks in Keeseville.

In high school, Marge Garcia set her career goal as high as she could imagine was possible. At that time, her dream achievement was to become an administrative assistant. Fast forward 38 years and you will find an accomplished community-focused woman who just retired from her senior level position at Adirondack Community Action Program (ACAP). Clearly, Garcia has far surpassed her early goal.

Garcia married young and spent time helping on her in-laws’ farm in Lewis while raising her young son. When her husband lost his job, both set out to find work. Marge sought the assistance of the employment arm of the Adirondack Community Action Program (ACAP) in Elizabethtown. To her surprise, she landed a job with the agency. She began her career as a copy clerk. She loved the work from the very beginning and was soon tapped to be a receptionist/intake clerk and later an employment and training counselor. Over the years she moved up the ranks to eventually fill the role of Development Coordinator.

Throughout her career, Marge and her husband Bruce have been agents of community support and goodwill. Marge’s many years of service to the United Way of the Adirondacks is just one example of her commitment to improving the lives of the people who live and work in her community.

MG: I am proud of the opportunities I have been able to bring to kids. I grew up in this rural community and I have seen that there is a big need to provide learning opportunities to young people here. In bigger cities there are all kinds of opportunities for kids to learn that are just not available in rural communities. That was something I felt strongly about, so I learned how to write grants. I worked with our Child Care department to start four after-school programs in the county. I became invested in building children’s programs and helping to keep them running.

SB: What important lessons did you learn early in your career?

MG: There is a difference between a job and a career. My first supervisor was very specific about doing things right. I learned to strive for perfection and to do things well. Don’t work just to get things done, but do your work as well as you possibly can. People want to know that you are committed to doing a good job. I don’t think I initially came to work with that attitude. I had to learn it.

MG: That would be my husband. When I first started working at ACAP, he was the Employment and Training Director. Not everyone has someone in their lives who really believes in them and sees their strengths. Bruce has a way of making people feel that he believes in them and in their ability to succeed.

SB: What is one challenge you faced in your career and how did you overcome it?

MG: The Even Start program is a good example. We applied three times for that grant. After being denied the first time we went to the funder and asked for feedback. We listened and worked hard to improve our chances in the next round but they said no again. Before the third application, almost everyone in the agencies we were working with was ready to walk away but I wasn’t ready to give up. Persistence was the key to making it happen.

SB: If you could start your professional career over again, what would you do differently?

MG: I would have continued my education. I started taking some college courses but life got in the way and I did not stay with it. In this day and age, education is an important part of success for so many jobs, and I think it would have been helpful to me.

MG: Success is very personal to me. It wasn’t my goal to become a grant writer. My success has come because of my goals and where I wanted to go in life. I think that people put too much emphasis on what success is, when in fact we have successes every day. Success is found in the little things that you do — things that bring you the feeling that you have accomplished more than you had hoped.

SB: What habits do you have that contribute to your success?

MG: I am organized, focused and I have a strong belief in what I do. Part of it comes from my relationship with my husband. We both have a strong commitment to community, making a difference and helping others to achieve their goals.

SB: What is your favorite quote and how does it speak to you in your life?

MG: “Be the change you want to see in the world.” I think that change starts with ourselves. In my career I have tried to model the behavior I expect from others. That applies not just to the clients we serve but also the staff. If they see that you have an honest belief and commitment to make something better, they will jump in and help work toward a common goal.

SB: Who is someone in the North Country you admire and why?

MG: Janet Duprey. I like Janet. I have been in human services and on the edges of the political scene for many years. I remember the ‘good old boy’ networks of the past, and I have heard her talk about that. She must have some fascinating stories about her many challenges and successes. I admire her persistence and her steadfastness. She has said that her Irish background really helped her push through things and not let anything stop her.

MG: I love the outdoors and I walk every day. I enjoy hiking trails. Some of my favorites are Willow Hill Farm and Heyworth Mason Park. I like to travel. My husband and I made a commitment years ago to travel and we have done a lot of that. My grandchildren are a huge part of my life. We spend a lot of time watching basketball, football and softball games and following them around. They are the greatest part of growing older. I love watching them as they grow and seeing their enthusiasm.

SB: If you could have dinner and spend an evening with any well known person, living or dead, who would you choose and why?

MG: Michelle Obama. I am a huge fan. During Obama’s presidency I admired her positive attitude and the causes she championed while she was First Lady. She did a lot for children and that just touches my heart. People need to see that supporting children is important and become more invested in those initiatives.

MG: I would like to be remembered as someone who made a difference, was a team player, worked hard, and followed up on the things I believed in.

MG: I am looking forward to taking the summer off. After I totally disconnect for a while, I will consider going back to ACAP as a volunteer. There will definitely be more travel. I have a part-time summer job, just for fun, at Santa’s Workshop. I will be working at the Post Office and I have also applied to be a supervisor for the census.

MG: We need to do more for the aging population. In Essex County there is a huge aging population. There are initiatives to get people to stay at home and age in place but there needs to be a lot more support for those initiatives. It is hard to keep aging relatives at home when caregivers are hard to find. Unemployment is down and people don’t want to do those jobs because they don’t pay well. Mercy Care for the Adirondacks is a leader in the initiative to change that but more support and training in this area is needed.