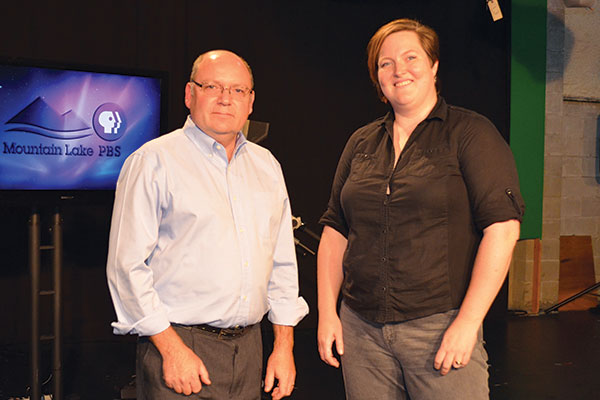 converge (v):
to come together and unite in a common interest or goal; to gradually change so as to become similar or develop something in common (Merriam-Webster, Third edition).

Media is converging and murky, and marketing it is also changing,” said Erik Nycklemoe, president and CEO of Mountain Lake PBS as he spoke to SB from his office at One Sesame Street in Plattsburgh. Beginning his career at National Public Radio (NPR), a privately owned, non-profit media organization in 1989, Nycklemoe disclosed that “the differences between radio and television are big enough, but there have been amazing changes in all media content and delivery over these 25 years, and especially so in the last five years. Right now, our focus is on how to get content out in the multiple places our viewers are. Not everyone watches television.”

According to a new study by the Media Insight Project, millennials (those born after 1983) consume information and entertainment in strikingly different ways than previous generations, and their paths to discovery are nuanced and varied. This digital generation tends not to watch news and TV programs on television, in separate, 30-60 minute segments. Instead, information and entertainment are woven into social media sites (Facebook, Twitter, Pinterest), YouTube, cable and streaming services such as Roku. Millennials, and others who are changing their viewing practices, connect to the world generally through phones, laptops and iPads, to mix news with social connection, problem solving, social action, and entertainment.

Jennifer Kowalczyk, Director of Communications at Mountain Lake PBS, affirmed Nycklemoe’s analysis. “We have a TV station, and we present programming that our loyal, long-term television viewers look forward to. In order to reach a broader audience, however, we need to stay on top of what the trends are. You need to be on any platform where people are looking for programs. The secret to online marketing is to be more aggressive. It’s not enough to post a link. We have found that we need to understand the algorithm of each platform and tailor our programming in format and length. We also adjust the style our content to fit each platform. A 30-minute segment may be fine for TV viewers, but those with a shorter attention spans, who watch it on their laptop or phone, appreciate short four to six minute segments.”

Exploring Mountain Lake PBS on different platforms, searches in YouTube resulted in such diverse choices as kids’ games, news shorts, NOVA, and documentaries. Mountain Lake’s web site (mountainlake.org), is attractive, easy to use and offers everything online viewers want, including four blogs: A Tourist at Home by Kevin Cooney, focusing on dining and activities in greater Plattsburgh; Gen’s Delights by Genevieve P.M. Roy, focusing on greater Montreal, a studio blog written by Nycklemoe and others, and Art Director Paul Larson’s Spotlight. In addition to an online presence, Mountain Lake PBS Passport iOS or Android phone apps are available for free download giving users access to an extended video library, and allowing them to watch national and local PBS programs on their phone.

“As a media organization, when there’s a new platform, we grab it. You have to be everywhere, and it has to be soft touch. PBS content and production values must always respect people’s intelligence, show good manners and be a safe place for children, regardless of the platform,” said Nycklemoe.

Both Nycklemoe and Kowalczyk credit Kevin Cooney, Mountain Lake PBS’s Digital Marketing Specialist, who develops the marketing strategies for content on social media, the web site and phone apps, for his expertise throughout this digital convergence. Cooney creates print, video and other online promotions and e-mail campaigns to get the Mountain Lake PBS message out, as well as do the necessary donor outreach and fundraising every non-profit media organization does to fund its programming and productions. Different platforms allow Mountain Lake PBS to survey and fundraise from different groups of people with different viewing tastes.

All these digital platforms, however, do not diminish the importance of traditional TV broadcasting. To date, Mountain Lake PBS broadcasts via antenna reception, cable or satellite providers to 3.9 million viewers throughout New York (400,000 viewers reside in the Plattsburgh/Burlington market), and in Vermont, Ontario and Quebec. To this end, Mountain Lake currently has three channels: Mountain Lake PBS, Classic Arts Showcase (performance, visual arts, film), and MHz Worldview (international news and entertainment in English). Being added to this repertoire, in January 2017, is PBS Kids 24, a new channel featuring kids’ cartoons, 24/7. Many national surveys show that PBS helps young children, who watch television, learn reading, math, and social skills, and PBS has consistently been a leading innovator and educational media for kids.

“You have to be contextual,” stated Kowalczyk. “The dominant way young children get their media is through TV, hence PBS Kids 24—high-definition TV channel that is entertaining and brings that engaging, inspiring content PBS is known for.”

Kowalczyk also confirmed that the Francophone viewers in Quebec watch Mountain Lake PBS due to its English content. “Our Canadian board members tell us they allow their young children to watch PBS because it helps them learn English,” she said. “We do, however, acknowledge our Francophone watchers through the Gen’s Delights blog and Dans la Metropole. We have had a thriving cross-border partnership with our Canadian viewers. Sixty-percent of our donations come from Canada.”

In order to expand into, and continue to learn about, the Quebec market, Mountain Lake PBS has two people who work in Montreal—one to sell underwriting to businesses and organizations, the other to increase donor engagement by working with Les Amis Canadiens de Mountain Lake PBS, a separate organization, to receive Canadian donations.

Regardless where they go to find it, or what they use to view it, Mountain Lake PBS viewers look for, and will continue to receive, programming that inspires, enriches and engages.