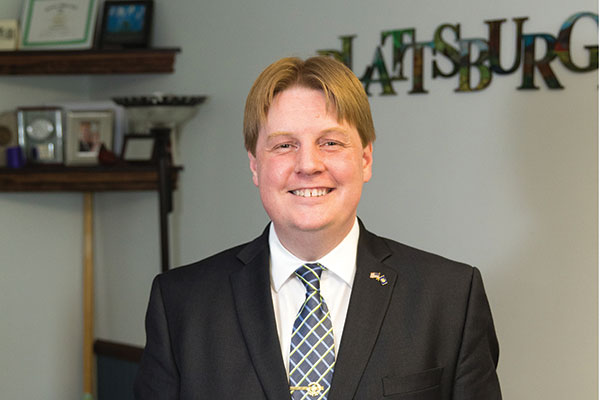 In our issue highlighting the up-and-coming generation of local community leaders, it seems most fitting to introduce Strictly Business readers to the youngest person ever elected to the position of Town Supervisor in Clinton County

Michael Cashman came to the area as a first-year SUNY Plattsburgh student 17 years ago. Throughout the various leadership and service roles he played in his career on campus as a student, and later as a college employee, he has stayed focused on ways to serve his community. As a grad student, he was elected president of the Student Association, and was later recognized for performing over 1,000 hours of community service during his time on campus. He gained an ardent appreciation for both the needs and the generosity of this community through service on the United Way allocations committee, and sought to involve young leaders by being part of the formation of the Adirondack Young Professionals group and serving as its founding president.

After completing a graduate degree at SUNY Plattsburgh in 2007, Cashman was hired by the college, where he worked in alumni relations and student involvement for over 10 years. In 2013, he was elected to the Plattsburgh Town Council. At the time, he was the youngest person ever elected, but that title has since been re-assigned to Meg LeFevre who joined the Council in 2014. When former town supervisor Bernie Bassett announced his retirement, several mentors encouraged then-Councilman Cashman to run for that office. His successful campaign put him in the town supervisor’s seat at the beginning of 2016.

Although he hails from Massachusetts, Cashman now considers Plattsburgh his true home. “I’ve always taken the position that when you find the place where you can lay your roots down—that is your home,” he explained. Cashman sat down with Strictly Business one sunny afternoon this spring to share his love for the community, his values of servant leadership and encouragement for the future generation of leaders.

SB: Where did your passion for volunteerism and community service come from?
MC: A very significant influencer in my early life was my aunt Hazel Booth. She lived to 103, and was very involved in her church and a few other civic organizations. She modeled the expectation of giving back, and would always bring me along. My mother and stepfather also instilled in me the importance of servant leadership and making time to give back to the community when I was in high school.

SB: What does ‘servant leadership’ mean to you?
MC: It’s the idea that there is a call to serve the greater good within one’s community. Serving means giving more than one receives. This value was developed in me very early in life. Community service was the way I structured my undergraduate experience. Much of what I did co-curricularly in college was community service activities. From Food drives to mentoring…to you name it! I continue to look for ways to serve the community. To bring voice to those who don’t have a voice, but also to lend my time and talent wherever I can.

SB: What are you most proud of professionally?
MC: This sounds odd, but I struggle with concepts of legacy and professional pride. I’m proud to serve. I’m proud to have been given the opportunity to represent what I believe is one of the most dynamic, remarkable, and special regions. That really humbles me. I know that there is a certain percentage of people who didn’t vote for me, but I still consider it my honor to represent them as their public servant. It all goes back to that servant leadership model. Service is a responsibility. Any day that I can do something for the greater good is a good day.

SB: Who was your most influential mentor?
MC: For me, it isn’t one single person. I’ve always take the approach of having a mental ‘board of directors.’ These are the folks who really helped to steer me in the right direction. In my early years, it was my grandfather. Then college staff like Bill Laundry and Dr. Michele Carpentier, to William Johnston—a former President of the NY Stock Exchange who I served with on an honor society board. Locally, Mike Mannix was an early mentor who I had the very good fortune to know while I was an undergraduate volunteer for the United Way.

SB: What qualities do you believe are necessary for success?
MC: Be adaptable. I was once told that change is the only thing that is constant in life. With all the great things happening in the greater Plattsburgh region, we will continue to see our region going through new changes. Another part of success is that you need to be open-minded in order to see things from multiple perspectives.

SB: Tell us about your approach to management and leadership.
MC: As a leader, you need to empower your team. We have a fantastic team here at the Town of Plattsburgh that has grown through a model of challenge and support. The way that folks grow is that you must challenge them, but you also have to support them. Over the course of my professional career, my own moments of growth have come through that model.

SB: If you could have dinner and spend an evening with any person, living or dead, who would you choose and why?
MC: This one is really personal for me. My stepfather passed away a few years ago due to brain cancer. I pine for the opportunity to have another family meal with him. I think it’s as much about providing an opportunity for mom to be with my stepfather again as it is for me to be with him. Family dinner time was an important thing for us. We always did a daily check in, and really talked about how our days went. My stepfather would always say, “Start at the beginning, and don’t rush it.” Whenever we got together it was always a similar conversation; no matter if I was 7, or 27, that sense of the family dinner was defining for me. I think that is where I had a regular check-in with my values. I would always try to think about what I was doing to become more learned, and more involved in my community.

SB: What is something no one would guess about you?
MC: I serve as a marriage officer for the Town of Plattsburgh. Since I have been in office I’ve done a handful of weddings. What I love about it is that I get to be part of people’s really special day. It’s humbling when someone asks you to be part of facilitating their ceremonial life commitment.

SB: How do you work with others in difficult situations?
MC: To me there are two approaches. One is a model of communication, collaboration, and compromise. That’s how I try to approach working with people.
The other part is that as a public servant, you have to listen. As a politician, it is your responsibility to listen. Not just listen so that you can speak, but listen to first learn, and then to lead. If you’re going to serve the public, you have to listen to what is being asked of you, and what some of the problems are.

That said, I have to acknowledge that I’m not going to agree with my constituents 100 percent of the time. They’re not always going to agree with me, either. It’s not unlike the differences that you might have with your own family, friends, and business partners. I believe that we have a lot more in common than what divides us. If you take the time to listen and learn, you can usually find that common ground. It doesn’t mean that people like what they are hearing any more, but at least we can have respectful conversations where people feel heard.

SB: What do you believe the up and coming leaders in the North Country community should do today to ensure a prosperous future?
MC: People need to get in the game. I will call out our young professionals in particular. We are living in extremely exciting times in our region. Serve. Find a civic organization, or a nonprofit group, find something that you are passionate about in this community. It’s easy to be a couch sitter. Do your part to help us deliver a place that we are proud of, and a community that we are excited to live, work, and play in.

SB: What are some examples of what you think makes these ‘exciting times’ for the region?
MC: The Adirondack Young Professionals group is the perfect example. It started as an idea that that has really grown into a decades’ worth of incubating some really talented individuals who have gone on to do some great things. I look at some of the events we have now—First Weekends, and the downtown revitalization efforts, we see people very organically getting involved. The Strand Theater is another good example. People volunteered a lot of sweat equity to transform what can arguably now be described as the cultural centerpiece of the region.

SB: What do you do in your free time?
MC: We have three dogs—two beagles and a golden retriever. Dogs are certainly a central piece to our lives. Playing disc golf up in Cadyville has become a pretty big staple. I’m also learning to play traditional golf. I’m not sure I’d call what I’m doing ‘golf’ yet, but I’m learning. The other fun thing that I do is photography. I really enjoy photographing landscapes and cultural experiences that capture a sense of community.

SB: What inspires you?
MC: The resilience of people. It’s so easy in a snap judgement to be annoyed at what someone does. If you take the time to understand a person’s story, you find that we are much more complex than we give each other credit for. If you interact with someone who seems to be having a bad day, maybe it’s because they have a loved one who is sick, or they’re working two jobs just to put food on their table. I think people are very resilient. The North Country has certainly shown that characteristic in a sense of coming together as a community. The ice storm happened the year before I came here, but everybody was still talking about the way everybody came together. In recent years, there was Sandy, and even the blizzard this past winter. People put some of those personalities aside, and just rolled up their sleeves to help one another for the greater good. That really inspires me. You don’t find that everywhere.

End note: Michael Cashman is an avid Twitter user. You can find him here: @michaelscashman