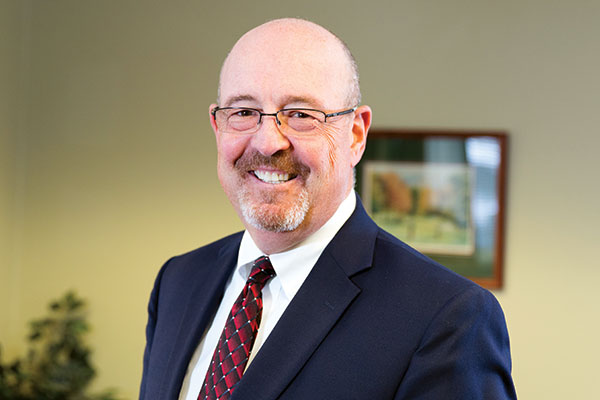 It’s hard to imagine a more quintessential example of a homegrown Plattsburgh guy than Mike O’Connor. A devoted family man with a successful career and passion for his community, O’Connor attended the former St. John’s Academy where he made lifelong friends, excelled in a variety of sports, and learned life lessons from coaches and mentors. And then he was on to SUNY Plattsburgh. “There was a significant group of us ‘townies’ who studied at Plattsburgh State, stuck around and found ways to be successful in the area,” he recalled. “These kinds of ties are very important.”

O’Connor initially geared his post-college career toward the sciences and the medical profession. He spent a few years teaching before realizing that a career in business was the right path for him. “I had a young family at the time and needed a bit more money so there was an economic motivation to move to the business environment,” he explained. After trying sales and then life insurance, in 1985 he found his sweet spot in investment advising. O’Connor started with PaineWebber which merged with UBS in 1999. A decade later he and business partner April Bingel moved their practice to Wells Fargo Advisors where he was recently promoted to Senior Vice President.

Following are excerpts from Strictly Business’ interview with Michael O’Connor.

SB: What qualities do you believe are necessary for success?
MO: Integrity, honesty, hard work, and being open to change. The world is going to change around you and you need to be adaptable. When I made the move from the insurance side of business to the investment side, I did it because it felt like the world was moving in that direction. It was a gut feeling, and it turned out that it was right. The investment business continued to grow. Making that shift really has made the difference in my career.

SB: What important lessons did you learn early on in your career?
MO: The ability to take a punch and move on, and to be open to new ideas. During my time in sales I learned persistence, and the resilience to take rejection. You’re not going to bat a thousand, so you have to learn to keep on swinging. Another thing I learned is to be open to everything. Be aware of what is around you, and keep listening. I found out that having strong partners in my life was key. My wife, Kathy, always took care of what needed to be done at home so that I had the time to pursue opportunities in the work arena. While she worked full time as well she cleared the path for me. In our practice April Bingel and I have worked with each other for 23 years. Her partnership has contributed to all our accomplishments.

SB: Who was your most influential mentor?
MO: I’ve had two: My dad and Coach Clevis “Fuzzy” Fessette.
I watched my Dad work three jobs most of my childhood. Seeing that kind of work ethic first hand had a big influence on me. He was a tough guy from New York City who moved here because of a connection to the military installation. He was a man’s man, but he was also the kind of guy who cried when our neighbors’ dog died. He left us 33 years ago, and his influence has stayed with me.

Coach “Fuzzy” Fessette was a compassionate warrior. He was a career corrections officer, and a tough, local guy who had been a very good athlete. He raised his family here, and he dedicated his time to St. Johns as a physical education teacher and as a coach. He was the guy who took us from third grade physical education class all the way through coaching us to winning multiple city championships in high school. He did an incredible job of getting us to the brink of manhood. The way he coached us and taught us the game, he prepared us for life. That helped me raise my own kids. He helped me set the stage for all the successes that came afterward.

SB: What is the best advice you have ever received?
MO: ‘Don’t worry about what the other guy is doing. Work on yourself.’ At summer basketball camp I met John Wooden, who at the time was on his way to becoming the winningest coach in college basketball history. I had the chance to sit around the campfire with him and some of the guest coaches, listening to him talk about his philosophy. He said, ‘I don’t scout my opponents. I scout myself, and my own team.’ From that day on, I have tried to apply those fundamentals to my life.

In business, it means working on executing what we need to do well, and not worrying about the competition. Throughout my career I’ve seen companies looking over their shoulders, reacting to what the other company is doing. I think you already know what you really need to do. Basketball taught me that your biggest opponent is the person you see in the mirror every day, not what your competitors are doing. Concentrate on yourself, be the best you can be, and don’t worry about the competition.

SB: If you could have dinner and spend an evening with anyone you choose, who would who would it be and why?
MO: There are three people I’d want to have dinner with. First of all, my dad. When he left us 33 years ago Kathy and I had a young family and we were struggling a bit. It would be nice to give him an update and let him know how it all turned out.

The other two would be the Pope and Mark Zuckerberg. I’d like to ask both of them the same questions. ‘Where is all this going?’ and ‘Where is the world heading?’ I’d like to ask the Pope because I’m curious to hear a faith-based perspective. As for Mark Zuckerberg, I’m not even on Facebook, but I’d be curious to know what his vision of the future really is, from the tech-based perspective. I’m curious about all the changes happening in the world and how they will play out.

SB: What is something no one would guess about you?
MO: That I like musicals. I’m not a raving fan, but I have always liked them. In college I had to sneak away from all my jock buddies and not tell them I was going to go see performances. Oklahoma! is my favorite. My second favorite is Footloose, which my son Casey and a group of his buddies performed when they were involved with the Plattsburgh High School drama club.

SB: What inspires you?
MO: People who make selfless choices for their lives. I was a parochial school kid. The Sisters of Mercy were ladies who sacrificed their lives for their faith and to teach us. When I was a kid, they were considered the ‘enemy.’ When all is said and done, long after they’re gone, I can see that these ladies gave up extraordinary things to make sure we could succeed. Thinking back on that I feel responsible to do some good things with what they taught me.

SB: What do you believe the North Country community should do today to ensure a prosperous future?
MO: Deepen the connection between SUNY Plattsburgh and our local community. We were always connected to the college growing up. The professors were embedded in the community— they were our Little League coaches and we knew them. Because of that, there was a natural draw for many of my classmates to stay here for college. The new initiative of the North Country scholarship that reduces tuition for our local students is a good thing. We need to encourage our local students to connect with SUNY Plattsburgh and give it a strong look. Those family- and community-based connections have not been the whole story for local successes, but I feel they are very important to maintain and grow what makes our area special.