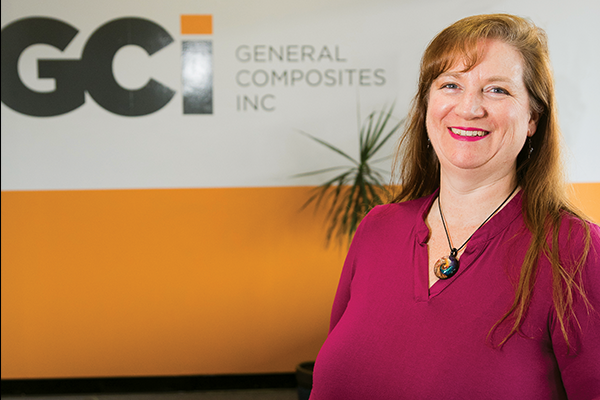 When Mimi Lane was an undergraduate studying to be a biomedical engineer, she was one of only five women in her class. Throughout her career she has managed to thrive in a largely male-dominated industry, rising to take the helm at General Composites, a contract manufacturer of efficiently made high-end composite components for virtually all markets.

Lane’s first dream was to become a pediatrician, and so she was advised to choose biomedical engineering to prepare her for medical school. However, she soon realized that her passion was more satisfied in the engineering side of her studies, rather than the medical side. “In my engineering classes, we were taught to think and problem solve,” she recalled, “All of that really spoke to me. As I went through my four years of school I came to the conclusion that I wanted to stay in engineering since I enjoyed it so much.”

After finishing her degree, Lane worked as a product design engineer in the medical industry, contributing to the creation and improvement of life-saving medical devices such as the aortic balloon pump catheter. Over the course of her early to mid-career she worked on many complex medical devices and holds patents for three. In 2004 she put her career on hold when her daughter was born. Around that time, she and her husband, David Martin, opened the well-known Turtle Island Café in Willsboro.

Several years later, Lane was ready to re-launch her engineering career. While attending a community meeting in Willsboro, she met the owner of General Composites. The meeting eventually resulted in Lane doing some project work for the company’s ISO 9001 certification. Her work so impressed the owner that she was hired to be the plant manager. “He was looking to transition out of the company at that time,” Lane explained, “Within a few years they promoted me to president of the company.”

Lane recently spent an hour with Strictly Business to share some of her career’s journeys and lessons learned.

Community Involvement: Board of Directors at CITEC, volunteer with Piano by Nature, Girl Scout Leader

ML: My second engineering manager drove some important points home for me and they have carried me well. He taught me that it is important to understand where you fit in, how you fit in, and the value that you bring to your company. If you know that, that is how you get recognized and that’s how you move forward. You are bring- ing value. If you don’t understand how you fit in, it’s hard to make the right choices and decisions

SB: What advice would you offer to somebody starting their career?

ML: Perseverance is really important. You’re going to run into a lot of roadblocks and a lot of walls along the way. It is important to find things that you like and just continue to pursue them.

SB: What did you learn as a woman working in an industry that is predominantly male?

ML: It’s a touchy subject these days. I never felt that I was dis- criminated against because I was a female, but it was a very male environment. It was uncommon, but there were women engineers before me who paved the way. I had two strong women that I could relate to who were ahead of me. When I look back at it from where I sit now, I can see that they changed themselves to be more male in their work persona. They wore really short hair and chose to wear men’s shoes and men’s clothing. I never felt a need to do that. I was always able to be myself, and I never felt I had to change who I was. I think it is important to always be conscious of being yourself. If you’re not able to be YOU, and do what you love to do, then you’re in the wrong place and you need to find a better place for yourself.

SB: Are there any advantages to being a woman in a male dominated industry?

ML: (laughing) While I always want to see more women advance, one of the nice things about where I am now is that when I go to a trade show I never have to wait in a line of ladies to use the restroom.

SB: What qualities do you think are necessary for success?

ML: Perseverance, listening, and surrounding yourself with good people. Perseverance is working hard, but it is also having enough belief in yourself that you know the right direction, and that you’re able to withstand all the forces that might try and shove you off that course. Listening is about understanding others. I have developed strong listening skills. I find that it helps me to better understand my customer, as well as being able to understand the people who work for me. Finally, surround yourself with good people. I’m a strong believer in teamwork. No one person does it all by themselves. Even some of the great idols of our day succeed surrounded by good people.

SB: What was the best piece of advice you have received?

ML: Listen first. Seek first to understand, before you seek to be understood.

SB: How do you work with difficult people?

ML: Try and understand what makes them tick and what matters to them. Typically, a difficult person is often someone who feels either misunderstood, slighted, or ignored. If you can understand what matters to them and where they feel valuable you can usually turn them around to be an asset. Quite honestly, if the fit is not good with the organization, then it’s also giving them the gift of finding a new opportunity. As hard as that can be, sometimes it is one of the best things that can happen to that individual. They rarely recognize it at the time, but after the fact they’ll come back and thank you for that. It’s amazing.

ML: I was a whitewater rafting guide in the Adirondacks during my 20’s and early 30’s. It was a weekend gig starting while I was in school at RPI.

ML: I spend time with my husband and daughter. We all ski at Whiteface in the winter. My daughter has been doing fencing for a couple of years which I recently took up as well. I also enjoy crafts and working with my hands, so I do some parent volunteering, mak- ing costumes for plays my daughter has been in.

SB: What do you believe the North Country community should do today to make sure that we stay profitable and successful in the future?

ML: I believe that manufacturing is a strong element of financial success in the United States. I don’t think it’s the only piece, but that it is important in concert with a strong service industry. I view the North Country as unbalanced in its service side versus the creation of products. We need to look at some of our pockets in the region that already have populations and development and look for ways to bring small industry into those areas to strengthen them with year-round job stability.