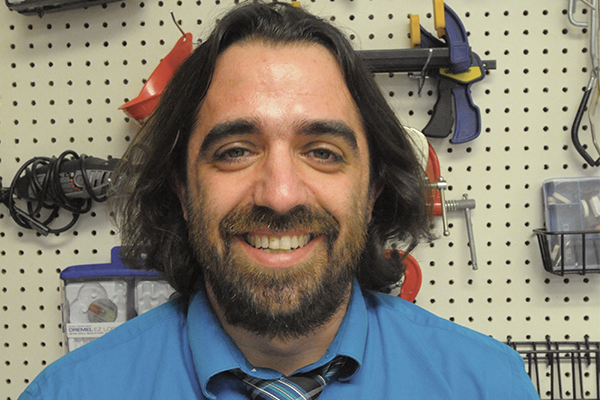 We’ve all seen public service announcements promoting Math + Science=Success. The concept is something the Plattsburgh City School District (PCSD) values and that value can be seen across the school district. Recently I had a chance to sit down with some of the teachers in the district’s high school science department to dis- cuss what they have going on.

When he was a student at Plattsburgh High School Cory Mousseau thought he’d go into engineering, but fate had other ideas. As an active youth leader, he received feedback from adult mentors who let him know they thought he was a good teacher. Mousseau realized they might be onto to something and so began targeting his credits to a physics education major. He is now part of the high school science faculty that taught him and he enjoys paying it forward. “I love when I know I have motivated my students to find things out,” he said.

While there is much to be proud of in the science, technology, engineering, and mathematics mix offered at the PCSD, the Science Olympiad Team is hands down a jewel in the crown. When I visited it was going on five o’clock on a Wednesday evening. Mousseau’s classroom was filled with a dozen students and there were at least that many in another room, all working independently on a project for the academic tournament. “I love this,” Mousseau declared as he gestured around the room. “This buzz! No one is requiring them be here. They are here because they want to be.”

Mousseau is one of the coaches for the PHS Science Olympiad team. It’s hard to wrap your mind around if you’ve never been to an event but picture it like an athletic tournament. The events break down into a variety of categories tackled by a handful of students from each team. Mousseau explained, “There are what we call ‘study events’ where the students are given a topic and the whole year, they are studying to take a test and it’s hard. There are tech events, which tend to grab the headlines because you can see what the students have created. This year our students have built a mousetrap car. That car will have to perform a given course that the students won’t know until we arrive at the event.” There are also a variety of other events for which students prepare as well.

Mousseau and his co-coach Louis Piccirillo are part of the selection process that determines which students will participate in each event but after that it’s all student driven. Mousseau shared, “Our students often score in the top ten in state and regional competitions. It’s a lot of work but we get a lot of support from the district and our fellow educators. The importance of that support can’t be emphasized enough.”

To say that PHS students score well is really an understatement. In truth the PHS Science Olympiad Team has won the New York State regional competition for 11 years and counting! A win allows them to compete as one of 50 teams from all over the state, including New York City. In addition, individual students from PHS have medaled in various categories.

As enthusiastic as Mousseau is about his team, he is just as enthusiastic about other STEM achievements in the PCSD. “The group of science educators I work with is top notch,” he shared. “We teach every single advance placement class that can be offered.”

One of the electives offered at PHS is Forensic Science. That’s Piccirillo, aka Mr. P’s, class. Piccirillo grew up in Ronkonkoma, New York and came to study at SUNY Plattsburgh knowing he wanted to be a teacher. When Mousseau called the SUNY Plattsburgh physics department looking for someone interested in volunteering Piccirillo jumped at the opportunity. Mr. P has been a part of the PHS family for the past three years.

Another important part of the PHS science faculty is Paul Andersen who has a presence on YouTube and was nominated for teacher of the year in 2011. “The best comparison I can make is that he is the next generation of Bill Nye ‘The Science Guy’. One of my huge take a ways from listening to him is ‘Don’t kill the wonder’,” Piccirillo observed. “With all the technology available it would be easy to fall into a typical lecture format in the classroom. That kind of presentation kills wonder and these kids are full of wonder. You can hear it and see it!”

It would appear that attitude is a reflection of leadership and the PCSD Assistant Superintendent for Curriculum and Instruction Carrie Zales explained, “Educators in our district develop and provide innovative experiences across content areas and grade levels for our students to engage in authentic, real-world activities that allow for application of skill sets to deepen student understanding. These opportunities are student centered and develop inquiry and collaboration skills that students can build upon from one year to the next.”

That sentiment was echoed and expanded upon by PCSD Superintendent Jay LeBrun. “One of the most notable characteristics of our school district is our co-curricular program. From instruction in four foreign languages, to numerous athletic teams, to AP courses, music offerings and elementary clubs, and more, there are so many ways in which students’ educational experience is enriched. Our STEAM offerings are an exciting piece of this co-curricular breadth, and as the workplace shifts towards more technology-based skills, interest in these programs continues to grow. Students feed off teachers’ energy, and that student enthusiasm, in turn, further motivates teachers to expand our offerings. We’re all very excited about what’s happening in our district.