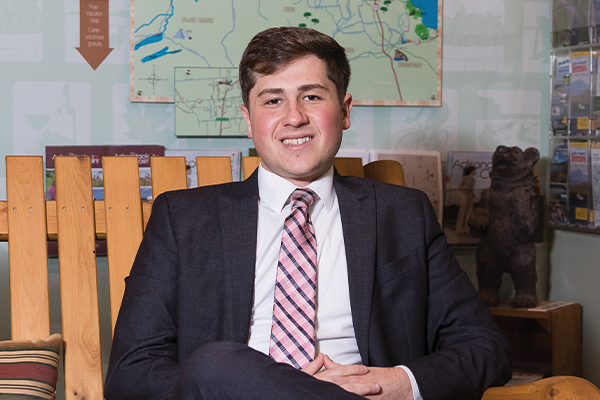 In the three years since Joel Wood graduated from SUNY Plattsburgh with degrees in Economics and Political Science, he has been busy. Wood spent nearly four years working for Congresswoman Elise Stefanik, a position he started as an intern while still in college. Later he became her constituent liaison, helping district residents with federal agency issues. And then he was promoted to regional director. In late July, Wood switched gears and was hired as the director of NAmTrans — the North American Center for Excellence for Transportation Equipment.

NAmTrans is a “strategic subsidiary of the North Country Chamber of Commerce designed to serve, support and raise awareness of the transportation equipment and aerospace cluster here in the North Country,” Wood said. There are more than 50 transportation equipment companies in the seven-county region and they represent four sectors: rail, bus, maritime, and aerospace.

For more than 20 years, since the close of the Plattsburgh Air Force Base, the North Country Chamber of Commerce and regional economic development leaders and stakeholders have worked hard to attract businesses to replace the jobs lost with the Base closure. “The positive impact that the transportation industry has had on our region simply cannot be overstated,” Wood emphasized. One of the biggest reasons, he said, is the quality of the jobs created as part of it. The Department of Labor estimates that on average an advanced manufacturing job pays $62,000 per year, while the average job is $43,000 per year. “The manufacture of transportation equipment is really working well for the North Country.”

In 2014, The Development Corporation (TDC) commissioned a study to determine whether there were enough companies in the region to justify creating a cluster support organization. The study indicated there were. The Chamber, TDC and public/private industry partners came together to make NAmTrans a reality. In June 2015, a partnership agreement was signed between the Chamber and the Quebec ground transportation cluster, which provided mentorship and guidance for the fledgling North Country group. The two organizations are “working together for the betterment of both clusters. NAmTrans and the Canadian cluster share best practices and invite each other to events. When one succeeds, the other succeeds.” Wood said. The majority of the transportation companies here in the North Country are Canadian owned.

BOOTS ON THE GROUND

NAmTrans, which is largely supported by grants, has received funding from Senator Betty Little and Assemblyman Billy Jones and also from the New York State Economic Development Council and the United States Department of Agriculture Rural Development. Wood helps with grant writing, in addition to managing the budget, the social media accounts and working to raise awareness of the companies and career opportunities that exist within the cluster. He defined his job as “being the eyes and ears of the members and developing an understanding of the needs of the transportation companies in the North Country.” Although he has only been in the role for three months, Wood has spent that time with his boots on the ground meeting with manufacturers and establishing himself in the role.

While working for Congresswoman Stefanik, Wood toured a number of the manufacturers in the region. He felt he was well informed when he started working for NAmTrans but said he knew he would have a lot to learn.

When he first reviewed the list of companies in the cluster, he was surprised by the number. “I’ve been learning a ton,” he said.

At a recent meeting with manufacturers, Wood stopped the conversation when a number of abbreviations and acronyms that he wasn’t familiar with were used. “That’s part of my job — making sure to ask the right questions. For example, if a company says it needs engineers, I would respond with questions like, ‘What type of engineer?’ ‘Is it truly an engineer you need or is that a colloquial term you use in your plant?’ Maybe they really need a quality assurance technician.”

Wood spends much of his time visiting the various NAmTrans companies to better understand not only what they do and how, but what their successes and challenges are and what resources might be needed to operate more efficiently and productively. “What we’re trying to do with NAmTrans is change the perception of what transportation manufacturing really is so that more people — especially young people — understand that manufacturing has changed and it really is a great career with high paying jobs and upward mobility,” Wood explained.

NAmTrans works as a liaison between manufacturing companies and local educational institutions such as Clinton Community College’s Institute for Advanced Manufacturing, CVTEC, Clarkson University, and North Country Community College. If an employer indicates they are having trouble finding employees with a specific set of skills, Wood can relay that to the educational institutions and work with them to develop the curriculum to fill those gaps. Virtually all of the companies that NAmTrans works with currently have job openings that run the gamut from assemblers, welders, managers, engineers, and administrative and finance professionals.

In helping to change perceptions about manufacturing, a series of career opportunity videos have been created. The videos feature employees from a number of different manufacturers in the region who explain in their own words how their job is different than they thought it would be. In one of the videos, Devon Sutton, Supply Chain Manager for LC Drives explained that she never thought she would have a career in manufacturing. “To me it was factories, and it was math problems, and it was dirt and grime and grease. Manufacturing has become an avenue for creative solutions. We’re tapping into resources all over to find solutions for modern manufacturing issues and that’s really exciting. Manufacturing has become a career path and an industry where so many different disciplines are involved.”

The NAmTrans cluster company support model is built on the idea that companies of similar types locate in the same area to capitalize on a shared workforce, to share best practices and to create more efficient supply chains. Wood compared NAmTrans approach to that of the Farm Bureau model. “NAmTrans is here to support and serve our transportation equipment manufacturers who are each unique, sometimes producing very different end products but at the end of the day, they have similar needs. We are continuing to identify those common needs and are actively working with each cluster company to help them increase efficiencies so they can succeed in the North Country.”