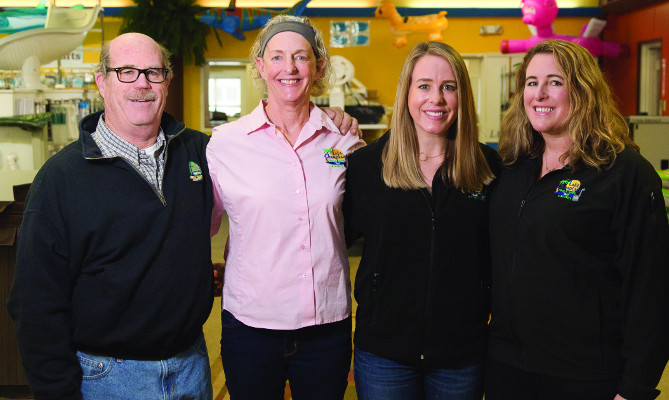 Sitting with the Hubbells in the back office of Lake Champlain Pools, Spas & Stoves (originally Lake Champlain Pools) it’s noticeable that their family has the right formula: a positive work culture, engaged employees, years of industry knowledge, and a plan for the future. Years ago, George and Kay Hubbell decided it was time to transition away from the pool business. As with most transitions, the decision was bittersweet and worrisome, but also nothing short of a celebration and nod to the future generation of leadership. Handing the reins to their daughters, Christine and Erinn, George and Kay knew the final ingredient to that winning formula could be found with the next generation of ownership in this family business.

The Hubbells started from scratch. Kay, a real estate agent, and George, a pool builder, both started from the bottom. “Once we got together, we decided to buy the apartments (Northway Apartments),” Kay recalled. They purchased the pool business, moved it into the showroom of the apartments, and lived upstairs.

The apartments were one of the Hubbells’ first projects together. Recalling some of the earlier days of both their relationship and their business ventures, George reflected on the early days of the business and growing his family: “Maui North was tucked into one of the storage garages in the back.”

Their daughters were both born when George and Kay lived in the apartment above the pool store. Both Christine and Erinn recalled playing at the business, but were never expected or pressured to take over one day. “It was something we talked about and eventually just decided it was time,” Christine explained. “We didn’t want our parents’ hard work to be handed over to someone else,” Erinn added. “Erinn used to take phone messages at the old pool shop,” George said. After George and Kay listed the business for sale, a couple of interested parties came forward and were in the beginning stages of exploring a sale; however, the sisters put their heads together and decided it was time for both of them to make significant career changes. They headed back to their North Country roots and began the process of taking over from their parents.

With years of business and financial expertise, both Christine and Erinn bring skill sets that are unique and relevant. Coming from the digital world into the pool business, Erinn pointed out, “There’s a lot of paper.” Underneath all of the moving pieces, she’s been looking at the process, how things work, how to make things better, and what’s needed to bring the business up-to-date using technology and updated processes. “There’s a formula that works and that has made the business successful, and we want to capitalize on that. But we also want to improve the process,” Erinn said.

Experience and success aren’t things this sister team lacks. Christine graduated from Northeastern University with an MBA/Master’s in Accounting. She spent the first four years of her career in public accounting, performing audits for public and private companies across a variety of industries. Shortly after her work in accounting, she moved out to the Bay Area to work for Google Express as a finance operations analyst and then onto SquareTrade as a senior revenue accountant.

Erinn’s resume isn’t at all shallow either. Starting her career as an operations analyst for Goldman Sachs in Salt Lake City, she later moved to New York City. After cutting her teeth in the finance industry she moved to Google Express as the fulfillment manager overseeing day-to-day operations for the NYC market. From there she moved to Boston and joined Wayfair as the supplier performance manager.

As they settle into new ownership, the siblings look forward to settling into their niches within the business. Needless to say, both Erinn and Christine will take Lake Champlain Pools to the next level. With the clout their educational and career backgrounds provide, it’s likely that their success will impact future generations.
Culture and Community Matters

Both George and Kay have spent the last couple of decades building not only a successful business, but also a successful culture at Lake Champlain Pools. Culture and a positive work environment is just as important to their daughters as it has been for the parents.
“They’ve spent this time building a positive image with the staff as well as with the community,” said Christine. “Continuing that image and the level of community involvement is important.” As with any business transition, letting customers know there’s new ownership in place is just as important as letting customers know that they’re still valued. This isn’t lost on the new owners and is the path they’re taking.

“Coming home is a challenge because we don’t know everything that’s going on. Our priorities are to get involved and let people know about the changes to the business,” Erinn added. As the sisters know, there are plenty of ways to get involved in the North Country, which will not only get them connected to the com- munity, but also help let people know that the store is under new management. But just as important to the siblings is getting the word out that it’s “business as usual” at Lake Champlain Pools.
Advice for the Future

With retirement in sight, George and Kay didn’t want to see their business close just because there was no one immediately at the ready to take over. The decision to sell the business and the years preparing for a sale weren’t easy. Not only was it emotional, but the hours put into preparing all of the details involved also took time and effort.

“We have friends our age who don’t have a plan for handing off their business. They don’t want much, but they also don’t want to see their businesses close just because there’s no one to take over,” Kay explained. “My advice to my generation is get out,” Kay laughed. “Make room for the next generation,” George added. “There is a lot of opportunity for young people here, and I think that’s lost on some people.”

There’s little lost on Erinn and Christine as they both expressed an appreciation for the quality of life, the commute (or lack thereof), and the opportunities for business growth. Comparing lifestyles to bigger cities, they both realized the benefit of moving home. “You can go hike, go to the lake, and be at home all in the same day,” Erinn said.
It was pretty clear that both George and Kay are very satisfied with this next move in their personal lives, the life of their business, and the lives of their daughters. As for Erinn and Christine, keep an eye on these rising stars of the pool business, and of Plattsburgh. It’s likely not the last time you’ll hear their names.