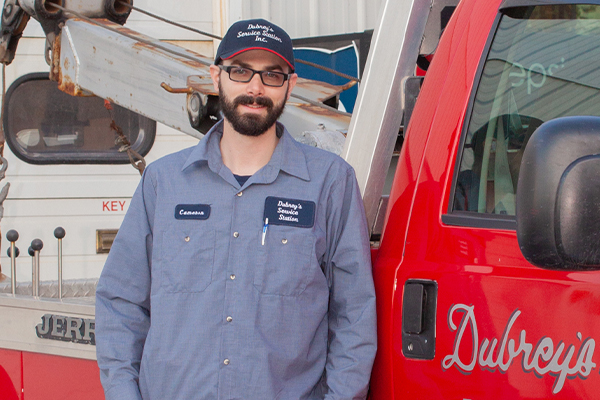 For more than 60 years, there has been a gas station on U.S. Avenue in Plattsburgh caring for drivers and their vehicles. The company’s core values have always been about providing a positive customer experience.

In 1960 Jim Dubrey Sr. purchased the station. He had served in the motor pool of the U.S. Army at Fort Dix and learned about automotive repair. He operated as a Sunoco station for 25 years before transitioning to Citgo.

Today Dubrey’s is a full-service gas station with a repair shop and a 24-hour towing service. Jimmy Dubrey Jr. started working with his father in 1976 and bought the business in 2000. Now, he is looking forward to spending more time with his grandchildren and his dog Cooper who typically accompanies him when he comes into the station. “I’m on my way out,” the younger Dubrey joked as he talked about approaching retirement. He typically stops in a few times a week for coffee and to check up on the next generation. On the day of our SB interview, he was there working on his own vehicle and was eager to weigh in on the business.

No Cigarettes and No Beer
Dubrey’s Service is not your typical gas station – there is gas for sale, but it is a service station and not a convenience store. “There are no cigarettes and no beer,” Dubrey said. Inside the front door is a small office with a counter and two chairs for customers who choose to wait for their vehicle while it is being serviced. Besides a coffee pot that keeps the staff well caffeinated, you won’t find any coolers with drinks, racks of snacks or lottery tickets.

New customers who stop in for a fill up are often surprised when one of Dubrey’s Service employees comes out to pump their gas and wash their windshield. Dubrey’s is one of very few stations in the North Country that is full service.

Back in the 1960s, Dubrey explained there were 37 full-service gas stations in the city. “They were on every corner,” he said, adding that although there were fewer cars in the 1960s, they were far less dependable than they are today.

“We are the oldest service station left in Plattsburgh,” Dubrey said, adding that he is proud to have been able to keep his father’s business going for so long.

The station’s proximity to Plattsburgh Air Force Base gave Dubrey’s a steady stream of customers until its closure in 1995.

Back in the day when the business first opened, Dubrey’s rented U-Haul trucks and trailers. They continued that part of the business for 25 years.

After the 1980 Winter Olympics in Lake Placid, Dubrey’s became a National car rental location, which they continued for 20 years. “They were good sideline businesses,” Dubrey said. “You couldn’t make a living off any of them, but they really helped supplement. Today we’ve got the gas, the repairs, the towing. Not one of them alone would you ever make a living off of, but you put them all together and you can get by,” Dubrey noted.

Safety Protocols
As a fuel supplier, it is imperative that safety be front of mind for all staff. There are procedures and safety protocols that need to be followed and equipment must be checked regularly to ensure it is working properly.

The fuel tanks and hoses all have double-wall containment, so if there is a leak, it leaks into itself, Dubrey explained. Two hose lines and a pump move gasoline from storage tanks in the side yard to the gas pumps out front to fuel vehicles. Green containment boxes hold any fuel leakage and the containment boxes are inspected weekly.

ll staff pump gas and are C-certified in dispensing fuel. Dubrey is A-certified which allows him to lead the C-certification training for staff. “It is not so much putting the fuel in the vehicle. It’s what to do if something goes wrong,” Dubrey explained. “Dispensing fuel is the easy part, but what happens if you have a spill?” All staff must know phone numbers to call and how to use the spill containment kit with booms and speed dry. Fortunately, there haven’t been any spills or issues that they couldn’t contain and manage. “You’re standing right there so if the nozzle doesn’t shut off or the hose breaks, you can shut the system down right away,” Dubrey emphasized.

New Generation
The time is right and Dubrey is set to turn over the keys to the business and enjoy retirement. Ready to step in to the leadership role is Vice President Cameron Racine who came to work for the company five years ago. ”I grew up in the towing business with my dad,” Racine said. “My prior experience was primarily on heavy trucks and equipment.” Dubrey’s daughter Tracy Brown-Hemingway came on part-time to fill in six years ago and now works full time in the office.

Currently Dubrey’s Service has five employees in house and two on-call tow truck operators. “I work out in the garage with all the guys. I help Tracy out in the office and I pump gas. We all work together really well,” Racine offered. Brown-Hemingway added that they have a great team and she thinks of them as her “work family.”

Although she enjoys the people she works with, Brown-Hemingway said the customers are her favorite aspect of the job. “A lot of our customers have been coming here for a long time,” she said, adding that many rely on them for advice and trust and value their opinions. “Most of our customers are very loyal,”
Dubrey added. “They like the idea that they are dealing with the same people all the time. We explain everything the best we can so they understand what’s going on.”

With winter coming it was interesting to learn that hoses on the ground beside the pumps at Dubrey’s are connected to a bell that chimes inside, so when a customer pulls up to the pump, staff is alerted. “Even when the temperature is below zero, if you dress well, it’s not too bad,” Racine said. “You’re only out there
for a minute or two.” Brown-Hemingway agreed and explained that many of their customers are elderly or have disabilities that make it challenging to pump their own gas. “Even though you’re freezing out there, you know you are doing it for someone who can’t do it for themselves,” she said.

Racine emphasized that since the business’ inception in 1960, they have operated under the values of taking good care of customers and providing honest service. Old time values in an ever-changing industry.