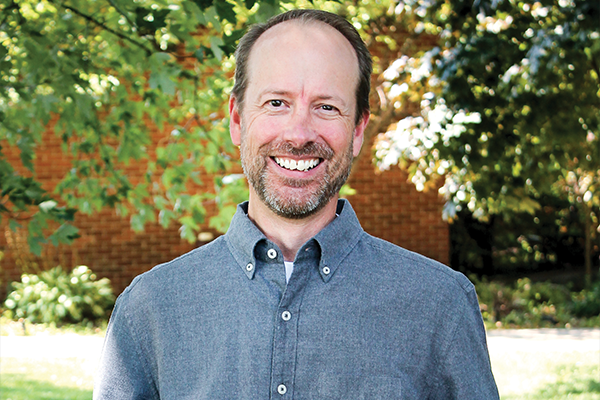 Michael Reynolds is a happy man, working at a job he proclaims a boundless affection for. He’s an architect based in Malone, New York who has a specialty for Great Camps and boathouses, but who also designs courtrooms, beach bath houses and medical buildings as well.

Reynolds has a back story that seems like he was on an inevitable arc. He grew up in the resort town of Cazenovia, near Syracuse, in a gigantic wood shingled summer house, three stories tall and 9000 square feet. Throughout his childhood he worked alongside his industrious parents to make it into a year-round house, insulating, repairing plumbing, rewiring and so on. He loved the work and developed an affection for handsome old houses. However, when it came time for college, he followed his own path and graduated from Plattsburgh State with a degree in psychology. A career discovery program at Harvard steered him back to design and enrollment in an architecture program at Boston Architectural College. He also earned a Master’s degree in construction management at the New York School of Environmental Science and Forestry.

Living in Boston, Reynolds learned city life was not his style. After graduate school he fell into a job at an architecture firm in Malone. He and a partner bought the business in the late 1990’s and in 2000 merged with Beardsley Architects + Engineers, DPC, a multifaceted engineering and architecture firm with offices in Syracuse and Auburn, NY. In 2012, Reynolds became a registered architect, licensed to practice in the state of New York.

A recent project that has kept Reynolds busy is the Implant Dental office owned by Kurt Kline, DMD, in Plattsburgh. The building has an understated traditional exterior with many tall windows. Inside, there are few interior partitions and high ceilings that lend an airiness to the sunlight flowing in. You know where you are when you’re inside because there is always a way to see the outdoors. This was done on purpose, as was hiding the wiring, plumbing, air conditioning, suction, and waste in the concrete pad the building sits on.

Reynolds wanted to ensure that patients were put at ease by making their surroundings pleasingly simple and filled with natural light. Another thoughtful design feature is for patients who have been sedated. After their procedures they are wheel-chaired out to their rides home by way of a side door adjacent to the procedure rooms. With this set up they go directly to the waiting car.

The procedure rooms have large windows, but with special glass that lets you see out but not in. In the fall of 2018, the American Institute of Architects awarded the Kline building a Certificate of Merit for its outstanding design.

Dr. Kurt Kline is a leading practitioner of dental implantation, and offers seminars for other dental professionals on his techniques and procedures. His classroom has two large window walls with a wavy acoustic ceiling and two oversize monitors in front with specially coated screens that allow easy visibility in bright light. Operations happening at the other end of the building can be shown to classes on the screens, and the room is well ventilated to prevent drowsiness.

The design philosophy behind the building is to provide a safe and comfortable experience for patients on a human scale. While Reynolds noted that it would have been less expensive to simply build a two-story office box, the accompanying sterility and lack of personality were unacceptable to Dr. Kline. To all of them, a good patient experience was of paramount importance.

In every construction project, there are three main parties. The owner who has the vision and funding, the architect who works with the owner to develop a practical plan and coordinates the project and the contractor who turns the plans into a real building. Also working with the architect on complex projects like the Kline building are engineers who specialize in the building’s components such as the foundation and utility systems, site work, parking and water control, among other concerns.

I asked Reynolds how he went about creating a technically advanced structure like Implant Dental. He explained, “Dr. Kline spent years studying other offices, taking photos, asking questions, and came to me with a strong vision of what he wanted. He had done his home- work. What he needed was a way to bring his ideas together into a unified whole.”

Reynolds outlined the steps he takes with new clients to go from the seed of an idea to a successful completion. He emphasized that long before ground is broken, the architect needs to listen to the owner and understand his or her motivation. It is at this point that Reynolds’ background in psychology is useful. The architect must have empathy with the owner, an understanding of their budget and passions, their sense of style and, of course, their proposed schedule. As Reynolds said, “You read the person as best you can.” Most of Reynolds’ clients are first timers who have no experience with big projects. The clients’ lack of experience makes for a challenge, but he truly relishes challenges. Summing up the design phase, Reynolds emphasized, “Work with what you’ve got, and we’ll help you get there.”