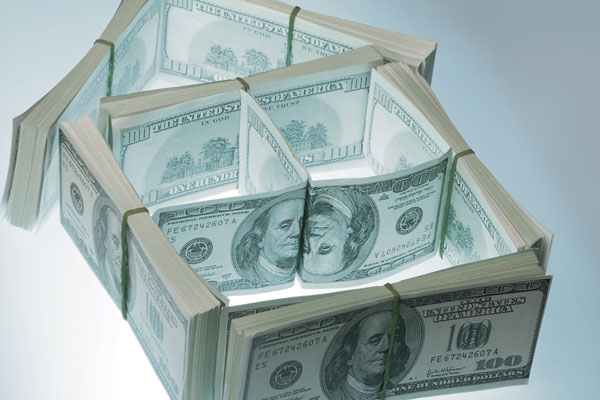 IV. Property Taxes Are Often Misused
to Subsidize Municipal Services That Should Be Self-Sustaining.
Property taxes are a source of revenue municipalities use to subsidize expenses associated with numerous governmental activities. Often shortfalls in a particular service are covered through the property tax. For example, if a municipality provides trash collecting services and there is a shortfall, it is often more convenient to not annoy voters by increasing the cost of the trash collecting services. The more politically expedient way is to continue the very attractive trash collection service at a discounted price and make up the shortfall through the property tax. The same is true of many other services: dog licenses, recreational activities, et cetera. The problem with this approach is that people who are not using the trash collection services or do not have dogs or do not avail themselves of certain recreational programs subsidize those who do through the real property tax.

As seen in Table 1 above, New York and New Jersey vie for the dubious distinction of having the highest property taxes in the nation, with New York holding the top two spots and five of the top twelve. In Table 2 below, property taxes are shown as a percent of home value, for the top eight counties in the United States. Here the picture for New York is even more distressing, New York holds the top six spots and seven of the top eight with only a single county in Michigan joining New York’s counties on this list.

V. What Can New York State Do to Reduce This Overdependence on the Property Tax?
A. Allow Counties to Increase Their Sales Tax Rate

Almost every county in New York State has raised their sales tax rate to 8% or beyond. In fact, only seven of New York’s 57 counties have a rate below 8%. There is a reason for that. It is not simply to collect needed tax revenue, which could have been done by increasing property taxes. The fact that almost every county has raised the sales tax to 8%, (NYC and Yonkers have the highest sales tax rates at 8.785%) is evidence that sales tax is a convenient tax to collect and in many ways far less burdensome then the real property tax. The tax is paid in small amounts as consumers spend. Many necessities are exempt from the sales tax, so to some degree, individuals have control over the amount of sales tax that they pay.

One major complaint regarding the sales tax is that it is regressive, which is true in certain cases but in general is far less regressive than the real property tax. It is true that people with high incomes who purchase a certain item pay the same amount of tax as a poor person who purchases the same item. The reality is that consumers with higher incomes spend more and thus pay much more in sales tax. For example, a family with a modest income that purchases a car for $10,000 is subject to an 8% tax on the $10,000. The wealthier person who purchases a $60,000 car will pay six times the amount of sales tax. Of course, this depends on both the income levels and expenditure levels for the two groups. However with the property tax, lower income families have to pay their property tax bill without any exemptions (except for the New York STAR program, which all homeowners receive), such as they might receive with sales tax on food expenditures. Further, higher income individuals can typically deduct mortgage interest payments on their federal taxes, while lower income families who do not own a home cannot.

To illustrate the power of the sales tax for Clinton County, if this tax were to increase from 8% to 10%, the additional amount collected would be more than enough to eliminate the Clinton County property tax. (We perform the calculation below.) This assumes of course that the State of New York would allow Clinton County to keep all of the additional sales tax revenue, see Table 3. We think most taxpayers would favor this arrangement because of its simplicity.

Table 3 illustrates the potential of the sales tax to reduce the property tax. 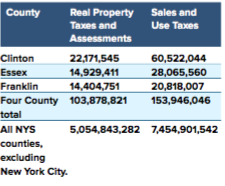 www.osc.state.ny.us/localgov/datanstat/fin- data/index_choice.htm (Once at the OSC website, select county data and the year 2013 in order to view or download the data)

The sales tax rate for most New York State counties currently stands at eight percent, with New York State keeping four percent and the coun- ties also receiving four percent. If Clinton County wished to eliminate its property tax and raise the same amount of total revenue simply using the sales tax, we estimate this could be accomplished by increasing its sales tax from 8% to 10%. That is, Clinton County currently brings in over $60 million on a 4% county sales tax rate; so increasing this rate to 6% should, theoretically, bring in an additional 30 million. Even if sales declined in the county due to the higher sales tax rate and only $23 million in additional sales tax revenue was garnered, this would be more than enough to eliminate the County tax.

B. Pledge That the Entire Proceeds from the Additional Sales Tax Will Be Used Exclusively to Reduce Real Property Taxes
A valid concern the public might have is that raising the sales tax will not result in a reduction in the property tax. Including language in the law that the increase in revenue from sales tax must be used exclusively to reduce property taxes would address this concern.

C. Acknowledge That New York State Has Considerable Responsibility for Local Taxes
Taking responsibility for increasing taxes in not something politicians like to do. However, when state officials are asked about why taxes are so high the response is often along the following lines. You see people often make the mistake of lumping all taxes together. Taxes have increased but for the most part these increases have occurred at the local level, i.e., school and property taxes. To get these local taxes under control you should speak to your local supervisor or school superintendent to see what can be done. This type of answer is mis- leading. Actions taken at the state level have an enormous impact on local taxes. Unfunded mandates and reductions in funding are two very big reasons why local property taxes increase. To pretend that state actions do not dramatically impact local taxes is a serious impediment to resolving New York State’s high property taxes.

The views expressed in this article are those of the authors and not those of any party they represent.
Reprinted with permission from: Municipal Lawyer, Fall 2015, Vol. 29, No. 3, published by the New York State Bar Association, One Elk Street, Albany, NY 12207