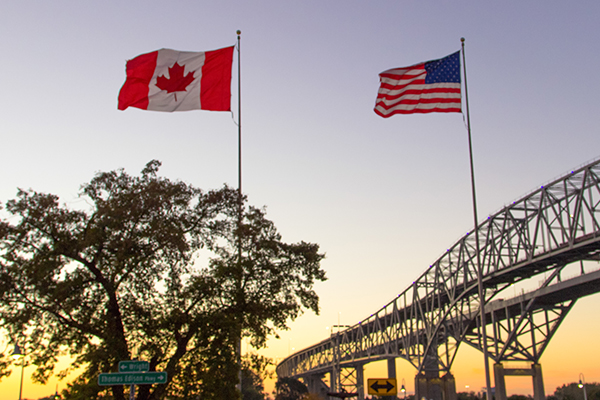 The relationship with our Canadian neighbors has been devastated by COVID and the long-term inaction of both the Trump and the Biden administrations to find ways to reopen our land borders. On Wednesday October 13, 2021 we learned that the border will open on November 8th to vaccinated Canadians. However, the initial release does not describe the necessary documentation that must be presented to Customs and Border Patrol.

I am hopeful that when the border reopens, we will see a surge in Canadian activity at every level, commercial and retail. On the commercial side, I would anticipate a significant number of new companies establishing operations in Plattsburgh as they have done in the past, which many put on hold pending COVID.

The recent Canadian elections resulted in the Liberals securing 157 seats, the Conservatives 122 seats, the NDP 27 seats, and the Quebecois 15 seats. It is clear that Canada will have a minority coalition government most likely made up of the Liberals and the NDP. This result also poses significant issues to the leader of the Conservative party who had predicted victory, and likely there will be an internal struggle to determine whether or not the current leader continues or a new leader is selected. There will be very little impact on the United States as a result of this election, and I think we can anticipate few, if any, changes in policy and attitudes.

The Canadian Chamber of Commerce is pressuring Federal leaders in all parties to begin a discussion about becoming a world power in the production of minerals and rare earth elements. Canada has an adequate if not significant deposit of these critical minerals and metals and the Chamber believes that a strategy should be developed to take into account how to maximize this position. China and Africa are the other two sources of these minerals and metals and China has made it extremely difficult to access them by individuals and entities outside of the country as well as it has put pressure on the utilization of these minerals and elements within China. In other words, any manufacturing you do that uses these materials has to be done in China. This is an interesting play and the United States needs to be very careful how it interacts with Canada to ensure that we have adequate access to these minerals and metals.

Canada had an unexpected and dramatic jump in July in its trade surplus to $3.23 billion. This was the largest surplus since 2008, as it beats analysts’ estimates of $.68 billion with exports leaping 8.7%, hitting a record $53.76 billion. In typical Canadian understatement, the Chief Economist at Canada’s Export Development Agency stated, “This is a very pleasant surprise.” In August the trend continued with the surplus increasing by $1.9 billion again, beating expectations. Imports rose 0.8% and exports declined by 1.4%.

In the beginning of August Canada advised that it will take up the battle against Buy America and its impact on the USMCA. The focus of the Canadian Government is on the integrated supply chain. They will get support from border communities and even the State of Georgia where a number of Canadian products go to be further manufactured or have parts added. If the Buy America provisions take hold, those jobs could disappear. This is an example of how Buy America could adversely impact supply chain operations and needs to be carefully reviewed before any dramatic action is taken, otherwise we will see costs increase and jobs will be lost.

The U.S. Court of International Trade recently announced that it was doing away with a rule that allowed for specific challenges to tariffs, particularly in the lumber arena. This has been a frequently used procedure by many Canadian exporters of lumber to the United States to challenge, and in many cases, rid themselves of the tariffs. It is an unusual move, but it appears that with the softwood lumber wars continuing, the U.S. government is looking for ways in which to put more pressure on imports from Canada. This makes absolutely no sense on so many levels including the fact that lumber prices had soared and are now dropping. However, tariffs only increase prices in the U.S. Even if eliminating tariffs would have some negative impact on U.S. softwood lumber producers, they represent a small segment of the economy. The second issue of course is Canada’s long-standing relationship with the United States at many levels including participation as our allies in Afghanistan.

Canada’s bond yield rose in August across a steeper curve mirroring U.S. Treasuries with Canadian 10-year notes near their highest level since June of this year.

Canadians have been the source of COVID humor. As an example, “Did you know that Canada is considering a change of mascots from the beaver to the racoon? Why? They always wear a mask.” They are also thinking of dropping hockey in favor of fencing. Guess why. Humor is very important, even if it is a little slapstick.

William Owens is an attorney and consultant at the Stafford Owens law firm in Plattsburgh. He served as a U.S. Representative for New York’s 21st Congressional District from 2009 – 2015.