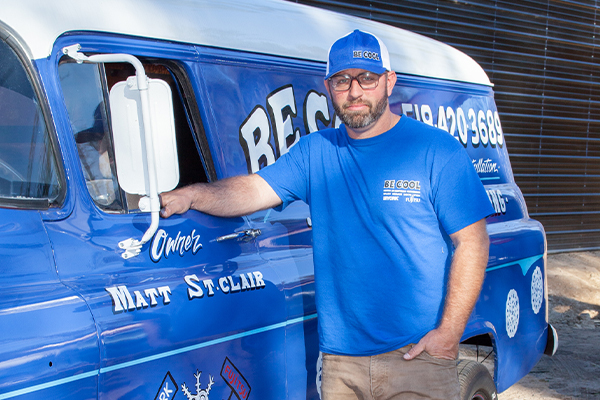 After working for a local HVAC company for 12 years, Matt St. Clair decided to go out on his own and open Be Cool Air Conditioning, LLC. At first it was just him, his truck and a single axle trailer. Now, after six years, the business has expanded to seven employees; two more will be added after the New Year. St. Clair is building a new shop and headquarters on Brand Hollow Road in the town of Peru that is expected to be completed by June 2023. “It’s busy,” he said, “Busy enough, that’s for sure.”

St. Clair made a name for himself based on his work ethic. When he graduated from college, he went to work in construction for Conroy & Conroy, then on to a decade with the HVAC company. Since he opened Be Cool, he has continued to live up to his solid reputation. He sees many repeat customers because he makes it known to clients that he doesn’t prioritize projects based on how much money the job will bring in or how much money the client has. “I tell everybody that Lake Placid money is no different than that from a single-wide in a trailer park. I treat everyone the same,” he emphasized.

Word gets around. St. Clair said he receives anywhere from 15 to 45 calls a day looking for help. He never knows who is on the other end of the phone or what kind of emergency they are experiencing, but he is adamant about not dropping jobs because a big client calls. He prioritizes his calls based on the level of urgency.

Be Cool also has the reputation of answering the call when you do have an emergency and taking the extra step to keep clients satisfied, which attracts a lot of repeat customers.

Satisfied customers often stop St. Clair when they see him out in the community to tell him about their positive experiences. “I don’t know how many times I’ve had people stop me in Wal-Mart, or Sam’s or Target and say, ‘I’m so happy that you have the group of guys you do. They took care of us and treated us with respect and treated our home as their own.” Being respectful is important to St. Clair. That is why his crew is known for their conduct. You will even find them taking off their shoes before coming inside to avoid tracking anything into a house.

His reputation has also helped St. Clair find employees during the workforce shortage. He is known for being a relaxed boss who is good to his employees. He is willing to go above and beyond to make them happy which also helps with employee retention.

Everyone is taken care of at Be Cool which has created a real community in the workplace. “We” is a big word around the shop and on the job. “We’re a team and they know that,” St. Clair explained. “There’s no ‘I’ around here; it’s always ‘We.’” He also takes pride in how his business has been able to expand to support his employees and their families — just one example of the family atmosphere he has created at Be Cool.

Another idea that has helped St. Clair recruit employees is by providing training. He is willing to train recruits and actually prefers employees who do not have much previous experience in case they learned the wrong way to do things. One of his current employees came on board with almost five years of experience in heating which has been a great asset to the company, but everyone else learned all they know on the job. This has allowed St. Clair to maintain quality control and ensure that employees know how to do things properly.

Be Cool struggled with supply chain issues during the pandemic like everyone else. The first year it was difficult to keep appointments because he had no idea when parts would arrive. Over the past two years he took the initiative and purchased several hundred pieces of equipment at the beginning of the season to make sure he had supplies on-hand. That decision paid off and things are running smoothly now.

If you have not heard about Be Cool by word of mouth, you might have seen their antique car in parades. Community involvement is one of St. Clair’s major priorities. He sponsors numerous youth sports team in the area and has coached. He sponsors Travis Bruno, a local racer at Airborne Speedway, who has won the track championship two years in a row. Be Cool also sponsored the Big Block-Small Block race at Airborne this summer which attracted cars from out of the area. He is looking forward to hosting the event again next year and hopes to expand it in the future.

Be Cool’s location is off the beaten track, down a long dirt driveway on the east end of Brand Hollow Road in Peru, so you probably have not had the opportunity to see its current operation. St. Clair’s plan for expansion includes a repair shop that will give him space to refurbish commercial coolers. He explained he can often repair something at a fifth the cost of a new piece of equipment, which provides more affordable options for many local businesses.

Matt St. Clair is creative, hard working and honest. Ask any of his customers and they will enthusiastically confirm that assessment.