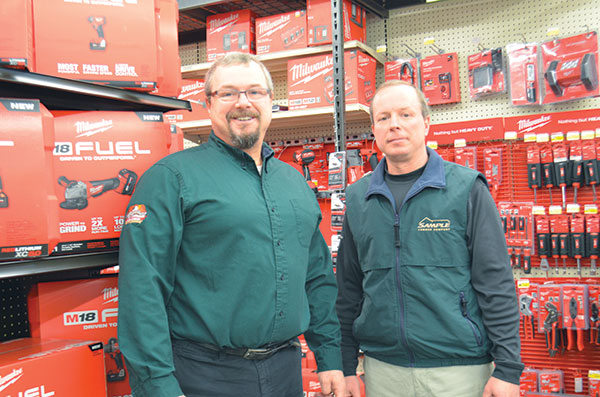 In 1989, 22-year-old contractor Steve Sample learned that his supplier, Douglas Duprey, was putting his construction supply business up for sale. With the energetic audacity of youth, Sample bought it.

Although he had plenty of construction experience and had been buying supplies at Duprey’s for years, Sample admitted he faced a steep learning curve. “It was a good challenge, and I thought it would be fun,” he disclosed. “I was young, had no debt, and ‘spoke Contractor.’”

Once he took over the business, Sample realized its rural geographical location in an area with a small population limited his growth. “I noticed that Duprey and other suppliers in this area dealt mostly with homeowners. No one was working with commercial contractors and developers,” said Sample. “I decided to expand into the commercial market.” Over time, Sample developed relationships with large contractors and real estate developers. He now estimates that those contractors and developers make up 85 percent of his business. “We’re known as the big-ticket discounter in Clinton and Franklin Counties. If there’s a major project going o such as the construction of the new University of Vermont Health Network building in Champlain or the SeaComm Federal Credit building in Plattsburgh we’ve probably supplied the materials.”

Sample had been in business only a few years when Sample Lumber had grown to a point where he needed a general manager. In 1991, Sample’s brother, Kevin, joined the business. The siblings had worked side-by-side on construction projects, so like his brother, Kevin had his own background in contracting. Kevin Sample was also only 22 when he entered the business. “We had a lot to learn, but had no fear, and were very aggressive at building the business,” he said. “It was definitely trial and error. Our biggest challenge at the time, due to our ages, was getting contractors to take us seriously.”

By advertising on local radio stations, attend- ing home shows, developing relationships with contractors and developers, and providing high-quality materials at competitive prices, the Sample brothers steadily expanded their business. In 2003, Steve purchased Dwyer’s, a lumberyard and hardware store on Depot Street in North Bangor, a business move that extended their brick and mortar presence into Franklin County. Currently employing more than 20 full-time employees, the Sample brothers are proud to have a direct financial impact on their communities. “We keep the labor local,” said Steve, “and get involved in various community fundraisers and activities.”

“It’s especially rewarding to sponsor kid’s sports teams. We enjoy seeing the tan and green Sample Lumber colors on the Mooers Elementary basketball and soccer players. We also sponsor Little League teams,” added Kevin. “We grew up here [in Cannon’s Corners] and are raising our families here [each brother has three children],” he said, “so we like to get involved and support their efforts.”

Like any successful, longstanding business, Sample Lumber has adjusted with the times. Originally doing their tax returns by hand, the company added computers in 1995. Not only were they able to automate their invoicing, inventory, bookkeeping, and other important financial records, over time the development of CAD (computer-aided design) software meant they had a better communication tool to use when discussing design plans with their customers. “It reduced the potential for miscommunication or misperception,” said Kevin. “Seeing the actual design on the computer screen—with the wall and flooring materials and finishes the customer is asking for—helps with estimating cost and ensuring they get exactly what they want. We can give better customer service, and, in the end, that’s what’s most important.”

Steve, Kevin, and their experienced staff credit the internet and the proliferation of home remodeling television shows for educating their customers. “People first browse the internet, and come in more prepared to discuss the details of a project,” said Steve. By all accounts, some “do-it-yourselfers” (now known as DIYs) visit Pinterest to explore images of the latest designs and materials, while others watch YouTube videos to get instructions on how to do building repair and construction.

In addition, the popularity of home design shows—such as Fixer Upper and Property Brothers on HGTV—has also enhanced how Steve and Kevin communicate with their customers. “I like these shows because they help customers develop a vocabulary and visual sense of what they want,” said Steve. “It eliminates discrepancies. Customers know what to ask for.”

Describing his management style as “structured and disciplined,” Kevin Sample sets clear expectations as general manager, but he also invites collaboration and ideas. “We have company meetings once a month,” said Kevin. “It’s where everyone can be heard, and things can be ‘reset.’ If a procedure needs to be adjusted, or if additional training is needed, we can address that and move forward.”

As Sample Lumber enters its third decade, Steve and Kevin Sample plan to keep developing relationships with commercial contractors, developers, and each home- owner who has a building project. They plan to continue offering the highest-quality building supplies at the most competitive prices. And to keep up with the constant com- petition from the online marketplace, they have plans for an improved web site, as well as offering their products via virtual (online) home shows.

That means Sample Lumber will continue to do what it does best: offer high-quality, well priced building materials for large construction projects, and personalized customer service to each homeowner.