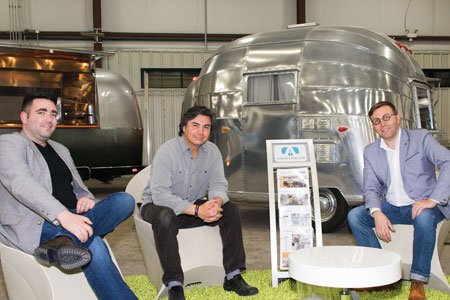 Einstein has been quoted as saying, “In the middle of difficulty, lies opportunity.” The owners of Nomad Airstream, a full service Airstream travel trailer customization and ser- vice company based in Plattsburgh, NY, can relate. The story of Nomad president Steven Clement and CEO Guillaume Langevin is one of small serendipities, enormous challenges and more recently, seemingly endless possibilities. From a chance meeting that brought the own- ers together in Montreal to a brief foray into running an Airstream dealership, the company is settling into a comfortable groove of doing what it does best, producing customized Airstream trailers for commercial and specialty use in its 35,000 square foot facility on Nomad Drive on the former Plattsburgh Air Force Base and sending them off into every corner of the world.

Co-founders Clement and Langevin make a rather unlikely pair of busi- ness partners: Clement’s energy and enthusiasm is a polar opposite to Langevin’s calm, pragmatic demeanor, but it works. Both are natives of Montreal. Clement brought his childhood love of the Airstream, an iconic symbol of luxury road travel, adventure and world class crafts- manship, and his experience in retail with Copenhagen-based luxury designer Carli Gry (now known as IC Group). Langevin took a circu- itous route to entrepreneurship, starting university in pre-med, segueing to Hotel Management, and later acquiring a degree in Business. After a Marketing internship at Cirque du Soleil, Langevin was hired to work in Cirque’s Montreal headquarters, in a cubicle on a floor with over 700 other employees. From there, he moved to a smaller marketing firm.

The two men joined forces in 2009, with a plan to purchase Airstream trailers, renovate, customize, and rent them out for corporate events in Montreal. A life threatening medical emergency with Clement almost prevented the partners from continuing their plans. When he regained his health the men went on to purchase the Plattsburgh-based com- pany, GSM Vehicles that had been renovating and repairing a small fleet of trailers. They moved the business from its original Florida Street location on the former Plattsburgh Air Force Base to its cur- rent residence in 2011.

People and the place

Customers come to Nomad with the desire to turn an already amazing work of craftsmanship into an even bigger dream, whether for personal or commercial use. Nomad’s job is to take Airstream vehicles which are recognized feats of engineering and design and modify them to their customers’ specifications without ever compromising the integ- rity of the original brand. “We have an amazing staff,” said Clement. “We are a team, a group of passionate individuals linked together. Our employees always go above and beyond what is expected.” Without prompting, employees covered a desk in Nomad’s front lobby with the signature riveted aluminum, echoing the exterior of the “silver bullets” undergoing transformation in the warehouse.

With an endless stream of inquiries and more work coming in, management has a strong incentive to give its hardworking employ- ees top priority. Nomad’s crew recently completed a project with an intense deadline and employees were noticeably worn out from being on their feet all day. Clement called a local esthetician, who came in at a moment’s notice and took care of each individual with personalized hand and foot massages. “It makes the team closer. It says, ‘We respect you.’” said Clement. The refrigerator is routinely stocked with healthy foods that the staff can help themselves to dur- ing lunches and breaks. “When you eat healthy you perform better,” said Clement. Staff and management share a large dining table for meals, a practice Clement retained from his days at Carly Gry, where the CEO and shop employees shared the same table.

Nomad’s group of A-list clients includes MGM Resorts International, specifically The Mirage in Las Vegas. With a continual need to knock the socks off its clientele, The Mirage plans to replace the former Cirque du Soleil-owned, Beatles-themed Revolution Lounge with a new concept restaurant called The Still. Dark wood and tufted leather banquettes recalling the classic whiskey bar will replace the psychedelic, fuchsia-lit interior of Revolution and one of Nomad’s Airstreams, custom modified into a food trailer, will hold center stage inside the 9,000 square foot lounge. Set to open in March of 2016, the installation of the food truck will take a well choreographed effort, including the removal of walls and massive chandeliers inside the casino. Tapas and other fare will be served from the Airstream, which will not be road worthy, but anchored in place for stability.

The company recently transformed a vintage 1969 Airstream Tradewind, named Planet Caravan, expanding it to a thirty foot food trailer, complete with griddle, salad bar, plate warmer, heat lamps, refrigeration, and outlet plugs that are 50 Hz, the frequency of elec- trical current in Europe and the Middle East, where many of their clients reside. The mobile restaurant they have created stands up to the California Retail Food Code, the highest standard in mobile food facility regulations in the U.S. Customized in Plattsburgh with inte- rior steel components fabricated in the North Country, it is headed via ship to Manama, the modern capital of the Persian Gulf island nation, Bahrain.

The explosion of wealth from banking and other industries in that region, combined with a lust for Americana of any sort makes the custom Airstreams that Nomad can supply a hot property. Word of mouth about the company’s work has spread in the region, and Nomad now has contracts with customers in Saudi Arabia, Kuwait, Abu Dhabi in the UAE and Qatar.

From Dream to Design

Transforming a unique piece of Americana into a custom dream on wheels is the stuff of reality show reveals. Plans are in the works for a possible cable TV series depicting Nomad’s process from initial client meeting and quote to the finished product. With a cast of char- acters in the ranks worthy of a reality show, including the owners, the show, if realized, will be highly entertaining.

Ed Marin, a consultant with a background in engineering and the aerospace industry is keeping the entrepreneurs’ feet on the ground. “We began with a business plan that recog- nizes that people retain Airstreams at a very high rate, and seventy percent of the original vehicles are still on the road. We want to be clear on where we fit in,” said Marin.

Growth in the food truck industry is a clear niche. Now restaurateurs can follow the crowd, rather than investing in a brick and mortar establishment. Specialty projects for corpo- rate branding are also growing. Many may have seen the #campaigncamper, a tricked out Airstream travelling the country, bearing the CNN and Facebook logos. AT&T ordered a customized Airstream to be used as an office at this year’s South by Southwest music festi- val in Austin, TX. It was there that Clement met “Stefani”, who went gaga over the AT&T Airstream. Clement and Stefani took a selfie in the unit, with Clement only later realizing he had just made an Airstream fan of Lady Gaga.

With each project highly customized, Marin hopes to find ways to standardize certain ele- ments of the construction process; however cutting off one whole side of the vehicle to create a door where none existed before does pose unique engineering challenges. It is nec- essary to do a detailed analysis of the frame design on many projects. Despite major struc- tural changes, the integrity of the vehicle must remain roadworthy and able to maintain a dynamic load. A mobile hair salon contract posed the problem of how to distribute the extra load of six hundred gallons of water for the shampoo station. Clement maintains a constant optimism. “Anytime there is a prob- lem, there is always a solution.” Successfully implemented, the client now wants two more.

Although many of the projects seem high tech, employees need to have conventional trade skills like plumbing and woodwork- ing to make them happen. The employees are part of a team and Nomad’s owners hope is to develop the staff to leadership positions. The staff vets new personnel, with everyone not just pulling their weight, but going above and beyond at all times.

Cutting corners is not an option. Marin will assist with the growing pains inherent in a company that does not currently have to fight for business, keeping a watchful eye on over- head and adding a second shift if necessary, rather than more space and equipment. “We will take on personnel to meet the demand.” Staff has doubled in recent weeks. Nomad’s new Creative Director, Andrea Knoll, will work to create a cohesive brand and image for the business going forward.

Clement’s fondness for the vehicles is evident. “Every Airstream has a story.” He spends his summers living in an Airstream on the lake and continually pinches himself in disbelief that business is flooding through Nomad’s doors. As its reputation for quality work and service grows, customers are calling from all over the world and each one will be treated like family. “We literally roll out the red carpet when someone comes to pick up their vehicle,” said Clement. The business is fun, exciting and changing and at Nomad Airstream, the adventure is just beginning.