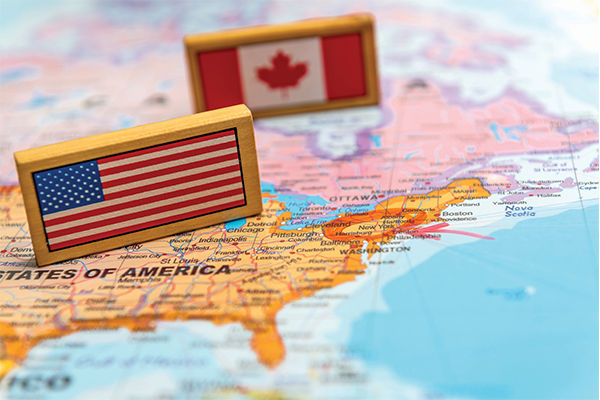 As we note so often, there is no greater driving force in the North Country economy and no greater source of our best economic opportunities for the future than the U.S.-Canada economic partnership.

For the first time in a generation, a serious cloud came over this crucial dynamic in the past year as the negotiations for an updated NAFTA , which we had hoped might lead to some positive advances in areas such as enhanced workforce mobility for bi-national operations, instead turned into a brand of negotiations we couldn’t have imagined, with tariffs and commentary holding the potential of doing serious bi-lateral damage.

Businesses and investors in both countries generally hoped and believed that all of the aggressive conduct would, in the end, prove to be tactical, with a generally positive outcome emerging which would sustain the most successful bi-national economic partnership in the world.

But make no mistake. There was a virtual freeze for almost a year on cross border investment in our region from Quebec, as companies understandably chose to hold back and wait to be sure all would be basically okay in the end. Calls and visits mostly dried up, and participation in longstanding programs designed to assist Quebec companies to grow in the U.S. went largely dormant. This in spite of a booming U.S. economy and growth in almost every Canadian operation already here.

We felt sure that once an agreement came, we would start to see a turnaround, and possibly even a boomlet linked to pent up interest and intentions. And we seem to have been right.

Within just days and weeks of the new USMCA (i.e. NAFTA 2.0) being announced, communications began to resume. The several- times-a-year “Succeeding in the U.S. Market” workshops we do for Quebec companies had struggled for months to draw sufficient interest, but now they are back on track. And our partners at the Quebec Chamber who suspended past co-sponsorship of a road show version of our seminars all around Quebec are now working with us to set up programs in the new year.

In our growing Transportation Equipment and Aerospace Cluster, we have recently conducted Red Carpet sessions for a few prospective Quebec companies, and active discussions are underway with others. On October 17th, we hosted a highly successful International Trade Day that drew a number of Quebec businesses exploring cross border processes. And at the end of November, we will host a first ever gathering of Quebec and New York transportation equipment companies in Plattsburgh for a major match making event, co-organized with Aero Montreal and the Quebec Ground Transportation Cluster.

Bottom line: Business is getting back to normal across our shared border, even as tariffs and some other disagreements continue.

During the long negotiation, we acquitted ourselves well as a Chamber and as a region, actively working with our Quebec and other Canadian partners in messaging and informational efforts on an international basis, and finding and taking every opportunity to help reassure our northern neighbors of our lasting friendship and of our solid commitment to our shared economic future. We stood with our friends and partners at a time when it really mattered to them and to us.

The months ahead hold new challenges. These include the need for Congressional approval of USMCA, which is by no means a foregone conclusion, with failure to do so potentially reviving notions of “terminating” NAFTA. In other words, rough seas could return next year.

But in the meantime, we are continuing to work day in and day out on broadening and deepening our area’s greatest economic asset.