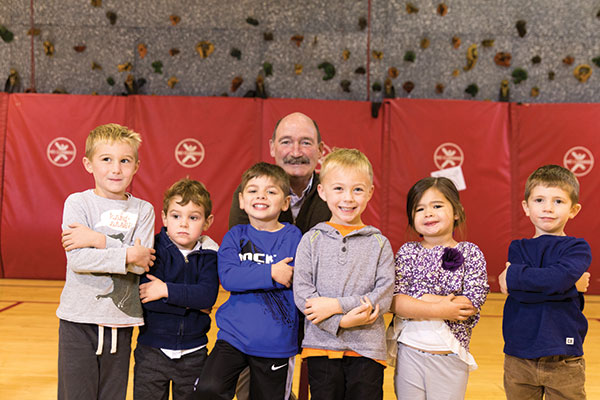 Mary Lou Rabideau-Bruno lost count after 90. She was loading a truck full of pumpkins for the Y’s annual Fall Festival on October 22. “It’s really pretty,” she said, helping me imagine 100 or more shiny orange pumpkins bobbing around in the blue pool. It’s just one of the many, many community events offered by the Plattsburgh Y. Since the nationwide rebranding in 2010, the 170-year-old institution now just goes by the one initial. Once upon a time, if you weren’t a young male Christian, you weren’t even allowed through the doors. Now, the Y serves all demographics, focusing on three core competencies: youth development, social responsibility and healthy living.

In terms of earned income, the Y is the largest charity in the country, operating as a 501(c)(3) charitable not-for-profit. Executive Director Kevin Killeen is proud to have grown the Plattsburgh Y from a $340,000 budget in 1990 to the $2.2 million budget he operates on today. With that, he has nearly quadrupled the employees working for him, which means more local folks are benefitting from the Y’s services.

Killeen learned the not-for-profit business model while working for various YMCAs in the Capital District early on in his career. He called it, bluntly, “the you-want-something-you-pay-for-it model.” He began as the program director at the Troy YMCA 31 years ago. From there he moved on to the Schenectady YMCA as associate executive director before being recruited to join the Plattsburgh YMCA. With a degree in physical education, Killeen said he “was one of those guys who wanted to be a physical education teacher, but a number of circumstances led me to this work and it’s just the luckiest thing that ever happened to me.”

Originally from Moriah, Killeen was reluctant to move back north at first. He took the Plattsburgh position under the assumption he would stay on for less than five years. Turns out, he got used to his mile-and- a-half commute to work every day, his kids ended up in great local schools and he quickly became a fixture as MC at the annual Chamber of Commerce Irishman of the Year breakfast. (Imagine my surprise when I sat down with him for this interview and realized the accent wasn’t real!)

Although he’s officially retired as of September 30, 2016, Killeen has agreed to stay on as interim CEO and executive director until the right candidate is found to fill the position. When asked if it is hard to let go, he said he had just found some peace, and he breathed a sigh of relief—the kind where your shoulders relax and you surrender your stress to the universe. “And then, I decided to stay,” he said, with a sort of growl. “I have never seen anyone else sit at my desk. No one else has ever sat in this particular desk in this particular office other than me.” He’s got a lot invested here.

“I’ve had the pleasure of running the business and doing good work that we can see every day. So it’s really pretty cool. It’s been a very gratifying way to make a living,” he said.

Unlike many not-for-profits, the Y does not rely on grants to stay in business year after year. The bulk of the organization’s revenue comes from fees for services and memberships, with help from United Way and Y USA, along with annual local fundraising campaigns. Rabideau-Bruno, marketing and membership director, said a large portion of program and membership fees goes back into the organization. “It’s the pure essence of a not-for-profit. Those that do donate to us or sponsor any of our events believe in our cause and that in itself is a wonderful thing to see happen.”

Rabideau-Bruno oversees the front desk, babysitting programs, marketing, fundraising, managing social media and the plattsburghymca. com website. She also thinks up ideas for new programs and implements them when it’s feasible. “She’s been a breath of fresh air,” said Killeen, noting the homeschool program that Rabideau-Bruno got up and running based on a model used at the Watertown Y. The program, in its second session, speaks to the demographic of homeschool families that are required to fulfill an hour of exercise or physical activity in the curriculum once a week. “We have nine kids now and we’re hop- ing it will grow,” said Rabideau-Bruno.

Christina Santor manages the Y’s school-age childcare program. The state-licensed program employs a staff of 20, providing before and after-school care for about 130 kids every day at seven different sites, including the three elementary schools in the city school (Bailey, Oak Street and Momot), as well as Cumberland Head Elementary and the Peru School District.

Youth development is a main area of focus at the Plattsburgh Y, where more than 3,000 people swipe their membership cards each month, but this doesn’t account for the tens of thousands of parents and children who utilize local Y services each year—like summer camp sessions at Camp Jericho, as well as sessions at the Plattsburgh campus. The Y organization looks to fill a need in every community they are located, and every community has different needs. For the Plattsburgh Y, an increase in families with two working parents over the last two decades pointed to an increased need for childcare. The Y went to local school districts to assess the need, and then partnered with them to fill it.

Bright Beginnings on Northern Avenue is the Y’s full-time infant-to- preschool childcare center. The early childhood program provides a creative curriculum that includes music, art, science, cooking and field trips. Once a week, pre-school children ages 3–5 get to take a bus ride across town to the Y’s main campus on Brinkerhoff Street for swim- ming lessons. A summer school program is offered for children 5–10 years old. Bright Beginnings works in concert with the Y’s mission to “focus on nurturing the potential of every child and teen.” For many children, Bright Beginnings is their first social experience away from home—precious moments that are positively shaped by the Y’s car- ing staff.

Peter Price, associate executive director, has been with the Plattsburgh Y for 22 years; 30 years total as a full-time Y employee. Like Killeen, Price has a degree in physical education. Years ago he identified a need for organized youth sports in the area. “I started three programs when I came here for 4-, 5-, 6- and 7-year-olds, because there wasn’t much offered for the younger age group in this area at the time.” Price had come from Philadelphia where the YMCAs offered robust youth sports programs. “So I thought we should try this and we got it going,” he said.

Like everyone at the Plattsburgh Y, Price wears many hats and oversees many aspects of the operation. At the time of our interview he was on his way out to make a deposit at the bank and getting ready to start the bud- get process for 2017. “Everybody does a little bit of everything,” he said. “Hopefully we’ll have some new ideas and we’ll continue to serve the community in the future,” he continued, echoing Killeen’s own vision for the Plattsburgh Y after he leaves his seat once and for all. “I think the most exciting part of the whole transition is to have a new person take a totally new look at everything we do. I was able to do that when I came in,” said Price. “I grew what I knew how to do, and I’m hoping the next person will find something new to let us grow into. That’s the exciting part for me, and it should be exciting for everybody involved.”