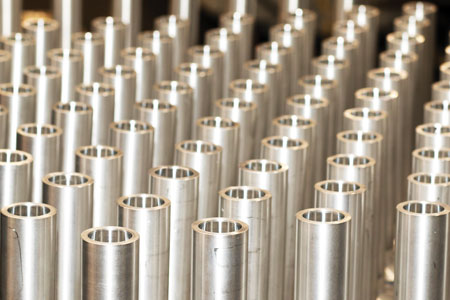 For over a hundred years, the tiny ham- let of Mineville, New York played a vital role in industry that reverberated outside its immediate region. Ore was discovered there in the early 1800s, and first the Witherbee- Sherman Company and later Republic Steel ran the mine there until it closed in 1971. Railroad and Lake Champlain barge routes were established and the town of Moriah, of which Mineville is a part, was integral to the iron industry.

Ore from Mineville, Moriah and Lyon Mountain was used to build the most widely- recognized suspension bridges in the United States including the George Washington, Golden Gate and the earlier hybrid suspen- sion Brooklyn Bridge. While it may maintain a much lower profile, Pre-Tech Precision Machining supplies custom components of critical use within the aerospace, defense, biomedical, and computer/electronic indus- tries from Mineville, putting the region on the map once again.

Founded in Williston, Vermont in 1984 by Rick Dolliver and Ed Paya (who has since retired), Pre-Tech opened its satellite manu- facturing facility in the Moriah Business Park in Mineville 17 years ago to increase capacity. The 22,000 square foot shop produces pre- cision components for several high level leaders in the aerospace and biotechnology industries. Production Manager Jim Kahler has been with Pre-Tech at the Mineville location since its inception in 1998. Kahler brought his experience in manufacturing from a factory environment to the team of six original employees. He was promoted to production manager in 2009 and has seen the location grow to thirty-two employees. Pre-Tech has made thousands of different custom components since it opened. “I learn something new every day,” said Kahler of the challenges inherent in manufacturing high precision parts.

The Pre-Tech facilities on opposite sides of Lake Champlain are mir- ror images of each other, which gives them the capability to mitigate their risk and maintain their demanding production schedules in the event of an unforeseen disaster. “Employees from Mineville are sent to Vermont to cross-train on similar machines and processes so that there are no hiccups,” said Kahler. He communicates daily with the company’s corporate headquarters in Williston to confirm production schedules.

In the world of precision manufacturing, patience is a virtue; the process is painstaking. Pre-Tech engineers work with a customer’s initial design, contributing their expertise to facilitate a prototype. Upon completion, the part is sent to the customer where it may be given the thumbs up with instructions to commence production. On occasion, the customer may decide the component needs re-engi- neering and possibly even a full scale return to the drawing board.

Once production begins on an order, Pre-Tech puts the part through its paces. For example, product may come in with rough edges, hav- ing been forged by an outside company from molds designed by Pre-Tech. In that case the parts are placed in a rock tumbler until they are smooth.

Next, the product might be shipped out to another outside service provider to receive a chemical process known as anodizing. These out- side processes can take time; one company that completes this stage is located outside of Springfield, MA. All outside service providers are routinely audited to ensure they are able to meet specifications and monitor defects and delivery data as well as comply with all per- tinent accreditation standards.
When a snowstorm in Boston last winter kept Pre-Tech’s plate sup- plier closed, the company didn’t skip a beat. It has more than one supplier in place for each process, thereby mitigating the risk of line disruptions. “What we do is only one piece of the puzzle,” said Kahler.

Last year, Pre-Tech purchased two state-of-the-art high-speed, thermally- stable horizontal machining centers, adding to its already robust arsenal of innovative equipment. The Okuma 5000 and 4000 provide thermal dynamic compensation. In layman’s terms, they equalize ambient tem- peratures so they compensate for the internal temperature of the shop. The contract on the machines provides training, service and mainte- nance, but the machines are also able to self-diagnose. The machine’s computer will shut down operation if a tool is broken or has reached its life use and notify staff by sending a text message, e-mail or even call- ing a designated phone number to inform them of its current position, eerily reminiscent of “HAL 9000” in the film “2001: A Space Odyssey”.

The new machines allow a level of mass production that human machining cannot meet. Components are placed on a horizontal attachment called a “tombstone”. Initial set-ups can be complicated and in-depth, however, once certified, the job is a snap to set-up going forward due to elaborate fixturing, set-up sheets and program validation procedures.

The tombstone is placed in the programmed machine and using the tools in its arsenal, many of which were created in house, the components are modified accordingly. “The 4000 can add on to a single load, so it is possi- ble to have six tombstones with eight parts on each in the machine. That is sixty-four parts that are machined without an operator ever touching them,” said Kahler. The 4000 can run a full tombstone in two hours and fifteen minutes on its existing product line. The goal is to operate the machines 24/7. Right now they turn on at five a.m. on Monday morn- ing and shut down on Saturday morning.

An ultrasonic cleanser removes foreign objects and debris from the threads in the machined parts. The machines are cleaned daily, more often if a different metal is used, as parts will lose their accuracy if the machines are dirty. Cleaning is done manually, by hand and with shop vacs. All metals that run off in the machining process are recycled including aluminum, stainless steel, brass, copper, and exotic steels. The shop fills one dumpster full of metal chips and shavings on average per day. Coolant used in the machining process, a water soluble oil-based product with the vis- cosity needed to keep the tools lubricated, is also drained for recycling and reuse.

The employees who work on the Burr Bench literally remove burrs and any sharp edges that would cut a wire placed in a housing. Parts are then measured for accuracy to specifica- tions with sophisticated tools including gauges measuring air volume, precision rulers and a ruby probe. The ruby tipped probe’s function is to probe certain surfaces of a part to allow the machine to locate itself in varying axes.

The ruby tipped probe can also be used for inspection inside a machine, so that if a part does not meet tolerance it can be rerun before removing it from the machine. If a measur- ing device is out of order, Kahler’s team can go “old school”, using more traditional mea- suring devices including a machine called the shadow, also known as an optical comparator.

With some skilled manufacturing compa- nies expressing dissatisfaction over the lack of skilled employees in the region, Pre-Tech has been successful in sustaining employment balance. They offer 100% on the job training for the right individual, but coming in with a good skill set from a variety of fields is key. Prior factory work, an ability to read blueprints, a background in construc- tion, and good hand-eye coordination from something like crocheting make for a good job candidate at Pre-Tech. “Some of these people can tear apart a four-wheeler and put it back together. If you can, I have a job for you,” emphasized Kahler.

Many of Pre-Tech’s employees are recent local Moriah Central School graduates. Most employees have a commute that is under fifteen minutes. “They never thought they would have the option to retire at a busi- ness in the town where they graduated high school,” said Kahler. With a goal of operating seven days a week, Kahler hopes he can find more qualified employees from the region. “Unfortunately, industrial arts classes do not offer much in the way of hands-on experience. Anyone skilled in basic machining, drilling, drafting, lathe work, or mechani- cal drawing will have a trade they can use anywhere in the world.”

Pre-Tech’s customers demand a 3-5% savings from one year to the next. That is where the company’s Continuous Improvement Plan comes into play. “Can we make it better? Can we reduce the production cost? We work hard to find the highest driver of expense and reduce it,” said Kahler. For instance, a component that used to be made in three parts is now made in one piece. With challenges like that, and new custom projects coming in all the time, job satisfac- tion is high at Pre-Tech. “You feel like you have accomplished something, that you are making a difference. You are making some- thing that is going to be used in everyday life,” Kahler concluded.