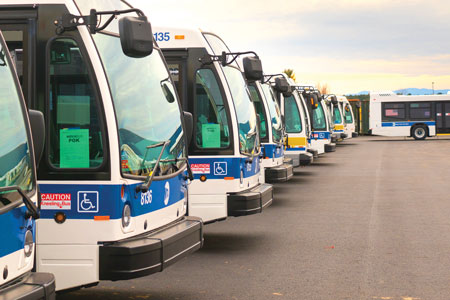 Niagara Frontier Transportation Authority just received its first compressed natural gas (CNG) bus to run in the city of Buffalo, a first for Buffalo and for Plattsburgh. That was the first CNG bus to roll off the line at the Nova Bus manufacturing facility on Banker Road.

Nova Bus, a subsidiary of Volvo Bus North America, supplies transit authorities across the country with buses powered by diesel engines, diesel-electric hybrid engines and now compressed natural gas. The company is even starting to make a full electric bus for the international market.

“The Volvo Group has strong environmental core values, but most transit authorities are look- ing for the most reliable and economical solution to their transportation needs,” explained Jason Martin, plant manager at Nova, when asked about the reason for the diversification of engine types. Nova recently produced its first all electric bus which is being tested in Montreal.

In addition to metro buses for some of the largest cities in the U.S. including New York City, another Volvo subsidiary, Prevost, produces commuter buses at the Nova facility. These are designed for longer routes and equipped with large luggage compartments underneath the coach.

All of the buses run through one assembly line at Nova with each station on the line build- ing to the individual specs of that vehicle. Then, they move to a separate finishing area based on the type of bus, finally being test driven around the streets of Plattsburgh.

“With 21 work stations and eight finishing stations, we have 30 buses going at once,” explained Martin. “We were producing two completed buses a day back in September. In October we went to three, and by January we will be producing four.”

“The Volvo Group has strong environmental core values, but most transit authorities are looking for the most reliable and economical solution to their transportation needs,” explained Jason Martin, plant manager at Nova, when asked about the reason for the diversication of engine types in their products.

In addition to doubling its production capacity, Nova plans to build a showroom adjacent to its existing facility. When customers come to the Plattsburgh facility to take delivery of their vehicles, they inspect the final product and initiate any final transactions. Then, the buses are driven to their location. The new showroom will house final delivery products.

Martin explained that the delivery miles are not a concern for transit authorities. “Customers are more concerned with reliability than miles. These vehicles are meant to run for up to 15 years, and the customers know they may rebuild the engine once or twice in that time period.”

Many of the transit authorities do the rebuilds themselves, but Nova provides them with training for that purpose. “Our buses have some advantages over the competitors’. They all include a full stainless steel structure and composite floor to resist corrosion from weather and road conditions,” added Martin who is relatively new to Nova Bus although he is a manufacturing veteran. Sixteen years of his career was spent with an international agricultural equipment manufacturer. Throughout his tenure there, Martin moved through five different facilities around the world.

Most recently, Martin moved his family from Burlington, Iowa to take the position with Nova Bus in Plattsburgh. “Most of the plants where I’ve worked were in small municipalities, so my family is very comfortable here in Plattsburgh,” he explained. “We like the access to the lake and mountains and the proximity to larger places for travel.”

The location of Nova Bus in Plattsburgh is convenient and comfort- able, as well. Martin cites proximity to Montreal, the birthplace of Nova, and New York City, the largest transit authority in the U.S., as important factors. He also mentioned the existing transportation industry in the Plattsburgh area, making it easier to coordinate the support services Nova needs.

The local workforce is another advantage Martin sees. “I’ve worked in five locations around the world, and this is one of the best work forces I’ve seen.” We see commitment, dedication, hard work, and good attitude. Employees are cooperative and engaged. When we have people with these traits, we can invest in the skills training necessary. We can teach them to build a bus.”