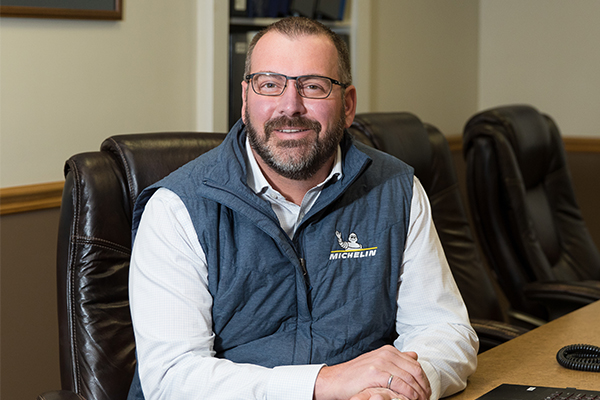 If you are one of the 1.2 million registered snowmobile owners in the U.S. it is likely the treads on your machine were made at the Michelin facility right here in Plattsburgh. With an 80,000 square foot facility and 230 full time employees, the plant is a key partner in the North Country’s growing transportation parts business cluster.

To learn more about Michelin’s local operation I met recently with Jason Davis, Industrial Director of Tracks and Systems for North America who is based in Plattsburgh. Originally from Potsdam, New York, Davis earned a Bachelor’s degree in Mechanical Engineering from SUNY Buffalo and spent more than two decades in manufacturing, sales and, research and development, and business management with Michelin’s local predecessors Camoplast and Camso.

Camoplast was formed in 1982 in Quebec when Normand Carpentier and Michel Lasalle purchased the divisions of Bombardier that specialized in snowmobile parts. In the following years they expanded their product line to include tracks and other parts for All-Terrain Vehicles (ATVs), construction and farm equipment.

In Sri Lanka in 1984, the company Solideal began manufacturing tires for forklifts. In 2010 the two companies merged and become a leader in off-road vehicle parts. Five years later Camoplast Solideal changed its name to Camso.

The vehicle industry and its associated parts sector are highly technical due to complex regulations and performance standards. Camso’s proximity to the U.S.-Canadian border gave it the ability to send experts back and forth. Those technicians worked with front-facing divisions such as sales as well as behind-the-scenes manufacturing allowing it to develop innovative products that made it an industry leader.

As Davis and I talked, it was clear that the consistent theme of his career has been off road vehicles including snowmobiles. “For more than 20 years I have been playing in the snow,” he explained with a hearty laugh. “We supply nearly 100 percent of snowmobile tracks in the world.”

Relying on its decades of experience with tracks for powersport vehicles, the local Michelin plant also produces skid steer tracks for construction and agricultural machines.

It is not just advanced technology that makes Michelin a leader in the transportation parts sector. The company also has partner relationships with its Original Equipment Manufacturers (OEM) that yield highly refined results. While other partnerships in the industry may simply involve an OEM providing performance specifications and a parts manufacturer building to meet those specs, Michelin works with an OEM to determine what the challenges will be, what standards it needs to meet and then manufactures a product to conform. The result is that Michelin leads in the off-road vehicle parts sector
with the most refined products possible from both the vehicle and product perspective.

One of the ways Michelin ensures standards are met is its use of Six Sigma methods that focus on improving performance by minimizing waste, errors and delays. Steps include defining, measuring, analyzing, improving, and controlling (DMAIC) the process to discover the source of potential problems. Changes in technology allow them to innovate even faster and their solutions have more value to their partners than before.

Forming and maintaining local partnerships is important to Michelin. It is a member of the North Country Chamber of Commerce; the company encourages employee involvement in the community and it understands that its Plattsburgh presence is not just important to its business logistics, but to the community as well.

The acquisition of Camso by Michelin has not changed the importance of strong local ties. Camso’s presence in Quebec will be maintained by Michelin, especially its management team. This is good news for the North Country as Michelin plans to expand into new markets for its rubber tracks such as conveyor belt systems. According to Davis Michelin is confident in that growth because of its unrivaled expertise in track parts that consistently meet the needs of their partners.

Asked about recent economic hurdles and labor conditions, Davis explained, “The challenges have caused us to think creatively for both recruiting and retaining employees.” In addition to traditional job fairs Michelin is using social media to promote the company. Once an employee is recruited, there are multiple career development paths and in house training available.

Despite the seasonal nature of many of its products, Michelin’s operation isn’t slowing down. Full production is ongoing year-round and plans to expand into new markets are moving forward making the company a welcome partner in the North Country’s growing transportation parts cluster.

OEMs Manufacturers are the companies that make parts used in the assembly of final goods that are then sold to consumers. A company like Michelin will make tracks for snowmobiles that will later be sold to companies like Polaris and Arctic Cat who will, in turn, assemble a complete snowmobile for retail sale. Given its expertise Michelin also sells replacement parts in the aftermarkets, an advantage that is not always the case for manufacturers.