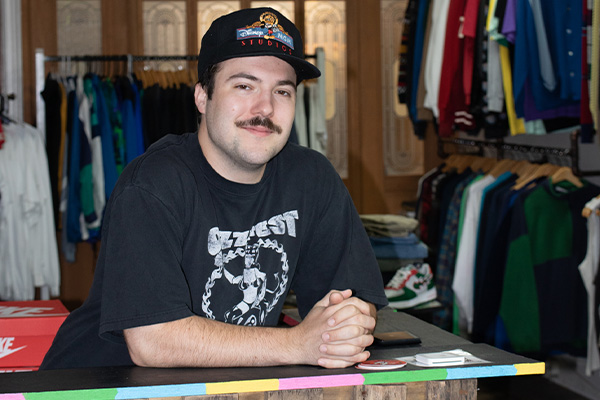 WE ARE WITNESSING A DEMOGRAPHIC SHIFT IN AMERICA. With an increasing number of young people spurning their hometowns for busier cities we are becoming more accustomed to the sight of vacant storefronts, a rising median age in our rural areas and a loss of vitality in what used to be bustling smaller towns. The North Country – even throughout the pandemic – has been impervious to some of these issues, but not all. As we head into a new era where record numbers of visitors are exploring the Adirondack Park and remote work has expanded the possibilities of where people can live, we find ourselves faced with a burning question. How do we leverage these opportunities to attract and retain new residents to the North Country?

Pieces of that puzzle are starting to fit together nicely in downtown Plattsburgh. This is evident in the new murals adorning what were previously stark facades, restaurants with busy outdoor seating areas and the number of new hops that opened downtown during the pandemic.

One such shop belongs to Michael Parent, Plattsburgh State alumnus and now owner of Plattsburgh Vintage, a unisex vintage clothing store located at 20 Brinkerhoff Street. When longtime tenant, Booth Insurance Agency closed, Parent was quick to step in and fill the space. ‘It was the next step in a natural progression,” he commented. “I recognized there was an opportunity to do something different downtown by opening a clothing store.”

Parent, who grew up in Chazy, had been selling vintage clothing online for years before making the decision to open a brick-and-mortar shop on Cornelia Street. When the downtown space became available, he made the move. “There was risk involved, but when I saw other business owners my age opening up stores downtown and the community’s support for those businesses, it made me optimistic.’

In February of 2021, the Northern Forest Center – in conjunction with the Common Ground Alliance – released a report titled “Attracting New Residents to the Adirondacks: A Strategy for the Adirondack Park and its Communities.” While the report points to the usual suspects – housing, jobs and access to highspeed internet as areas where the region should invest — it also highlights fewer tangible attractors – informal gathering places, welcoming networking groups and most importantly other young people already living in the area. In that sense Plattsburgh is experiencing a quiet renaissance. More young people are deciding to put down roots here with individuals like Michael Parent, who opened his shop at the age of 22, as a perfect example. By setting up shop in downtown Plattsburgh (and thus filling a space that could have sat vacant in a less fortunate town) he is signaling to his former Plattsburgh State classmates and other young people walking by that there is opportunity to be had here. That it’s worth it to plant a flag in Plattsburgh. “I think it boils down to, as a young person, realizing that you can make a career here,” Parent added.

“There is this sense of I’m not competing against anybody. Basically, let’s all help each other out,” Parent said about the businesses in town with similar concepts to his. As impressive as it is to open a business at such a young age, it’s clear that it took a ton of teamwork and community support to make Plattsburgh Vintage a success, “It was exciting to get to work with local people my age like Taylor Avonzato, who built out the inside of the shop, or Yard Sale Prints, who does the printing for Plattsburgh Vintage gear.” Quick to give credit to others, he motioned to a stack of authentic 80’s band t-shirts emblazoned with the likes of the Rolling Stones, Pink Floyd and The Smiths.

When I visited the shop, a Plattsburgh State professor had just brought in a stack of authentic memorabilia to sell to Parent and repurpose. “To be a part of what is going on down here and in this community is encouraging, exciting,” Parent added before diving into another stack of clothes that needed sorting.

In this way, Michael Parent’s story is a reflection of what makes Plattsburgh a distinctly great place to live. When he bet on himself and took a calculated risk to open a store, the community supported him. When he decided to move downtown, other local business owners rallied around him. And when the next young person decides to open a business in downtown Plattsburgh, they will be able to count on Michael Parent to reciprocate that support in kind.

While the population challenges facing Plattsburgh and the North Country are still real, our strength in community and how we include others continues to supply reason for optimism. The earlier question of how to attract and retain new residents will take business savvy and a progressive approach to answer, but the first step, which we can take on as locals and are invested in this area’s continued growth, is abundantly clear – be proactive in welcoming new people and ideas to our community and the rest will follow. “Plattsburgh, for me, it’s home,” Parent finished. May others, like him, follow suit.