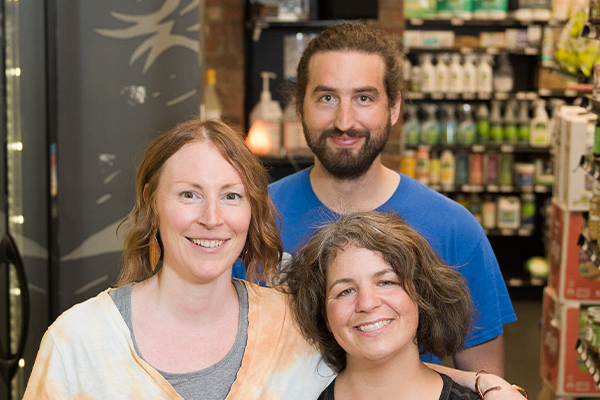 After its humble beginnings as a buying club on Carol Czaja’s back porch, the North Country Food Co-op is now 2,800 member-owners strong. Located on Bridge Street in downtown Plattsburgh, The Co-op, as it is called by its loyal members, is a community-owned grocery store that focuses on providing a place for the community to learn about healthy eating and living.

Rarely will you go into The Co-op and not see Ryan Demers, Kimberly LeClaire or Halie Sunwall busy helping customers. Demers, who replaced Czaja when she semi-retired in 2017, joined the staff in 2014 as a cashier, progressed to bookkeeper and eventually to manager. LeClaire is celebrating 20 years at The Co-op. Like Demers she moved up the ladder from a Saturday cashier to assistant manager and then Health and Beauty Department and Bulk Spice Department manager. The Co-op is a good fit with LeClaire’s other passion as a yoga instructor and operator of The Quarry Garden Farm where she grows the garlic that is sold at The Co-op.

Demers first hire, Sunwall, is the newest of the three managers at The Co-op. Starting in 2016, she is currently the produce manager. After working at a health food store in Syracuse, she had a dream of opening a smoothie and juice bar at The Co-op. While there were a lot of ups and downs getting The Smoothie Shack Out Back finally up and running, it became a reality this past June.

Unlike chain grocery stores, The Co-op does not have a playbook for the managers to follow. Instead, employees consider what the community needs in their decision making. They research products and decide what to stock instead of hearing pitches from vendors. They know about the product’s health benefits, if it is ethically sourced, recyclable, sustainable, and environmentally friendly. Just one of the many benefits of shopping small.

The Co-op is not a not-for-profit, but it operates like one. Profits are distributed to staff, member owners and reinvested in the store. Thanks to a $78,000 loan from member-owners, along with community grants and loans through New England Cooperative Funding, The Co-op was able to raise about $500,000 for renovations that took place over a ten-year period.

Today The Co-op is almost unrecognizable from its former self. The store is “bigger in all ways,” Demers said. From the bulk spice section, to the produce, almost every department has grown. The store increased in size as it expanded into the building next door at 21 Bridge Street. New coolers and freezers were added and the ceilings, floors and shelving were spruced up as well. It also updated its point of sales system which truly revolutionized the store. Computerizing its member database made it easier to shop at The Co-op.

Thanks to the investment, sales increased roughly 26% the first year after the major updates were completed, proving the effort was worthwhile. “Our changes would not have been possible without the help of the community,” Demers emphasized. He went on to explain, “The community did not just help pay for the renovations, many volunteers helped throughout the process. It was volunteers who took down the old shelving and replaced it with the new, washing everything in the process. Volunteers were the ones who set up the new bulk bins. They painted when asked and did all the manual labor that was required to expand and move into the new building. While describing the work of the volunteers, LeClaire talked fondly about how one of the main roles of The Co-op, “Working at a small store you believe in gives your own life purpose.”

How much of everything sold at The Co-op is locally sourced allows it to stand out when compared to its counterparts. Sunwall has been instrumental in securing vendor contracts with places like Juniper Hill Farm in Wadhams and Oregano Flats in Saranac. In total, about 25% of The Co-op’s sales are sourced within a 100-mile radius — an impressive accomplishment.

The Co-op’s 17 member staff – half of them full time — welcomes everyone in the community and strives to make healthy eating and living interactively less intimidating to those who are new to the concepts. “If you need to change your diet because you just found out you have a food allergy like a gluten intolerance, we are knowledgeable about exactly what foods are safe for you and which ones to avoid,” Sunwell offered. “We will also help you find foods that are enjoyable to eat and don’t taste like cardboard.”

Most of the employees have worked at The Co-op for years. Three of them have been there for 20 years or more. Unlike chain grocery stores, employees at The Co-op tend to stay because they care about the impact they have on people’s lives. Employees bonuses throughout the year, vacation and sick time that increases the longer you stay also help to encourage longevity.

It is understandable why people love The Co-op. Membership is not required to shop its wide selection of products, the cost of membership is low and volunteer hours are not required. Instead, members are incentivized with discounts.

The COVID-19 pandemic has served as a reminder of how important The Co-op is to the North Country community. While sales were down approximately one percent in 2020, this year they are up eight percent. “Our jobs became more meaningful during COVID,” LeClaire emphasized. “We understood people’s need for healthy foods and supplements and we met their needs.” The Co-op proves the importance of shopping small.