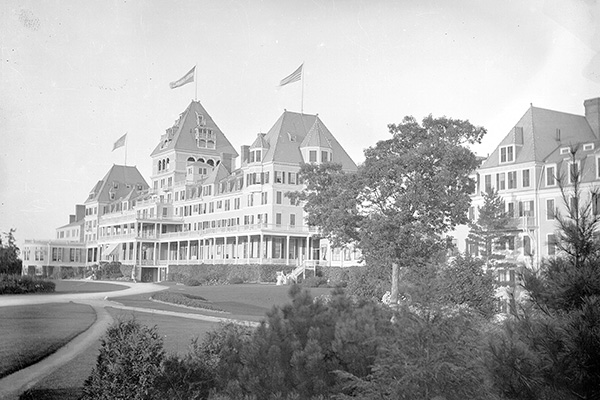 By Connie Mandeville | Photo courtesy of the Clinton County Museum

Hotel Champlain, one of the most luxurious resorts of its time in America, was built by the Delaware & Hudson Railroad in 1890 on a cape called Bluff Point on the west shore of Lake Champlain. (A cape is a pointed piece of land that sticks out into a body of water). It was five stories high, had 500 beautifully appointed rooms and was surrounded by 400 acres of manicured grounds. Travelers used the north-south route of the railroad between New York City and Montreal to reach the hotel and steamships transported guests from up and down the lake to its large dock.

The hotel was most recognized for its rich and famous guests. President William McKinley used it as his Summer White House in 1897 and 1899. President William Howard Taft visited in 1909 during the 300th anniversary celebration of Samuel de Champlain’s discovery of the lake. Members of America’s high society – the Astors, the Vanderbilts, William Randolph Hearst, and Charles Evans Hughes — were frequent guests.

One of the hotel’s most notable features was its golf course. The original course, which offered only three holes, was located near what is now the 16th hole. In 1899 the course was expanded to 18 holes under the guidance of well know golf course architect A.W. Tillinghast. Since much of the land surrounding the hotel was bedrock, topsoil had to be hauled in – not an easy job given the equipment of that time. Once the redesign was complete, sports writers described Bluff Point’s course as having “undulating greens and blind tee shots.” Other unique features of the course included five par 5 and five par 3 holes. Two of the par 5 holes, found at the end of the course, have challenged golfers for over a century.

Many famous golfers of the era found their way to Bluff Point’s course. Gene Sarazan and Walter Hagen, both World Golf Hall of Fame members, played an exhibition game at Bluff Point in 1924 and Craig Wood played the course after winning the U.S. Open in 1941. Famous women golfers also frequented the course, including Mrs. Richard Clemson in 1933 and Patty Berg and Helen Hicks Harb in 1941. One of the most famous visitors to Bluff Point was Babe Ruth who played in the 1936 Hotel Champlain Invitational. Legend has it he was bested by a local golfer from Keeseville.

In 1910 the hotel experienced a fire, but the owners were undaunted. They immediately moved to rebuild and were able to reopen the following year. Golfers were pleased that the course remained open throughout the reconstruction period. Today Bluff Point Golf Course enjoys the distinction of being the third oldest course in the country and the oldest resort golf course.

J. David Dame bought the Bluff Point Golf Course in 1991 and constructed cabins with full kitchens between the fourth and sixth fairways, offering an enjoyable place for golfer to stay and play. After managing and leasing the course for fifteen years, Dame’s son, Paul, purchased it in 2011 and began a series of improvements, including a fully automated irrigation system and refurbished sand traps. A flood that occurred during his first year of ownership required Paul to replace the break wall along the lake as well as shrubbery and the bunker at the fifth hole.

While the pandemic continues to pose unknowns for all small businesses, there is great hope for Bluff Point’s 2022 season. The open air and social distancing that come naturally with golf make it safer than other recreational activities and that bodes well for a comeback for golf all across the North Country in 2022.