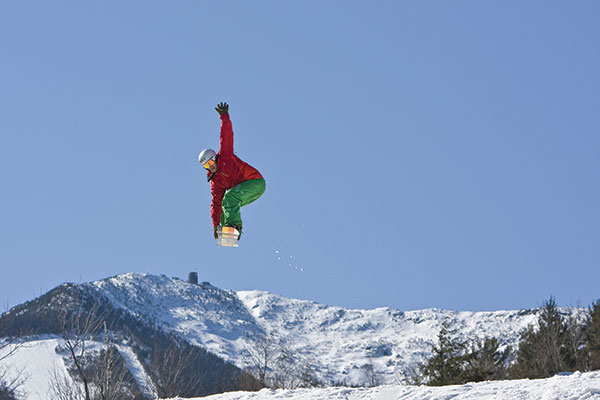 There were a few snowflakes in the air, along with some excitement, when Strictly Business talked with Ted Blazer a few days before Thanksgiving. One of the first big storms of the season had dropped 18 inches of fresh snow on Whiteface and Lake
Placid, and the president and CEO of the New York State Olympic Regional Development Authority (ORDA) and his team were getting ready to decide whether to open for the 2016– 17 winter season on that Thursday or Friday.

Sure enough, Whiteface opened on Thanksgiving Day, while Gore Mountain in North Creek and Belleayre Ski Resort in Highmount followed on Friday. “There’s a lot going on right now,” said Blazer. “All of our resorts have felt the new snow.”

In the week following, ORDA’s winter season moved into high gear even as temperatures rose—demonstrating why the Olympic Village at Lake Placid has come to be known as a role model among past Olympic sites. On December 1–3, the Olympic Sports Complex— home to the bobsled, luge and skeleton facility and the Mt. Van Hoevenberg Cross Country & Biathlon Center—hosted the 2016 Viessmann World Cup Luge Competition. That was followed by the 2016 World Cup Bobsled and Skeleton Competition on December 16 and 17. Both events were televised in the United States and Europe, giving viewers at home and abroad a glimpse of Lake Placid’s venues and attractions.

When Blazer says there’s always something going on, it’s an understatement. He emphasized that a key part of ORDA’s success has been to make sure that it can offer both participatory and spectator activities of all kinds. “Our visitors can come into Lake Placid and skate on the Oval or go to our museum, or go up to the Olympic Jumping Complex and go tubing, or take a bobsled ride or go cross-country skiing,” said Blazer. Or they can go to a World Cup. Where else do you have the opportunity to watch some of the best athletes in the world, including our own U.S. teams? “USA Luge makes its home right here in Lake Placid,” said Blazer.

Blazer said it’s always popular. “It brings back a lot of our fans’ favorites skaters—the topnotch performers people have enjoyed watching during the Olympics. And it’s always nice to host these skaters during the holidays—not only do people from around the area love to attend, but it also gives our guests something to enjoy in the evening while they’re here experiencing the beauty of this two-time Olympic village.”

Later, on January 7, the Center hosts what Blazer called “a nice pairing of hockey” with RPI versus Clarkson as a preview of the ECAC Championship Hockey Tournament taking place there March 17 and 18. In between, visitors will be able to catch the Harlem Globetrotters on February 22.

The New Year will also bring more competitive events to the Olympic region. January 13–14, World Cup Freestyle returns, with the moguls competition at Whiteface and Aerials at the Olympic Jumping Complex. March 4–11 some of the best young Nordic skiers from around the nation will compete in the 2017 Junior National Cross Country Championship at Mt. Van Hoevenberg Cross Country & Biathlon Center.

February 24–26, the popular Lake Placid Nordic Festival takes place, featuring the historic Lake Placid Loppet. Mt. Van Hoevenberg has been home to the race for the past 30 years. The slightly modified version of the 50km course constructed for the 1980 Winter Olympics makes it one of the most challenging citizen races in the world, as well as a qualifier for the American Birkebeiner. Blazer pointed out that the Festival also features 3K, 6.25K and 12.5K Citizens Challenge Races for cross country skiers of all levels, which makes it a great event for families.

“On top of all of that, we’ll also have any number of freestyle or snow board or free ride events at our ski areas up and down, from Whiteface to Belleayre, as well as a lot of New York Ski Education Foundation (NYSEF) events, including ski jump and cross country,” said Blazer. “So you wrap all those together with a lot of smaller events—ski races or hockey or speed skating or cross country—and it makes for a nice, busy winter.”

I asked Blazer if he’d ever dreamed he would be managing part of the nation’s Olympic legacy. He recently marked 20 years as ORDA president and CEO, but he’s also coming up on his 30-year anniversary with ORDA in a few months. “I came here in 1980 on an internship from the University of Colorado, and I was here through the first week of the 1980 Olympic Winter Games. I did a paper on the future use of the Olympic facilities, and interviewed a lot of people during the games period. I thought at one point I wanted to be part of that, so maybe there was a little bit of intuition way back then, but it just kind of seemed to just work out.” After earning his degree, he returned to the area, starting out as a ski coach and program director for the NYSEF, the moving up to assistant general manager of Whiteface and later, general manager, before taking the helm of ORDA.

He said that balancing the challenges of climate change and the upkeep of historic Olympic venues is a constant. “There are always challenges. But we always find a way to meet those challenges and provide a great product. “With climate, there are always ups and downs, but we’ve taken steps to be much more efficient with new products like energy efficient snow guns, which can make a snow product at temperatures that are a little bit higher, and are more cost effective and better for the environment,” he said. “We’ve also made strides with solar power, and Gore Mountain will be receiving the benefits from a large and unique off-site producer this winter. Whiteface is currently operating with 100 percent renewable power.”

“We’re also always investing in lift replacements, upgrades in snow making, making sure groom- ing equipment is in good shape, so that we can provide the best product possible.” He also pointed to the governor’s commitment to tourism and support from Empire State Development as integral to ORDA’s success. “Governor Cuomo has been able to identify ORDA as one of the economic engines here in the North Country,” said Blazer. “He realizes that we need to keep our venues vital and up-to-date because so many other businesses rely on our ability to attract people from NY and outside the area.”

And it’s clear that ORDA is doing that job well. Whiteface was ranked this year as the Number 2 ski resort in the eastern United States. “It’s not the first time,” said Blazer. “We’ve had some years when we’ve been number 1, and it’s something we’re very proud of.”

ORDA’s reputation is also well known among international sports federations and national sports governing bodies, making the former Olympic site a frequent host for international and national competitions like this year’s World Cups and the Junior National Championship. They bid for many of the competitions sometimes three and four years out. ORDA just recently learned that they’d won the honor of hosting Skate America over Thanksgiving weekend 2017. “This is one of the largest and most competitive skating events in the world,” Blazer said. “They’re held in Asia, Europe, Canada, and the U.S. every year, but this one will be particularly important because it will take place just before the 2018 Winter Olympics. You’ll see the top skaters in the world here, honing their skills, knowing that they’ll be going up against the same competitors they’ll face in South Korea.”

Blazer didn’t even have to think when asked what he liked best about his job. “It’s working with the staff—watching them do what they do so well, and being proud of that. That’s a great thing for me…knowing we’re providing a great experience for our visitors. We’re known as the role model of the past Olympic sites, because we’ve kept them vibrant, we’ve kept them sustained in such a way that they’re relevant…not only to sport, but to public usage and enjoyment.”