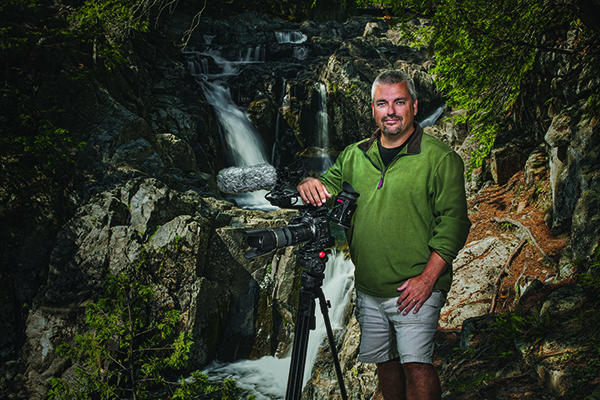 From his state-of-the-art studio in West Chazy, videographer Paul Frederick described how he came to specialize in television production—creating documentaries, corporate videos, commercials, and a YouTube series—and eventually form his own business, Paul Frederick Productions.

Raised in the hamlet, and still making his home there, Frederick’s career started in a documentary class he took at SUNY Plattsburgh in the late 1980s. His final project, a video of Altona Flat Rock (a series of reservoirs and small streams that was once the site of a hydroelectric project by William H. Miner), ignited his interest in local history and videography. Continuing his education, Frederick did an internship at Mountain Lake PBS while earning a BA in Mass Communication, and was hired upon graduation in 1990. During 11 years as a videographer and editor for PBS, Frederick learned all aspects of video production, inside and outside the studio including lighting, directing, and adding sound to film. Among his accomplishments are the films Song for Sisters, People Near Here, Voices of Scotland, and Reach for the Sky.

When the price of video equipment suddenly dropped and was easier to use, Frederick decided to start his own business. He admits it was a leap of faith. “I didn’t even have all the equipment at first. I used to borrow until I could afford to buy the equipment myself. I had a family to support, my son was only four years old at that time, but my wife backed my decision.”

What It Takes to Make a Film

Moving forward, the technological changes in video equipment and reduced budgets, meant that Frederick had to do a lot more to produce a polished film than record images with a video camera. Jobs that used to be done by multiple people, that he now does himself, include:

• Develop the concept with the client
• Write and edit a script (story)
• Recruit the actors, if needed, and oversee and advise on their clothing, hair and makeup
• Run the camera (images)
• Record the audio (sound)
• Light the subject
• Edit the video, including mix- ing the sound
• Compress the video (combine story, images, and sound) and deliver to the client

“I find the writing to be the most challenging,” disclosed Frederick. “I start with bullet points, and develop it from there. When writing, you have to remember the audience. They’re hearing the dialogue, not reading it. They can only hear it once; therefore, the writing must be at an easy-to-understand level, and be more like a speech—direct and straightforward. Some clients have scripts prepared, but those must usually be edited to have the maximum impact.”

In addition to superb videography skills, and solid experience, realistic planning of projects is crucial. “You must be able to fulfill what you say,” explained Frederick. “Keep your promises and overdeliver. My marketing plan is pretty simple. I treat every customer, large or small, with the same respect and care. I also stay current on the newest technology—which changes all the time—to make sure I can give the client the best quality possible.” (His most recent purchase is a 4K camera which provides 4x the HD resolution (ultra-clear) on a hand-held gimbal (a camera stabilizer that replaces the heavy SteadyCam). “Videography is what I’m most known for—making the pictures,” continued Frederick. “It’s fun to show people what you’re seeing, but if the production quality is not up to par, the film is ultimately unsatisfying.”

A Myriad of Projects, Including the Miner Documentary

Frederick makes corporate videos (for staff orientation and train- ing), commercials (Curtis Lumber is a longstanding client, and local TV viewers may have seen his recent commercials for Roto-Rooter and Pro-Care Hearing), and documentaries. Last year he created a music video set to “Best Day of My Life” by American Authors, for the SUNY Plattsburgh Admission Office to send in a welcome package to incoming first-year students. (Recruiting students and professors from over 30 locations on campus, the video pulsates with joyous depictions of the myriad of activities awaiting new students.) Other clients include ESPN (Frederick filmed the ESPN Outdoor Games in Lake Placid), A&E, Discover, and WMHT, the PBS affiliate in Albany. (He made Seneca Ray Stoddard: An American Original, Hudson River Journeys and Age Wise, a five-part series, as a freelancer.) His documentary, a co-production with Bruce Carlin, Divine Discontent: Charles Proteus Steinmetz, was nominated for a regional Emmy award in the New York City market.

Frederick is especially proud of his “longest work to date,” Heart’s Delight: The William H. Miner Story, a 90-minute documentary on the inventor, agricultural visionary and philanthropist. The video is the culmination of Frederick’s work on the subject. In 2003, he created the videos currently shown at the Heart’s Delight Farm Heritage Exhibit, and in 2008, he filmed the Miner Institute: 100 Years and Growing video to commemorate its centenary.

Work on this latest Miner documentary took over three years and blends pictures, sound and story to bring William Miner to life. Celebrating country life at the turn of the century, a time when many were leaving the farm to work in factories, Miner wanted to show that farming could be more scientific, more profitable and that country life is the most conducive to human happiness. To set the example, Miner built a model farm of over 300 structures on 15,000 acres and used a scientific approach to agriculture, embracing hydroelectric power and technological advances to run an enterprise that employed 800 people. To improve country life, Miner built Chazy Central Rural School, built Physicians Hospital (now part of the University of Vermont Health Network Champlain Valley Physicians Hospital, and constructed dams to provide electricity for it all. The film premiered at The Strand in August 2016 to a sold-out crowd. It was shown two more times at The Strand and now appears periodically in the Mountain Lake PBS evening line-up.

“Almost everyone in this area has a connection to William Miner,” shared Frederick. “The reception to the film has been very gratifying, and it has been great to hear every- one’s stories.”

Kirk Beattie, Vice-President of Administration and Finance at the William H. Miner Agricultural Research Institute (where the Heart’s Delight Farm and Heritage Exhibit is located), confirmed that Frederick’s documentary has had a significant impact. “Since the showings at The Strand and on PBS, we have definitely seen an increase in visitors, and more people are purchasing both the DVD and Joseph Burke’s biography on William Miner, The Man and the Myth,” he said.

Over the past year, Frederick has co-produced two documentaries with WMHT. Hamilton’s Albany focuses on Alexander Hamilton’s connection to Albany (Hamilton married Eliza Schuyler from the prominent Schuyler family in 1780 and practiced law in Albany) and Frederic Church’s Olana, a film about the dramatic rescue of the home of this Hudson River School painter. Possessing a minor in Art, and an oil painter himself, Frederick counts Church as one of his favorite artists. “I always liked his paintings because they were epic,” disclosed Frederick. “His canvases are bigger than life and his subject matter is very theatrical, almost like a movie. Overlooking the Catskills and the Hudson River, Church designed and decorated this Persian-inspired home, and the surrounding landscape, net- work of carriage roads and farm complex. Continuously occupied by the Church family until the 1960s, it was scheduled for demolition, but rescued by a group that wanted to preserve this national treasure.”

In the past five years, Frederick has co- produced with Tim Kramer a YouTube series, Plants Are Cool Too. Starring Chris Martine, a colleague from SUNY Plattsburgh and Botany Ph.D. Each 10-15-minute episode focuses on botanical subjects such as rare plants or projects to reintroduce plant species. “I recently returned from a trip to Pennsylvania where we searched for a plant that only grows on one specific cliff,” explained Frederick (They found it). “We also filmed a project in which a group is replanting trees in an old coal mining area and creating an ATV trail system.”

Running his own business, especially one with a studio in his home, has its challenges. “You’re never really off the clock. It’s hard to take time off. The studio is always here and you’re juggling everyone’s project,” said Frederick. In addition, videography equipment and software is so affordable, some people think they can do their own projects. Explained Frederick, “You can’t put a price on a skill set. If you want to get that polished look, you need to hire a professional. The one thing that never changes is telling a good story in an interesting and concise way while making the film exciting and watch- able. You have one chance to make a good impression.”

His favorite project? “The next one coming,” Frederick answered quickly. “Next, I hope to do a documentary on the history of Lake Placid. I love what I do. It’s like start- ing new every day.”