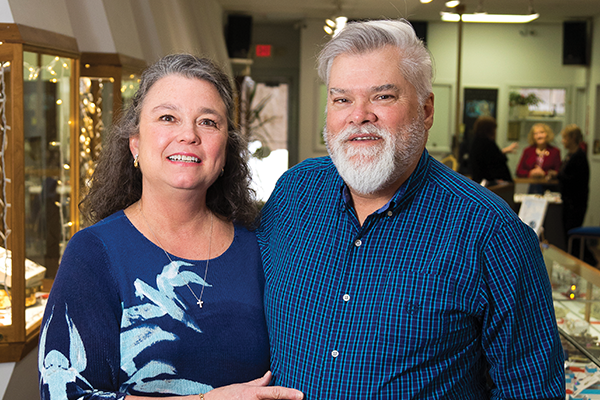 Payson & Stoughton Jewelers is a family owned and operated business that has served the North Country since 1933. The Payson family first entered the industry in 1933 when Charles Payson Sr. purchased the business from the Stoughton family. The senior Payson led the business for nearly 50 years, until his son bought him out in 1979. Ever since, Charles Jr. and his wife Shelley Payson have taken great pride in running the business.

Originally, Payson & Stoughton was located in downtown Plattsburgh on Durkee Street, growing alongside other downtown family businesses. “Business was different back then,” said Charles. “Downtown was thriving and there were only a few jewelry stores.” He referenced the years when downtown Plattsburgh used to be home to retail stores like Merkel’s Department Store, which closed in 1993.

In 1989, due to a changing retail scene downtown, Charles and Shelley Payson made the decision to move the business to its current location on Route 3. “People don’t window shop anymore,” said Payson. Similar to other “Mom & Pop” shops in the North Country during that time, the business had to identify a new way to remain accessible. By moving to Route 3, they were able to become much more visible to travelers and locals alike. Now, nearly 30 years later, the business still lives on at its Route 3 location.

REMAINING UNIQUE IN A COMPETITIVE INDUSTRY

The Paysons take pride in their business and their ability to provide great service to each of their customers. Shelley manages the books, updates displays, and takes care of buying new items, while Charles helps customers with all of their servicing needs. “I may be the only person who still services watches in town,” said Charles.

Staying up to date with modern technology and techniques has been important to the Paysons. Between learning how to use 3D printers and computer software in the business, as well as keeping up with the demands of their customers, the Paysons have plenty to keep them busy in such a competitive industry. “We have evolved with the times,” said Shelley. “Charles learned CAD/CAM and other technology for the business. It keeps me young,” said Charles, happily. “I’m always busy.”

The Paysons also have established valuable partnerships to maintain their competitive edge, which has helped them continue to learn and adapt in the business. Some examples include their association with Jewelers of America and certification by the Gemological Institute of America (GIA).

PLANS FOR THE FUTURE

It is evident that the Paysons put their heart and soul into their business, as well as pro- vide a top-notch experience for each of their customers. For them, continuing to run the business is a lifestyle they look forward to for many more years.

“We’ve been blessed,” said Shelley, reflecting on their years in the business and the wonderful customers they’ve had. “We’re centered around trust, experience, and respect,” said Shelley, and that is how they intend to move forward in the years to come. “I enjoy what I do and will continue to do what I do,” said Charles.

Moving forward, the Paysons may consider adjusting the business’s hours of operation to give them a bit more time to relax each week. For now, Charles and Shelley look forward to serving residents of the North Country as their present and future customers celebrate weddings, anniversaries, birthdays, and other milestone occasions.

Charles and Shelley Payson have been married for 40 years with 35 years in the business—another true “Mom & Pop” gem in the North Country.