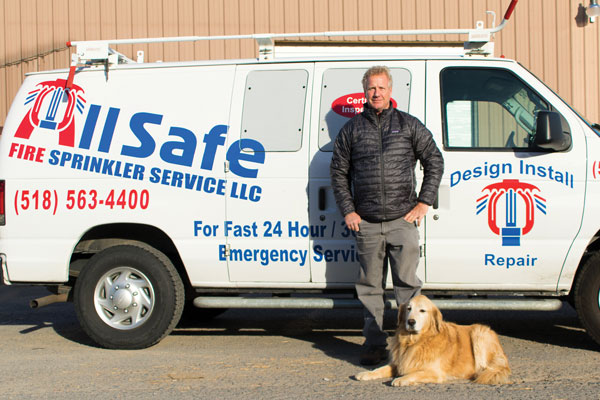 On a Saturday in July, Mary Anne Hawley left her store on Main Street in Lake Placid in the competent hands of her young employees to go home for a dinner break. When she returned a short time later, the building was on fire. In the end it was a total loss.

“The emergency systems we had in place worked perfectly. The two young girls working in the store that evening heard the alarm, listened for instructions and evacuated the building. The fire department was there in eight minutes,” explained Hawley. In business for 35 years, she always had an emergency plan.

Hawley describes emergency preparation as matter-of-factly as any daily task. “When an employee reaches the level where they gain a key to one of our stores, they are trained on what to do in case of emergency.”

The building next to the one that burned was protected by a sprinkler system serviced by All Safe Fire Sprinkler Service of Plattsburgh. “The fire came around the back and eventually entered the building through a window and door. Six sprinkler heads went off averaging 15 gallons of water per minute each,” Stephen Parker, director of operations for All Safe, described what happened as told to him by one of the tenants.

“A majority of the damage we sustained in our first-floor shop was from water, not fire,” Hawley explained and then went on to explain other factors that limited the damage. “Fortunately, our office was not in that building and our inventory and sales records are stored in the Cloud.”

Professionals in fire restoration and clean up know that the water dam- age is almost always more significant. “A quick clean-up response can help avoid secondary damage,” according to Pat Leary, owner of PM Leary Restoration. “The longer any material stays wet, the harder it is to salvage. Mold and bacteria start to develop and grow in 36 hours.”

Fire sprinkler systems are erroneously faulted by some for causing water damage. Actually, they use far less water than the fire depart- ment does to put out a fire. “When a fire starts in a sprinklered building, it is often extinguished before the fire department can get there,” Parker explained.

A plumber for sixteen years, Parker saw an apartment after a fatal fire and knew he wanted to get into the emergency safety business. “It scared the life out of me, and all I could think was what was it like to be in there and not be able to get out,” he confided.

Two years ago, Parker bought an existing sprinkler business and rebranded it. All Safe Fire Sprinklers installs and services fire sprin- kler systems from Ogdensburg to Plattsburgh to Port Henry with four employees. Some of his business is driven by changing building codes and some by a rising awareness.

“I’d like to have a greater impact on the residen- tial rental market, especially college housing,” Parker explained. “Young people just don’t think of being prepared for emergencies, but landlords should. Although the codes are becoming more stringent, we have a lot of older buildings that are grandfathered in. Even though it’s not required, they could be retrofit- ted with sprinkler systems to make them safer.”

People like Hawley, who have been through it, Parker, who helps people prepare every day, and Leary who sees the aftermath of disas- ter, know the importance of preparation. “In a recent inspection we discovered a sprinkler system would not have gone off in the event of a fire because it had not been properly main- tained, leaving a large business vulnerable to huge losses,” shared Parker.

While building codes might mandate the need for a sprinkler system, once it is installed, the owner is responsible for regular maintenance to keep the system in good working order. At a minimum, that means an annual inspec- tion, but the local municipalities do not always monitor this. Some insurance companies set standards for required sprinkler maintenance. New York State sets the standards for qualifi- cations of fire sprinkler inspectors.

“A lot of people think they have the right person doing the right job, like inspecting their sprin- kler systems, but you have to make sure people doing work for you are qualified and insured properly,” offered Leary. “A lot of people aren’t trained and insured to handle mold or work on a roof.” Leary pointed out that uncovered liabil- ities could prevent a business from recovering after a fire or other disaster.

“After an emergency, the biggest delay in get- ting businesses up and running is not knowing what to do, who to call,” he explained. “All busi- nesses should assemble an emergency response team to prepare for an emergency.”

When you are knee-deep in water in your con- ference room is not the time to shop around for a plumber. “Knowing who services your sprin- kler system and establishing a relationship with a restoration company in advance will help you get back up quickly,” Leary emphasized.

As Hawley’s situation demonstrates, and Parker’s and Leary’s professional experience supports, planning for an emergency can miti- gate losses. Hawley said, “Ours was one of only a few buildings on Main Street with an alarm system that rang directly to the fire depart- ment. I’m afraid if the fire had happened in another building, the outcome could have been much worse.”