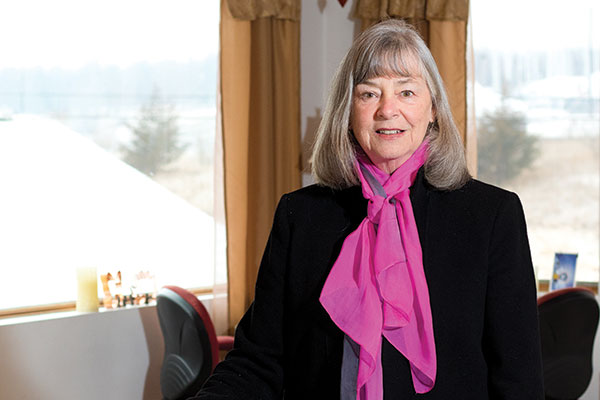 When Lindamarie Hill was pregnant with her daughter in the late ‘60s she experienced heart palpitations that led her on an alternative path seeking treatment in holistic practices like yoga, meditation and healing prayer. “People call it alternative, but it’s really ancient wisdom,” said Hill, now 71 years old and vibrant as a teenager.

Hill, whose formal training is in education, taught special education and life skills at AuSable Valley Middle High School from 1986-1999. In the classroom and on the field as a track coach she implemented guided visualization and positive thinking to help students maximize their abilities—back when those ideas weren’t exactly mainstream. Hill was truly a pioneer in that way of thinking in this region at the time, and it wasn’t always an accepted message.

Since leaving the traditional classroom nearly twenty years ago, Hill has established herself in this community, and many around the world (Switzerland, Belgium, France, Mexico, Iceland and the Middle East) as a Teacher of Spirituality and Healing. Her list of trainings and certificates goes on and on, only outpaced by her own writings. She is the author of more than 300 mind/body/spirit columns, three books and one CD entitled “The Self Divine.”

Hill’s business, Trinity Point Holistic Center, officially opened in 1998. Originally called Trinity Point Agape Center—agape means universal love—the business has seen ebbs and flows, but she has remained a constant learner, dedicated to expanding her knowledge of the world’s most ancient healing practices. The magical interconnectedness of the Internet now grants her, and everyone else, access to these ancient teachings that were once largely inaccessible to the average person.

Trinity Point has been host to many spiritual teachers from around the world. The Plattsburgh community has benefitted from being a part of a spiritual re-awakening and the teachings brought by these elders. “The wisdom of these teachers has enriched my own practice,” said Hill.

I had the pleasure of sitting down with Hill this January at Trinity Point situated in her home on Lake Champlain. She reflected warmly on her own spiritual journey over the years and how mainstream Plattsburgh has recently (finally!) come around to accepting and appreciating the healing arts of yoga, meditation, acupuncture, reiki, aromatherapy, and essential oils. “It’s really gratifying now because of all the yoga teachers we have in the area and people doing the kinds of things that I’m doing as well. It’s taken a long time in Plattsburgh. It’s been an uphill trek, but that’s okay.”

Our conversation called up names like Dr. Herbert Benson, the American medical doctor, cardiologist and founder of the Mind/ Body Medical Institute at Massachusetts General Hospital in Boston who, in the 1960s at Harvard, published research on the power of meditation. Hill noted, again, that while the teachings are ancient, they are still new to Western culture.

Hill began her journey into the practice of mindfulness through Psychologist Tara Brach almost twenty years ago, and has recently finished training in mindfulness; a movement adopted from Buddhist roots. The modern practice was popularized in the West by Jon Kabat-Zinn’s mindfulness-based stress reduction (MBSR) program. It is widely known to promote well-being and to alleviate a vast array of mental and physical conditions. Mindfulness is even used in business as a tool to optimize brain function and increase output.

Hill is a certified wellness coach and received her mindfulness train- ing with Saki Santorelli, Florence Meleo-Mayer and Jon Kabat-Zinn. Kabat-Zinn is a professor of Medicine Emeritus and creator of the Stress Reduction Clinic and the Center for Mindfulness in Medicine, Health Care, and Society at the University of Massachusetts Medical School.

An Inc. article titled “Why Mindfulness Is Good for Your Brain and Business” outlines study after study, from the Harvard Business Review to the University of British Columbia, proving the scientific benefits of the practice. Comparing mindfulness to other medita- tive techniques, Hill said, “Now the trend is mindfulness and it’s very powerful.”

Even though she is into her 70s, Hill envisions her practice continuing to thrive with no end in sight, especially with the openness of Plattsburgh to rediscovering the ancient wisdom of the ages. Her next undertaking will be to incorporate mindfulness programs into schools throughout the North Country, perhaps returning to where she first began her career. “I’ve seen it expand in many different directions and I’ve seen all the pieces come together. It’s a beautiful thing to be able to do and to offer,” she said.

Following the Hebrew tradition of honoring and blessing the new moon each month, Hill invites people from the local community and around the world to Trinity Point Holistic Center on Lake Champlain to join her in healing prayers and practices. “It’s just like planting seeds in the earth,” she said. “We’re planting the seeds of consciousness of what we want to achieve or accomplish throughout that month. It’s also about gratitude.”