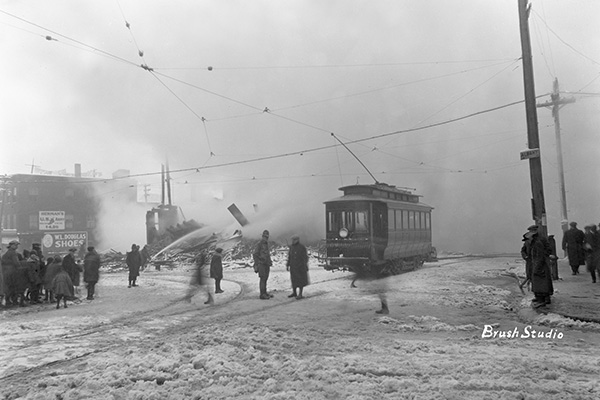 By Roger Black | Photo courtesy of the Clinton County Museum

In 1922, the City of Plattsburgh, with a population of just over 10,000, was entering the era of the roaring 20s with little sense of what was coming, but an awareness that things were different. World War I, then known as The Great War, had ended in 1919 and most of the soldiers who survived it had come home. The national economy was showing signs of growth, but there were concerning signs that discontent among workers in larger industries was reaching a boiling point. Long time labor leader Samuel Gompers was in the news often in 1922 when a workers strike threatened the nation’s coal supply.

In the North Country, paper mills were closing, in some cases and being bought up and consolidated in others, but overall, it was a time of optimism. Growth in the economy could be evidenced by new construction and new business openings. Discussions were on-going with the Federal Government to settle on a plan to build a proper monument to honor the hero of the 1814 Battle of Plattsburgh, Commodore Thomas MacDonough.

PROHIBITION
It was on another battle front that Plattsburgh found itself in 1922, the battle between smugglers and Customs agents.

The 18th amendment to the U.S. Constitution ushered in the period known as Prohibition and banned the manufacture, transportation and sale of intoxicating liquors. It was ratified by the states in 1919 and went into effect in 1920.

Located, as it was near the Canadian border and on the shore of Lake Champlain, Plattsburgh was on the front lines of the battle between smugglers of liquor out of Canada and law enforcement agencies on the backroads near the border and on the waters of the lake. Despite being looked back upon as a less than evil struggle between temperance and indulgence, it was, in fact, a truly brutal battle in the North Country. Shootings were common and the thugs doing the smuggling were often merciless with their victims. While there were certainly local residents who participated in the illegal enterprises, it must have seemed horrifying to many to witness the brutality of the conflict.

CADY CORNER FIRE
Cities often undergo major changes as a result of devastating fires. That was the case in downtown Plattsburgh on April 1, 1922 when it suffered its worst fire since 1866. Well-known buildings on the corner of Bridge and Margaret Streets were destroyed that Saturday night.

Known as Cady’s Corner, and later as Jacque’s Corner, the buildings housed M.P. Meyers and Company Inc. a hardware and auto accessories retail store, the W.B. Jaques Drug Company and the Jaques Capsule Company, Frank A. Finn’s Clothing Store and numerous other businesses. Damage was estimated at over $400,000 (equivalent to $6,452,000 today). Plattsburgh fire fighters were aided in their efforts by soldiers from Plattsburgh Barracks, for whom Plattsburgh Mayor Merritt Spear conveyed his thanks to Lt. Col. Nichols.

During the fire, the smoke was so thick in the downtown area that a trolley and a car collided because they couldn’t see each other.

Many of the businesses affected by the fire made hasty arrangements to relocate: Jaques bought Goldwater Pharmacy on Margaret Street and moved to that location and M.P. Meyers moved to temporary quarters on the second floor of 68 Margaret Street.

Less than two weeks after the buildings burned to the ground, First National Bank announced it was buying the corner property and would build a new, modern home there. Today the building houses Ashley Furniture.

ST. ARMAND’S BEACH
Relaxing on the beach was still a few years off for bathers at the City of Plattsburgh Municipal Beach, but in 1922 another beach was exploring possibilities. St. Armand’s Beach on Point au Roche, north of the city, advertised itself as the Grand Concourse with an ideal bathing beach that had a gradual receding sandy shore and shady maple trees. Admission was 25 cents and free entry for children under 14 who were accompanied by an adult. That entry fee included a dressing room for bathers, dancing, picnicking, and parking. The dancing pavilion and buffet could be reserved for private parties after 9 p.m. A private tent for dressing could be rented for $1 per day and $2 per day would get you a tent with a floor, cots and chairs.

Although the beach might have been considered a bit of a trip for residents of Plattsburgh, the ease of driving there on the state macadam road was proudly touted.

ENTERTAINMENT
Other, more formal manners of socializing could be found at the time, especially among the young. It was a continuing fashion for young women to attend balls at Plattsburgh Barracks where young officers might be charmed into a dance or two. The Catholic Summer School in Cliff Haven had numerous social events each summer that could be attended by a trolley ride.

A yearly celebration was the May Music Festival — a two-day event which featured the talents of young and old. The Plattsburgh Normal School provided an academic setting for lectures, even lending out its professors for talks to entertain and challenge the young and old at Plattsburgh’s new City Hall.

THE AUTOMOBILE
The ever-increasing popularity of the automobile and its importance to the economy was dawning on many business people. The notion of a community providing campgrounds for motor tourists was growing in popularity across the region. Aside from a place to camp, it was suggested by the Chamber of Commerce that the grounds could include stone fireplaces, water and other conveniences. Communities were encouraged to be welcoming to auto tourism and encourage the spread by good word of mouth, according to the Chamber. It was already evident to business people that being accommodating of auto tourists could offer extra business.

And there were numerous examples of the growth of the business of car sales in Plattsburgh and, indeed, across the country. It seemed like a new business selling cars in and around Plattsburgh was announced every month. They weren’t called dealerships yet and they often offered auto maintenance alongside new car sales, but in downtown Plattsburgh, as well as in various hamlets across Clinton County, they were sprouting up. In addition, the number of car manufacturers was still growing. The consolidation of manufacturers that eventually resulted in the Big Three — General Motors, Ford and Chrysler — hadn’t occurred yet and there were plenty of auto manufacturers to go around. But, alas, Plattsburgh’s own auto manufacturer, Lozier Motors, had relocated to the Detroit area some ten years prior and no longer called Plattsburgh home.

THE PLATTSBURGH IDEA
By 1922, the Plattsburgh Idea, as it came to be known, resulted in thousands of young men and businessmen coming to Plattsburgh Barracks for six weeks of training to become officers in the U.S. Army. (Plattsburgh Barracks was established by Congress as an Army base after the successful defeat of the British at the Battle of Plattsburgh in 1814.) The idea evolved into something close to the officer training program known today as Reserve Officer Training Corps. That year more than 400 college students who had enrolled in Reserve Officers Training Camp to win commissions in the Reserve Officers Training Corps upon graduation, were headed to Plattsburgh. They came from several universities in the Northeast including Cornell, Syracuse, Columbia, New York University, Rutgers University, and the City College of New York. The Camp Commander was Col. Jesse C. Nicholls, retired.

THE WIRELESS PHENOMENON
During the period broadcast radio was still in its infancy and Plattsburgh didn’t have its own radio station. In fact, the U.S. government hadn’t yet gotten around to regulating radio, so there were no licensed radio stations anywhere in the country, but radio stations existed. Widely touted as the first radio station in America, KDKA Radio of Pittsburgh broadcast the results of the Warren Harding vs. James Cox presidential election in 1920 before they could be printed in any newspaper. But that didn’t prevent people from speculating what the future held for this new invention. Wireless concerts? Sporting events? News and information? A whole world of possibilities could be imagined.

The residents of the City of Plattsburgh didn’t know what was yet to come during the remaining years of the 1920s. The economy was strong — there was no inkling of the economic depression that would arrive in late 1929. And while events in Europe were still in turmoil following the “War to End All Wars,” things had yet to turn ugly in Germany. There was a great deal of animosity towards Asians in the newspapers and in general, but Japan as an imperial conqueror was not foreseen in 1922. With automobiles and aero planes and the wireless, it must have seemed like a wondrous time with Plattsburgh having everything to look forward to.