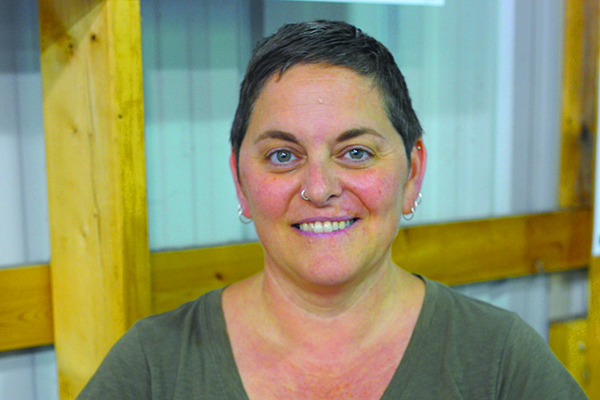 It’s a sunny Saturday morning and the sun is streaming down on the Burgh. On this par- ticular day, the unmistakable vocal stylings of Speedy Arnold add a lazy charm to the low buzz of adults and kids milling about, browsing and buying handmade food and crafts
from the Plattsburgh Farmers’ and Crafters’ Market’s nearly 30 vendors in the Durkee Street parking lot. The Saranac River flows by in the background, adding to the scene’s bucolic charm. With offerings as diverse as biscotti, specialty jerky, wood crafts, kitchen décor, jew- elry, honey and more, the market, now in its 29th year, is a hub of activity, a place to see and be seen, to support local growers, producers and crafters, and catch up with old friends and perhaps make some new ones. The opening of the market pavilion each spring, which at first glance resembles a train station, is eagerly awaited by North Country residents for it heralds a short, sweet season that only we can appreciate.

Jeff Mills and Pam Miller were in their mid-thirties when they met up with some other growers and producers, of which there were
few at the time, who saw the need to educate the local com-
munity on the benefits of locally grown and produced
food. This group included Bill Raus, Jerry Dygert,
a farmer from Keeseville, and Loretta Supernant,
a beekeeper at the Miner Institute. The fledgling
group had its first organizational meeting in an
all-purpose room at the Government Center where
they created a board of directors and the necessary
accompanying by-laws. From that initial meeting
the Adirondack Farmer’s Market, the precursor to
the Plattsburgh Farmers’ & Crafters’ Market, was born.
Mills credits Jane Desautel, owner of Underwood Herbs,
and Dick Crawford of Adirondack Bee Supply as being indispens-
able in the market’s early years. The market’s home, in its infancy, was at
Trinity Park in downtown Plattsburgh. “Back then we didn’t have tents,” said Mills. “We each had our own shade tree.”
Over time the market became a burgeoning cooperative that came to include not only Plattsburgh, but markets in Saranac Lake, Elizabethtown and Keene. Plattsburgh Mayor Clyde Rabideau’s administration provided the grant to build the pavilion that would house the vendors, moving them from Trinity Park to their current location on Durkee Street. As the cooperative grew, a group of the core original vendors headed by Dick Crawford and Pat Parker, spun off to form the Plattsburgh Farmers’ & Crafters’ Market.

Mills and Miller are now seasoned veterans of the market and they have seen the market, and their own business, an organic farm in West Chazy and another plot in Valcour, grow and change over the years. “The market has been really good for the community,” said Miller. “It has built a beautiful clientele. There is a waiting list to get in, and it is bringing people downtown and giving them choices. It’s a social outlet where people can talk and see old friends.” Pam now runs Black Sheep Gardens, a spinoff of Black Sheep Barn & Garden with her daughter, Leah McDaniel. They offer special events florals and organics, locally grown flowers in season.

There is a certain glamour involved in the story of peo- ple who leave behind a day job and come to the “country”, settle down and start a small agribusiness. Kimmy Rivera and her husband, Daniel, have all the characteristic roman- ticism attached to their artisan bakery at Triple Green Jade Farm. After many life transitions the Hudson Valley natives made their way to the Champlain Valley and an old, defunct farm in Willsboro, NY.
The couple originally began producing their breads at the Hub on the Hill, a kitchen cooperative in Essex, New York and The Village Meat Market and Bakery in Willsboro while working on bringing their own kitchen into exis- tence. Now “The Breadery”, as they refer to it, resides in a converted garage surrounded by haying fields, and turn- ing out all manner of artisan breads from a wood fired oven. While their hope is to someday grow some of the grains used in their products, they are currently more than happy to source their flour locally by supporting Champlain Valley Milling Corporation in Westport, the largest organic mill in the Northeast. Their whole grains and flours are used in the couple’s Pain Rustique, Triple Seed Whole Grain, Rosemary, Basil Garlic, and Cranberry Almond Breads, which make for great French Toast. Cranberries, nuts and seeds are sourced regularly from the North Country Food Co-Op. Kimmy is pleased to be a part of the Plattsburgh Market. By all accounts their first year as a market vendor is going well with regulars already lining up early for some of their favorite loaves.

As consumers gravitate toward using products that are free of GMOs (genetically modified organisms) and sodium lauryl sulfate (good for lather, bad for your skin), goat’s milk soap has become one of the hottest items on the arti- san craft scene. Capitalizing on the increasing demand for more natural ingredients, Shiloh Homestead has created a line of goat’s milk soaps scented with essential oils like lavender/lemongrass, cedarwood/patchouli and citrus. The epitome of what you would picture when you think of a cottage industry, owners Ramona Killam and her par- ents, Bob and Michele, actually raise the goat kids from whose milk they eventually make their soaps. The small business is a family affair, with Ramona’s four children also helping out around their hobby farm in West Chazy.

Shiloh Homestead’s product line ranges from the soaps to crocheted items to handmade cards with beautiful photog- raphy taken by Ramona’s husband, Rodney. Hand carved walking sticks and feed totes made of recyclable materials round out their offerings. The family is enjoying its first year as market vendors; their wares can also be found on Etsy. Ramona even has a YouTube video that gives step- by-step instructions for aspiring home soap makers.

According to market co-managers Pat Parker of Parker Family Maple Farm & Gifts and Bonnie Gonyo of Gonyo Vegetables & Jams, market regulations require that each vendor produce at least 50 percent of the items sold in their booths. Parker thinks this is actually beneficial to the vendors and the customers, giving the market a diverse product mix. Parker’s son produces maple syrup primarily from trees on his property in West Chazy, and market favorites like maple cream and maple candies are made at the Parker sugarhouse. “The 50 percent rule allows us to add other products to our table like maple vinaigrette, coffee and more,” said Parker. Gonyo has been making jam for years using New York State grown fruits and berries sourced from nearby Rulfs and Pray’s farms.

There was concern when Downtown Rising, a community effort that refers to itself as a “Food, Music & Art Festival”, decided it would transition from a Friday evening time slot to one identical to the Plattsburgh Farmers’ and Crafters’ Market’s Saturday hours of operation (9 a.m. to 2 p.m.) Some thought it might take away traffic, but the converse seems to be true. No longer holding down residency at Trinity Park, Downtown Rising is now firmly ensconced in its new home on the lawn at the Strand Center for the Arts and a path is now is being worn between the two events on any given

As the community speculates about the impact of the redevelopment of the Durkee Street parking lot through the Downtown Revitalization Initiative grant from Governor Cuomo, Mayor Colin Read had high praise for the market and its future. “The Farmers’ and Crafters’ Market is precisely the type of local content and color our urbanites love,” said Read. ”It will definitely be a part of our downtown revitalization. We need to create the critical mass for them to thrive, and we need them to create the attraction that can bring people down to our city each weekend. There are definitely ways we can help each other, by encouraging a greater cluster of interesting wares, and perhaps by opening Sunday to make the entire weekend downtown lively. I very much look forward to how the market can help the city and the city the market.”

With Wednesdays added to its schedule at the end of June, Parker confirmed that the market is flourishing. “We are at full capacity for vendors, and we have people calling all the time,” she said. “It is a wonderful place for businesses to get their name out to a bigger market.”