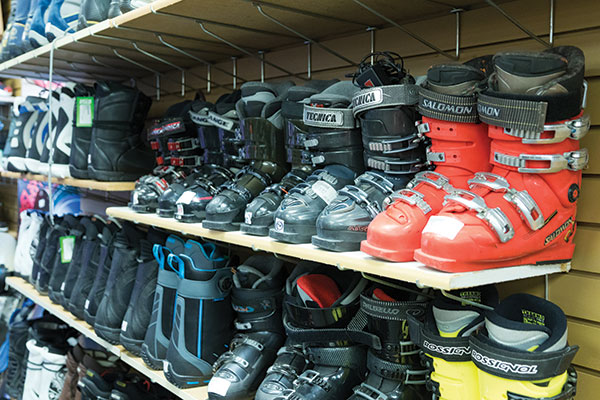 Ed and Jan Freer relocated to Plattsburgh in 1982. The reloca- tion was a result of a transfer from his employer at the time, Montgomery Ward. It was when Montgomery Ward left the area in the early ’90s that Jan Freer read about a franchise opportunity with Play It Again Sports. She remembers sitting in the orthodontist office with one of her children, reading a magazine and thinking this might be the opportunity for the family. It didn’t take much to get her spouse on board; with the combination of his retail experience and his pas- sion for sports, the advert seemed serendipitous. Thus began the first step in a journey towards a new career—this time for both Ed and Jan.

The Freer franchise opened its doors in 1993 and has been going strong ever since. The Play It Again Sports model is built on the concept of buy- ing, selling and trading quality used and new sports gear. Ed Freer loves to explain the barter system to young athletes who come into the shop. With a twinkle in his eye, he recalls the time, “…years ago, when we would paddle our canoe up to Canada and offer beaver pelts to trade for lacrosse sticks….” Then he chuckles and tells them, no, he isn’t quite that old. But essentially, he likes them to understand that the equipment they have outgrown is worth something towards the equipment they want.

Their customers are family, and families are their customers. Jan Freer loves watching the newest hockey enthusiasts get all geared up and see- ing them come back year after year, growing a little bigger each time. Play It Again Sports serves a wide swath of the North Country, from Malone to Tupper Lake, sometimes as far west as Massena. Sports gear is a market that a lot of retailers are trying to break into and why not? According to Statista.com, annual sales of sporting goods reached almost $65 billion in the U.S. in 2015.

The inventory split on used and new gear at Play It Again Sports is about 60/40. Whether your family as a whole is trying a new outdoor activity or you are supporting the current interest of the athlete in your life, Play It Again Sports prides itself on being able to “help everybody who plays.” Not only do they offer their customers a venue to make some money cleaning out their garage, or offset an equipment investment with some quality used gear, they also offer price matching on in-stock new items. And if you’re not entirely aware of what’s missing from your athlete’s gear bag, they offer gift cards. The Freers pride themselves on being a friendly neighborhood store and everything that means.

While they acknowledge they are a hockey store 365 days a year, they are more than equipped to outfit athletes in most every sport. Freer explains that his spouse is the resident figure skating fit expert. She can tell you which skate is best for your skater based on their ability and their goals, welcome guidance for most families. His deference to his wife in the fig- ure skating department involves a story, which features a younger version of himself as a figure skater. When he had progressed to performing lifts in the sport, he was dropped and couldn’t face figure skating any longer. The story is made all the more humorous—much to Freer’s delight— with his deadpan delivery and cherubic frame. He tells Dad jokes while Jan Freer speaks “Mom.” She can explain the difference between each of the brands that they sell, and contrary to what you might think, you won’t always be steered to the most expensive option.

Ed and Jan Freer have been married for 44 years and have worked together for 23 of them—putting up some impressive numbers in both arenas. It hasn’t all been smooth sailing. Ed Freer recalls how the ice storm of ’98 crippled their business. At a time when they planned to be busy in the store, the community was crippled. Those who did manage to get out weren’t buying hockey gear, but the Freers’ bills still needed to get paid. Thankfully, they weathered the storm. They balance that with the smiles they share when they talk about getting to meet Warren Spahn at “Meet the Athlete” events sponsored by the New York State Corrections Officers and Police Brotherhood Association.

Ed Freer’s passion for sports really becomes evident when he talks about some of the athletes they’ve met at conventions: Gordie Howe, Don Cherry and Broadway Joe Montana. “We’ve traveled all over the United States with the family and meet all these people…. It’s just incredible.” When I asked them about retiring, he replied, “Yeah, we probably have to do that at some point…but I’m in no rush. I have a good time coming here. This is fun.”

When I contacted the store to arrange a meeting I initially spoke with Ed. We made arrangements to meet and he made sure I knew that while Jan prefers to be behind the scenes, she would be present at the interview. “We’re Mom and Pop,” he said. “You can’t have Pop without Mom,” he added with a laugh. You could say that Play It Again Sports embraces the philosophy of most Moms. Share: When you share your toys, everybody enjoys more. Recycle: If you’re not going to use it, let’s give it to someone who will. And perhaps more recently, Shop Local: All of Ed and Jan’s used equipment is proudly harvested locally. Play It Again Sports is an asset to the business community and the Freers are an asset to the North Country.