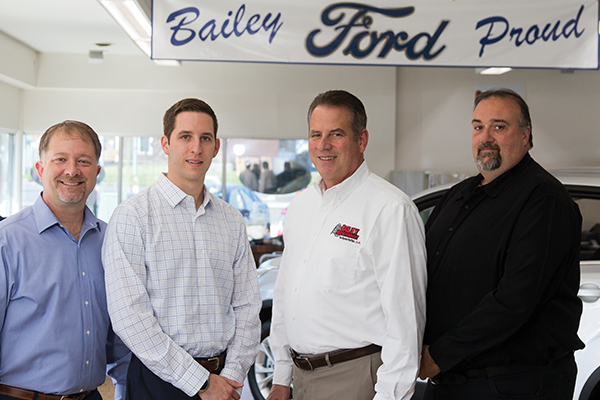 The Bailey Ford story began in the late 1930’s when a hard-working, community-focused mechanic named Albert Bailey Sr. found himself on the cusp on a grand opportunity. By 1942, just as the United States was joining the effort in WWII, Bailey Sr. was awarded a Ford franchise in Dannemora, New York and Bailey Motors was born.

According to Steve Bailey, the current president/owner of Bailey Ford, his grandfather received only six vehicles from Ford Motor Company his first year in business. At the time, few new cars were being manufactured for consumers. Most of the country’s resources were being leveraged to support the war effort. Because of that many auto dealerships were struggling to keep their doors open. Bailey Sr. stayed committed to his new business and used his mechanical skills to serve his community with his repair work.

For the next several years, Bailey Motors ran a steady business that focused on service and repairs, selling an average of 25-30 cars per year. In 1956, Bailey Sr.’s son, Lloyd, graduated from St. Michael’s College in Vermont and joined the family business. Over the next decade, Bailey Motors grew significantly, expanding sales to several hundred vehicles per year. While Bailey Motors was growing, the Ford Motor Company was also looking for ways to grow. In 1965, the Baileys took the opportunity to expand their franchise and opened a location in Malone, New York. The dealership consisted of a two bay garage and a small travel trailer. Ford officially awarded the Malone franchise to the Baileys in 1966 and Bailey Ford of Malone was born.

For the next several decades, Bailey Ford continued as a successful family business in the North Country, selling and servicing vehicles for customers from near and far.

After making it through the recent Great Recession, Bailey Ford was positioned to continue its growth.

The car business runs deep in the Bailey family. While Steve Bailey leads the business with years of experience with his father and grandfather, his son, Andrew, brings years of unique industry experience to the dealership. After graduating from SUNY Plattsburgh, Andrew Bailey worked for Dealer.com in Burlington, Vermont. Next he built a successful career working for the Ford Motor Company supporting dealerships all over Alabama and the Atlanta Metro area.

“While I was with Ford, I worked with close to 30 different dealers,” Andrew explained. Now working as the General Manager for the Malone location and supporting the team in its new Plattsburgh location, he is able to apply the best practices he learned from other dealerships. “I was drawn to the high performers and the ones embracing change,” Andrew said, reflecting on his experience with Ford Motor Company.

A CULTURE OF CUSTOMER SATISFACTION

“We’ve been fortunate to have a great group of employees,” Steve observed. The company’s move into the Plattsburgh market has allowed it to promote employees throughout the organization. Employees from all levels have been given more opportunities for growth,” he said.

“I realized years ago that you can’t have fully satisfied customers if you don’t have a fully satisfied staff,” Steve commented, referencing the company’s high employee retention. “Employee engagement is our secret sauce.”

According to Steve, the reason Bailey Ford has been able to do so well in a competitive landscape its their focus on people and finding solutions for customers. “It’s people taking care of people. My grandfather started his repair shop to help people.”

Currently the key question for auto dealers around the country — especially Ford dealers — is how to adapt to changes brought about by the electric car market. “The business is always evolving and changing,” Steve observed. “Within the next six months, the electrification strategy is going to play out for Ford dealers.”

Andrew explained, “Ford Motor Company has pivoted its organizational strategy to become a leader in the electric car market. It is really changing its angle. Rather than just selling trucks, they want to be a leader. It is likely that soon almost every Ford vehicle will have an electric powertrain option.

Rumor has it that Ford may come out with two new electric vehicles — a Ford F150 truck with an electric powertrain and a new SUV, which is expected to be a 100% electric high-performance vehicle modeled after the famous Ford Mustang. Only time will tell if the company actually decides to release those new vehicles to market.

For a business looking to remain competitive, the shift toward selling and servicing electric vehicles will come with some challenges. “It’s going to be a big investment to get these vehicles, retool the shop to work on them and purchase chargers,” said Andrew, but this challenge is part of what he loves most about working for the family business. “I like how we’re constantly being challenged in a changing industry,” he concluded.

A LOVE FOR THE CAR BIZ

The legacy of Bailey Ford began with Albert Bailey Sr. roughly 80 years ago. Four generations later, Bailey Ford continues to carry on his entrepreneurial spirit. “We’re rewriting how we do business — investing in new technology and always improving how we sell and service cars, Steve explained. “This is the best job in the world. We get to play with cars.”