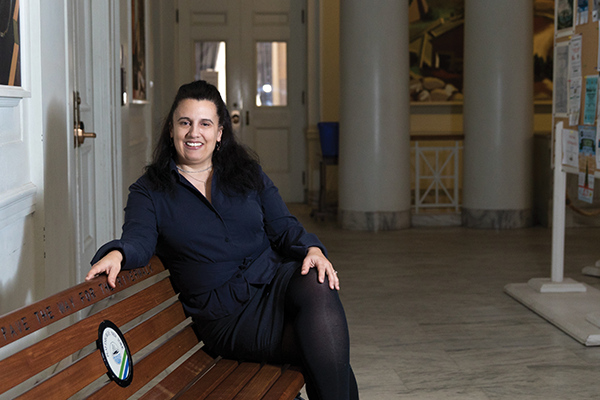 Annie Rochon is the founder and proprietor of TAR Translations right here in Plattsburgh New York. Born in Quebec, she spoke French at home and learned English at school. Rochon has always been enchanted by language and culture and everything that goes along with it. She received a Baccalaureate from Concordia University in Montreal and continued on to earn her Master’s degree in teaching from SUNY Plattsburgh.

Rochon works with corporations and local businesses alike. She explained, “As a translator/interpreter you have to master the target language. In my case, in most instances, the target is French. The skill of being invaluable and invisible is tougher to master. I am privy to a lot of different types of discussions but, as a professional, the best compliment I can receive is to be forgotten. I just play with words,” she shared with a differential laugh.

As a fan of puzzles, Rochon brings a sleuth mentality to her work. “I translate marketing materials, menus, operation manuals, and more. It’s always something different and I love it!” she said. To her being a translator/interpreter is more than just language fluency. There are expressions that we are familiar with as part of our everyday language and if simply input into a computer program, you can virtually guarantee something will be lost in translation. For example, if you ask a colleague if your presentation is cheesy, you aren’t asking if it is cheese-like, you are asking if it is unappealing or inauthentic. And, that is a horse of a different color, but a binary computer program would leave you in a “literal lurch” so to speak.

That is not to say technology doesn’t have its distinct advantages. Case in point: Imagine you were ill or injured. Worse yet, you couldn’t understand your provider or treatment plan. Rochon contracts with an agency to provide interpretation and translation for individuals who might find themselves in that circumstance. According to its website Go Transportation and Translation (Go T&T) provides onsite interpreting and document-based translation services in more than 200 languages. Go combines reliable technology with accomplished linguists who are experienced with the nuances of things like Workers’ Compensation claims. Their model ensures cultural accuracy while protecting the integrity of the message.

Rochon is an Assistant Professor of Classical and Modern Languages at Paul Smith’s College teaching French, Spanish and Latin American Studies. She is the only foreign language professor on campus.

She is enthusiastic about language and “getting it (the translation) just right!” She shared, “It is similar to detective work sometimes. I have over 300 dictionaries in my house and I use them regularly.” The books range from language references, to industry specific terms, to legal jargon, and cultural vernacular. Even with that many books at her fingertips Rochon doesn’t show any signs of limiting her collection.

Work that is different every day is what inspires Rochon. While she is in the college classroom a few days a week, she can also be found in a courtroom or jail. Both Franklin and Clinton Counties share a border with Quebec (the western border of Franklin County bridges into the province of Ontario). Both the United States Federal Court and New York State Court and their corresponding law enforcement agencies often need the services of an interpreter. “I’ve found you need to be patient and have the ability to remain calm and stay focused and resilient in those situations,” Rochon explained.

As for earning her living in all these different arenas Rochon wouldn’t have it any other way. “I meet a variety of people, learn about their culture and travel not only around the country but around the world,” she offered. Her membership in professional associations means she attends international conferences to enrich her cultural knowledge and her relationships, all of which she puts to work here in the North Country.

Annie Rochon is proud of her contributions to the area, and is fiercely proud of her multicultural upbringing in Montreal. She has seen an uptick in her private contracting of late and believes the current political climate has prompted citizens to ensure that paperwork in relation to their citizenship is indisputable. (Rochon embarked on her own journey and became a naturalized citizen of the United States in August of 2016.)

“I am proud to share my language and culture with others,” she offered. “I am a strong advocate for diversity. I ardently believe that languages, travels, cultures, and the beauty of cuisine will forever be intertwined. In order to learn about ourselves, we really need to learn about others. I get to do that every day, and that is why I love what I do.”