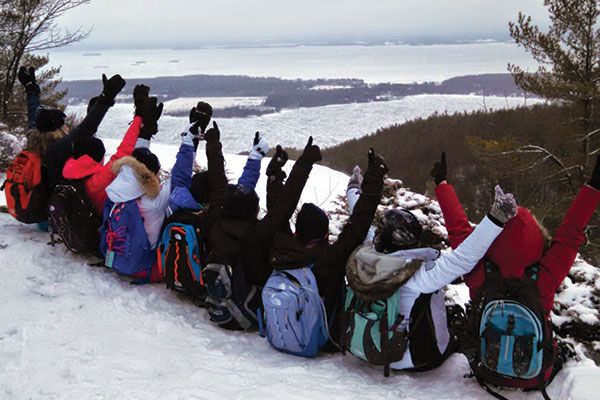 A Camp for all seasons.

When Strictly Business visited Pok-O-MacCready Camps and the Pok-O-MacCready Outdoor Education Center on a sunny, late fall day, it was quieter than what you’d hear at the height of summer, when—from June through August—some 260 campers aged 6 to 16 populate the traditional Adirondack camp.

Yet as I walked with Pok-O-MacCready executive director Brian DeGroat to the camp’s waterfront on the shores of Long Pond, we could hear laughter and shouts rising from the water. A group of sixth graders from Peru Central School were zigzagging in canoes across Long Pond with their staff guides, participating in a day-long adventure at the Pok-O-MacCready Outdoor Education Center (PMOEC). On the dock, two of the Peru faculty members who were snapping photos of the canoers pointed across the water to Bare Mountain, where occasional movement and distant chatter revealed another group of Peru students on a hike.

In the fall, when most Adirondack summer camps shutter their cabins, Pok-O-MacCready Camps and the Pok-O-MacCready Outdoor Education Center simply shift gears. During the school year, students in the elementary grades through college come from more than 50 schools all over the Northeast and Quebec to participate in the team building, natural science, living history, and wilderness adventure programming PMOEC offers. The camp’s newest facility—The Crux: Champlain Valley Climbing Center—is now open to the pub- lic year-round. And throughout the fall, winter and spring, PMOEC opens its conference center to North Country businesses and organizations for team building retreats and conferences, offering heated cabins during the colder months and lakeside cabins for participants during more temperate times of the year. Midwinter, PMOEC also offers popular, week-long Winter Break and Spring Break Day Camps.

Dr. Charles Robinson, a Peekskill Military Academy teacher, pur- chased the land surrounding Long Pond in Willsboro in 1904. He returned the following summer with his academy students to start Camp Pok-O-Moonshine, the original camp for boys that established the traditional summer Adirondack camp experience that continues at Pok-O-MacCready to this day. Over the years, the camp expanded, and in 1967, Jack Swan, Robinson’s grandson and the current owner of the camp, created Camp MacCready for girls just up the hill from Camp Pok-O-Moonshine. In the 1970s, the two camps merged and combined names to become a single co-educational camp named Pok-O-MacCready. By 1974, the Swan family established the Pok- O-MacCready Outdoor Education Center.

I asked Brian DeGroat if creating the Outdoor Education Center was a strategic business decision to make use of the camp’s educational and residential facilities year-round. He admitted that while it might have been a small factor, the primary reason was simply based on the Robinson/Swan family’s enthusiasm for, and commitment to, the outdoor learning experiences that Pok-O-MacCready provides.

There’s something about putting kids—and adults—into the outdoor learning environment that opens them up to opportunities. DeGroat has a degree in secondary education and history, and initially taught social studies in New Jersey. “I found out pretty early on that after my own education and a year of teaching, I’d spent enough time in the classroom,” he said. After some backpacking in other parts of the world, he heard about an opening at Pok-O-MacCready in 2008. “The opportunity to educate kids in a non- traditional, outdoor setting sounded pretty appealing.”

DeGroat says the experiences Pok-O- MacCready offers are nature and adventure based. The retreats the PMOEC offers for area businesses feature team building components, as well as an opportunity for participants to get outside and breathe. “Employee wellness is really important to some of the businesses that hold retreats here, so we make time for participants to get out and hike or climb or cross-country ski—in addition to the guided team building activities that we offer,” DeGroat said.

Exploration is an important element to the experience of younger visitors to Pok-O- MacCready Camps, too. Summer campers can choose from an array of traditional and water sports, horseback riding, living history classes, Native American history, art activities, and wilderness programing like mountain biking, hiking, climbing, outdoor survival skills and camping during their weeks at camp. There are also rotating weekday “club” days with different themes to give kids new things to try out each week and progress to different levels of mastery. Campers have started out earning a Pok-O- Patch for hiking the four mountains near camp (Rattlesnake, Bare, Sugarloaf, and Poke-O-Moonshine) to earning their 46er badge several summers later in their teen years. Evening and weekend activities include all-camp events.

“There’s a large degree of removing the outside world—phones, screens, parents,” said DeGroat. “When kids are here for three, four weeks at a time, they’re building really strong relationships that they want to come back to summer after summer. Each of them has a chance to become their own person. There are no expectations and they can be who they really want to be.”

Like summer campers, student groups that visit the PMOEC during the school year get to choose several activities to participate in during their experience at the camps, in addition to team building activities that they all take part in. Many, like the Peru Central School District, bring the same age group each year, making it a special event that younger students look forward to. The Mayfield school district, for example, brings fifth graders every year, giving the students a cap- stone to their elementary experience.

At PMOEC’s ropes course, a girl leading a blindfolded classmate across a rope-suspended plank known as “Pirate’s Crossing” called out, “Let go! I got you!” Her other classmates chimed in with instructions and encouragement, while parents and chaperones spotted them from either side of the plank.

Just yards away, another group stood in the center of a rope strung around four trees. They had to figure out—together—how to move outside the enclosure without touching the rope or climbing under it. Their only tools were their brains, their bodies, and a board. Chatter began immediately, with several kids offering theories, others narrating the pro- cess. DeGroat said that with the kids, you often observe multiple leaders leading loudly at the same time. One of the Peru teachers shared that these team building exercises can be hilarious…and painful—because the adults are not allowed to say a word.

In the end, she said, “the experience is remarkable. What’s most amazing, is to see non-leaders emerge as leaders in a way that would never happen in the classroom.”

And that is exactly at the heart of the essential Pok-O-MacCready experience. 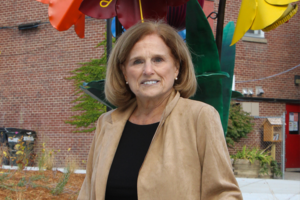