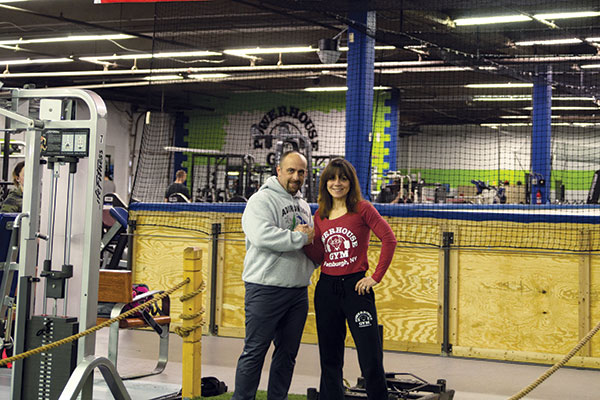 I got a little winded just listening to Michelle Mosher list her impressive credentials and extensive experience in the health and fitness industry. Her formal education is in nutrition and she has been a certified personal trainer and fitness instructor for over 20 years. She is a certified instructor in Pilates and Spinning. She is a certified Biggest Loser Pro. And she has worked as a nutrition educator with Cornell Cooperative Extension and the American Heart Association Go Red campaign.
I took a deep breath and turned to her husband and business partner, Keith Provost, ready for his list.

“I’m just a pro bodybuilder,” he said quietly. Just a pro bodybuilder? Nuh uh. “He’s got like 30 trophies in storage,” Mosher shared. (She has at least a dozen.) Provost is a retired correction officer, a talented photographer, a supplement expert, an entrepreneur. And a dreamer.

The Adirondack Coast Athletic Complex has been their dream for some time. Last year, with financial backing from Provost’s parents and support from local real estate and business owner Joe Akey, the 33,000-square-foot facility opened for business.
There is still work to be done to complete the renovation of the Latour Ave. warehouse space (Provost and Mosher have done much of the work themselves), but the facility is fully operational with 600 members enjoying all the sweaty, muscly glory of a bona fide Powerhouse Gym.

It looks like a gym. Metal on metal for miles, complete with nearly 100 pieces of selectorized (Nautilus style) workout equipment, 16,000 beefy pounds of free weights, a boxing ring, a functional training area and a private power lifting room. A childcare center, shake bar, supplement and athletic wear store, batting cages and 100-by-50-foot turf arena round out the massive space.

It sounds like a gym. Loud pump-you-up jams barely drown out the thud of free weights released from triumphant lifts. The clang of exercise machines resisting human force screams out in pure exertion. Grunts of seriously strong men and women at work let soft-bodied passersby like myself know they mean business.

Mosher and Provost’s vision has burst to life like the seams on a bodybuilder’s too-tight tank top.

Provost admitted that his wide array of skills is mostly self taught, that he learns through reading and observing. His passion for weight lifting and bodybuilding started in the ’80s in Caruso Gym in Montreal—the same gym where legendary bodybuilder and entrepreneur Joe Weider hung out. Weider co-founded the International Federation of BodyBuilders, created the Mr. and Ms. Olympia contests, published industry magazines like Shape and Men’s Fitness and manufactured fitness equipment and supplements.
Now Provost intends to impart his own knowledge of the industry to younger members of the gym, eventually creating a culture of fitness and high caliber athleticism here in the North Country.

While traveling with and photographing his son’s Plattsburgh Football Club (PFC) team, Provost noticed something interesting through the lens of his camera. He shoots with a high speed Sony A99 full frame camera, taking approximately 10 to 12 pictures per second. The high frame rate photography allows him to choose the best images from the sequence, and it gives him a detailed look at action shots—revealing the proper or improper form an athlete uses to kick a soccer ball. Like a dedicated coach studying game tapes, Provost began seeing why his son’s team was getting beat on the field.

“We have really good athletes here, and good coaching, but when we go to the bigger markets, I started to see through the lens of a camera that the kids were just being beaten physically,” he said.

His idea to create a training complex was two-fold: 1) He wanted to give local kids an opportunity to train in a high- quality facility with strength, conditioning and injury prevention incorporated with field time and technical coach- ing so they can compete at higher levels and in bigger markets. 2) He also wanted to bring tournaments to this region, and with them, hundreds of traveling sports families who will drop thousands of dollars at local hotels, restaurants and shops on any given weekend.

It’s a model used at Division I colleges, where robust corporate budgets cater to the demands of high-paid coaches, trainers and highly competitive co-eds. The more state-of-the- art the training facility, the better advantage an athlete has.

Mosher and Provost acknowledged that there is still much to be done for the Adirondack Coast Athletic Complex if it is to host tournaments for local and out-of-town teams. But local adult soccer leagues regularly use the complex’s arena already and PFC youth teams have begun booking the space for training slots a few times a month. Flag foot- ball and dodge ball leagues have also expressed interest. There’s a certain comfortable North Country charm that will keep the arena full, state-of-the-art or not.

In an effort to round out their services and offer all the amenities of a true sports complex, Mosher and Provost have included a boxing ring: a black mat surrounded on four sides by ropes gives a training ring to the fierce men and women who make boxing part of their fitness routine. For those less familiar with the sport and who want to learn more, Mosher hired two-time Golden Glove champ Precious Harris-McCray to teach classes three times a week.

“I’ll be honest,” said Provost, “I was like, ‘a female boxing instructor, really?’ But I was wrong. She’s good. The guys love her. And she opened the door to females coming in, because females wouldn’t have come in with a male instructor.”

Mosher said hiring Harris-McCray is “one of the best things I’ve ever done.”

“We have female boxers in here now; all different shapes and sizes, too. And they’re comfortable because she’s a female. I’ve never seen anything like it,” she added.

Familiarity and a family feel are important to gym goers and it’s one of the reasons Harris- McCray enjoys working at Powerhouse Gym and coaching athletes of all skill levels.

Still a work in progress, Mosher and Provost’s dream could be compared to the bodies of members who work out there. Progress comes slowly and sometimes altogether unnoticeably, but the hard work inevitably pays off. Even without all the finishing touches in place, Adirondack Coast Athletic Complex offers a safe, healthy space for men and women of all shapes and sizes to explore pushing the limits of their body, improve their physique and maintain a healthier life- style overall.
Mosher and Provost are an incredibly fit pair who have made it their life’s work to blast beyond normal physical and mental limits. Toned bodies and sharp minds prove the benefits of a disciplined lifestyle and it stands to reason that they’ll push through to heavy- duty success in most any endeavor they set their minds to. Their varying backgrounds and skills offer expertise in everything from nutritional guidance and confidence building to supplement research and muscle building. Mosher calls it a perfect fit.