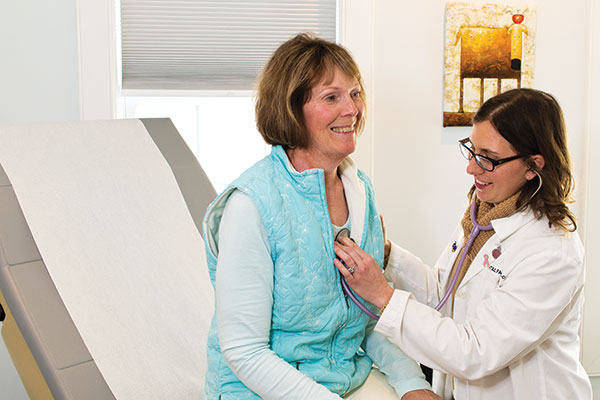 Strong, attentive and consistent pri- mary care is one of the first lines of defense against illness and disease for every North Country citizen, as well as the first resource for treatment when defenses are broken. Primary care focuses not only on the diagnosis and treatment of diseases, but also on disease prevention, patient education and health promotion and maintenance. Healthcare is a collaborative system, and primary care is at the core of that system.

Dr. Jonathan Beach of Beach Medical Services made the decision to become a doctor at the age of four. Despite his quick decision, Beach first needed to learn his trade. He studied at the New York College of Osteopathic Medicine, then completed an internship/residency in Emergency Medicine at SUNY Upstate Medical Center in Syracuse. Beach also has a Medical Review Officer Certification and is a Diplomate of the American Board of Obesity Medicine. With his schooling completed and his childhood dream realized, he began practicing medicine in 2004.

Three years later, he took over Urgicare of the Northeast in Plattsburgh and began the process of expansion. Currently the practice offers primary care, diabetes care, industrial medicine, walk-in medical care, cardiology, skin care, obesity medicine, and psychology, as well as a host of educational seminars.

Beach Medical Services not only offers a wider range of services than its predecessor, but is also larger in terms of both space and staff. The office is now nearly 8,000 square feet and the number of employees has jumped from three to 18.

When asked what sets his practice apart Beach replied, “We change with the community. This flexibility is invaluable. From day to day, the healthcare needs of a community are never quite the same, and primary care providers must be quick to respond to changes.

“Diabetes and obesity continue to rise and present huge needs to the healthcare community,” he continued. In 2014, the New York State Department of Health reported that over 60 percent of adults in Clinton County were overweight or obese, and more than eight percent lived with physician-diagnosed diabetes.

While diabetes and obesity are nationwide healthcare concerns, their impacts hit close to home. As a primary care provider who has first-hand knowledge of diabetes, Beach is an asset to the health of the North Country. He explained that diabetes and obesity are preventable. Primary care stresses health maintenance and patient education. With proper education, patients can become advocates for the improvement of their own health. By hosting educational seminars, Beach Medical Services plays its part in helping to prevent disease in the North Country.

Unlike Jonathan Beach, Dr. Kristin Ambler did not know until much later that he wanted to practice medicine. “I decided at the last minute I wanted to go to medical school,” Ambler said. Ultimately, he decided medicine was a good fit because he was good at science, liked working with people and enjoyed a challenge. “As luck would have it,” he said, “my junior and senior years at SUNY Binghamton I was doing bio-chemistry research with a professor who became the Interim Pre-Med Advisor when application time rolled around.”
With his professor’s help, Ambler put together his Pre-Med folder “in record time,” and applied to medical schools. He eventually graduated from New York Medical College, then completed his residency at Winthrop University Hospital on Long Island. Ambler worked his first year as an Emergency Room physician before moving to Plattsburgh in 1989. He has been practicing for 27 years, about which he said, “In some ways it seems like a long time and in other ways, not so much.”

Ambler’s good fortune extended beyond a single college professor. A series of serendipitous events led him to Plattsburgh. When asked why he chose to base his practice in the North Country he responded, “It was a chair lift ride! I was at Sugarbush and was talking to a gentleman on the lift. He went on about Plattsburgh, its demographics and that there was a physician shortage. Later that week I drove to Grand Isle, hopped on the ferry and came to Plattsburgh. I was driving around Cumberland Head exploring when I stopped to ask someone how to get to the hospital. It turned out the person I spoke to was an orthopedic surgeon who gave me the name of the physician recruiter at CVPH. I drove to the hospital and met with the recruiter. As luck would have it, Alan Walker who was Chief of Medicine at the time was on his way to a medical staff meeting and invited me to tag along. He introduced me to everyone and the rest is history.”

While Ambler’s practice has evolved, he does not believe the healthcare needs of North Country citizens have changed significantly. Rather, he believes the ways in which physicians deliver care to patients has changed. “Physicians in the region are encouraged to work collaboratively with patients through initiatives such as Northern Adirondack Medical Home and the Adirondack Accountable Care Organization. These patient-centered approaches combine teamwork and information technology to improve care and patient experiences and ideally reduce costs.”

The most profound change, Ambler believes, has been the use of technology. His practice has implemented electronic health records, allowing for quick and efficient access to patient information. While the Ambler Medical website is still under construction, the patient portal is up and running and allows patients to view their chart, check upcoming appointments and request prescription refills, all from the comfort of their homes. With laptops, smartphones and tablets becoming more prevalent, Ambler Medical has taken a step in the right direction by embracing online communication.

While the office has grown, health records have been digitized and online communication has been embraced, Ambler’s practice has remained the same. “We nurture our patients and stress the importance of disease prevention through healthy lifestyle choices.” Ambler emphasizes education and prevention—the core values of primary care.

While Drs. Beach and Ambler got started in medicine in different ways and took different routes to establish themselves in the North Country, the two men seem to agree on the importance of primary care.

Dr. Ambler: “Your primary care provider is your advocate, your educator and should know you and your health concerns better than anyone. Primary care is the catalyst for specialist care and the connector of good health.”

Dr. Beach: “Primary care is essential as it is the front line of defense for patients and serves to organize and manage their healthcare needs. Only with adequate primary care can all needs and services be delivered and managed for each patient.”

In a constantly changing healthcare landscape, it is important for a community to have local primary care providers who can evolve with the times and adapt to the needs of the patients they serve. Look no further than Ambler Medical and Beach Medical Services for adaptable, community-based primary care.