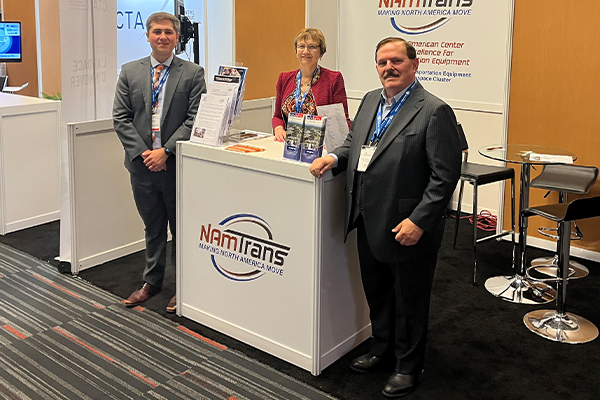 In November 2021 Congress passed the bipartisan Infrastructure Investment and Jobs Act and President Joe Biden signed it into law. The legislation includes more than a trillion dollars of new investment to repair and upgrade aging infrastructure, modernize bus and rail fleets and replace thousands of transit vehicles, including buses, with clean, zero emission vehicles.

The announcement of the largest Federal investment in public transit history was warmly welcomed across the country and especially here in the North Country. The manufacturers that make up our ever- growing Transportation Cluster stand to benefit greatly from this funding.

But wait, that was a year ago. Where are the new contracts? Where are the new jobs? To find the answer to my questions, I turned to Joel Wood, Director of the North American Center of Excellence for Transportation Equipment (NAmTrans), a division of the North Country Chamber of Commerce who quickly disabused me of the idea that things are moving slowly. “Investment in transportation systems is funded, primarily, by the Federal government,” he explained. “Appropriating the money is just the first step. Next the Federal Transit Administration (FTA) puts out a notice that funding is available and invites applications from the transit agencies and municipalities.”

Of particular importance to our area is the inclusion of approximately $1.2 billion for the Low or No Emissions Vehicle Grant Program that will fund 1,800 new and 1,000 electric buses. Hundreds of transit authorities from across the country have applied and were awarded this funding in August of this year.

It takes some time for the money to be appropriated, for the grants to be awarded, for the orders to be placed, and for the work to begin, but Wood was pleased to tell SB readers that orders have been placed, even bigger announcements are on the horizon, and the best is yet to come. “We have already seen smaller orders for electric buses begin to come in from the Metropolitan Transportation Authority, San Francisco Municipal Transportation Agency, Milwaukee County Transit System, and beyond. Many of these communities order a handful of buses to pilot them in their communities first prior to placing larger orders.”

Wood pointed to some of the complexities that await cities ready to convert to new, green technologies. “Purchasing an electric bus is the easiest part. Most transit authorities have found that there are many details to consider. Will the buses be suitable for their routes, for their weather? What kind of training will their drivers need? What skills will their technology and maintenance employees require? What charging infrastructure will be needed to keep the vehicles moving?”

A full transition from a diesel to electric fleet can takes years. A pragmatic approach used by most cities is to start with a few new buses and learn as they go.

When asked about the value and duration of transportation contracts, Wood explained. “It depends on the size of the contract (number of vehicles) and type/complexity of the vehicles. Take for example a contract currently under construction by Alstom for the New Jersey Transit Authority that is likely to provide work for our region for five to seven years. And if the Authority exercises all its options, it will take the completion date out even further.

As this funding and large orders continue to rollout, manufacturers continue to face lingering challenges posed by the pandemic and global supply chain issues including a lack of materials as well as slow and costly delivery. “There was a time when manufacturers looked primarily for the lowest cost suppliers,” Wood observed. “Now proximity that provides timely delivery of parts is their driving force. Localizing and diversifying supply chains has become the focus.”

To support our transportation cluster, the North Country Chamber of Commerce established NAmTrans in 2015. Its mission is to serve the fifty plus transportation equipment and aerospace manufacturers in the seven county North Country Region of New York State. “It is critically important for us to listen to companies and learn what we can do to help,” Wood says.

So, in March of this year NAmTrans took on a daunting task when it hosted its second Quebec-New York Transportation Rendezvous & B2B event in Plattsburgh to bring together Canadian manufacturers and New York State suppliers who had never worked together. It was a time when COVID was still an overshadowing concern. To make the event happen it was necessary to set up onsite COVID testing and facilitate border crossings. Despite those hurdles that needed to be addressed, the event was a huge success, attracting 150 attendees who engaged in over 100 business meetings with one another. “We even attracted an electric school bus manufacturer from the Midwest that has since begun working with a handful of local suppliers – providing them with more work and in turn, more jobs in our region.”

In September, NAmTrans also co-hosted a Supply Chain Conference in Corning, New York that brought together large players like Alstom, Nova Bus, Vapor Stone Rail Systems, Oriskany Manufacturing, CAF USA, and Norsk Titanium with suppliers from across the state. “We chose Corning because it was a central location for companies from western, central and southern New York,” Wood said. “Our choice was confirmed when we had over 40 suppliers from Buffalo, Syracuse, Rochester, and Endicott who attended and met with our North Country manufacturers – forming new relationships and business connections.”

With unemployment below three percent in our area, workforce issues are also top of mind for most companies. To be proactive in addressing demands of the workplace, the North Country Chamber of Commerce and NamTrans secured a $285,000 grant from the Northern Border Regional Commission to offer a Welding Training Program in April 2023 in conjunction with Clinton Community College and Lincoln Electric, a leader in the welding industry. The program and all the needed personal protective equipment — such as shields and gloves — will be provided to 50 participants free of charge.

North Country Manufacturing Day, supported and co-organized by the Chamber and NAmTrans was held at the Institute for Advanced Manufacturing at Clinton Community College in November attracting more than 500 students and 14 manufacturers. The program offered an introduction to various aspects of manufacturing. “Our hope was to change perceptions of work in the industry and open their eyes to potential careers.” Wood said. “To achieve that we had displays geared to a young audience — a virtual flight simulator, a virtual welding experience, a session about how to use robotics. There were even manufacturing-themed escape rooms.”

If you would like to learn more about what NAmTrans is doing for our manufacturers in the North Country, go online and visit www.namtrans.org or watch its video series – “On-the-Job with Joel” which will take you on a journey inside the operation of a number of local manufacturers to learn how a bus and train are built right here in our backyard.

“It is important to note that none of what we do would be possible without the support and vision of our NAmTrans Advisory Board, and most importantly, Assemblyman Billy Jones who provides the financial assistance possible for us to provide these crucial support services to our cluster companies,” concluded Joel.

Despite our challenges, the future looks bright for the North Country’s Transportation Equipment and Aerospace Cluster which stands to benefit greatly from the five-year infrastructure bill and the support it receives from NAmTrans and the North Country Chamber of Commerce.