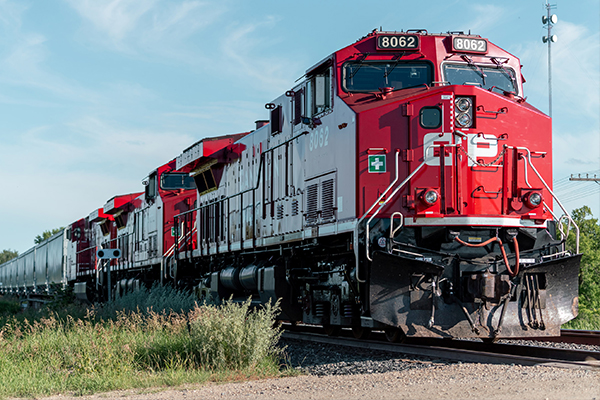 Rail transport is a key part in expanding economic growth in our community. According to Joel Wood, Vice President of Strategic Initiatives at the North Country Chamber of Commerce, companies ask if there is an active rail line in the region when they are considering moving to Plattsburgh. Indeed, there is the Canadian Pacific Railway (CP) which goes right through Plattsburgh on its way to Montreal. It starts in Western Ontario and comes through Montreal before it crosses at the Champlain border. It is the seventh busiest crossing for rail freight along the Canadian border.

A number of area companies are taking advantage of Plattsburgh’s proximity to the CP line. Some, like Mold-Rite Plastics, are fortunate enough to be located near the railway or have their own rail spurs, while others, like Schluter Systems, utilize companies like The Northeast Group and South Junction Enterprises that have rail spurs along CP lines.

In 2018 Schluter Systems began a search for a more cost-effective way to transport its raw materials. While a truck can hold 15 pallets, a railcar can transport 68 pallets. A turn to rail was an easy decision.

Mold-Rite Plastics has been using rail transport for at least 20 years and is able to unload from railcars at its facility located near the former Plattsburgh Air Force Base. Two of the company’s most common resins, used to make their plastics, are transported by rail because of the convenience and the cost per pound. According to Eric Zeisloft, Vice President of Operations, Mold-Rite has been able to quadruple its capacity by using rail. “A railcar can hold 200,000 pounds of resin while a truck can only hold 45,000 pounds. It would require four times the amount of labor to unload a truck versus a rail car.”

Rail transport also increases capacity since a railcar does not have to empty and leave. Instead, it is able to be jockeyed around the site until needed or even shipped to another facility. According to Jennifer Shantie, Purchasing Manager at Mold-Rite, they are shipping approximately 20 railcars a month up from 17 cars last year. By the end of 2022 they are expecting to increase to 25-28 railcars a month.

Country Malt in Champlain has been using a third-party provider to transport malted barley to various customers locally and in the northeast since the business started 25 years ago. The service provider uses Canadian Pacific and has rail yard in Vermont. Since the rise of the microbrewing industry in the 1990s, Country Malt has supplied malted barley to breweries across the Northeast, New York and Pennsylvania, but did not start transloading until 2004. After more than 15 years of moving product by rail, the company is close to transloading 5,000 tons a month.

While companies cite the advantages of rail transport as its cheaper costs and the ability to move larger quantities. Joel Wood pointed out that rail transport is more environmentally friendly. It takes less energy to propel railcars than other modes of transportation. Rail transport also provides an alternative as companies navigate the supply chain crisis. While other companies are dealing with a CDL driver shortage, local service providers are not having much difficulty hiring drivers. That is because the loads are staying locally. There are also fewer hands involved in the process because drivers are picking up the products directly from the railcars instead of from distribution sites or warehouses.

Many of the area companies that use rail transport were concerned last year when Canadian Pacific reduced its delivery to the area from five to three days a week and then, a month later, reduced it to two days a week. Many of them teamed up with the North Country Chamber of Commerce to call on CP to restore services to five days a week. Despite Plattsburgh’s small size, through their efforts the group was able to convince CP to return services to five days a week. With such a strong coalition of businesses and community leaders, the future of rail transport in the North Country looks bright.