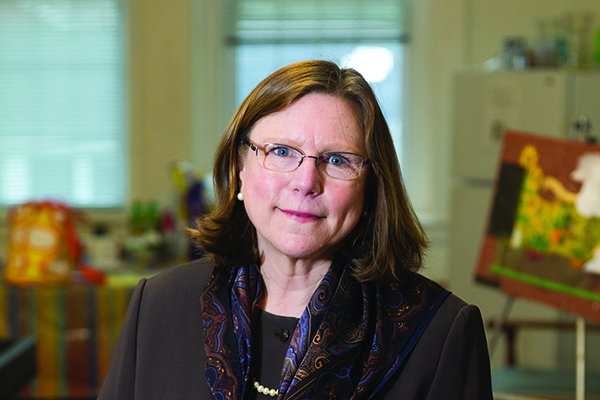 There is a remarkable project going on at the Plattsburgh Public Library that is generating enthusiasm among participants from all ages and different walks of life. Involving hundreds of members of the community, the Read and Grow Dream Garden Mural is a conglomeration where art meets technology.

The project began about a year ago, when Anne de la Chapelle, library director for the past four years, invited Amy Guglielmo and Julia Devine from the not-for-profit Outside Art to come up with an idea for the outside wall of the library facing Brinkerhoff Street. De la Chapelle had the wall to offer, Guglielmo and Devine had a great idea, and together with artist Sue Burdick-Young, they have embarked on an amazing project.

All three women have had prior outside projects under their belts. Burdick-Young orchestrated the Mountain Lake Mandala on City Hall Place and collaborated on the Clinton County History through the Eyes of its Children mosaic on the Clinton County Government Center. The Battle of Plattsburgh depiction on the side of The Champlain Wine Company on City Hall Place and the Woods and Wild Things mural on Court Street are prior projects of Outside Art. De la Chapelle said these three artists were the driving force behind this project. Take three imaginative talented women, throw in some technology, blend well with community members, and you have an awesome product.

Special efforts and attention to detail by Guglielmo, Devine, and Burdick-Young brought the book to life with hundreds of mosaic tiles in the outdoor mural. As de la Chapelle and Burdick-Young took me on a tour of the work in progress, it was obvious that there are hours and hours already invested in the project—and many more to go. There are ceramic tiles made to look like beautiful sunflowers, carrots, beets, snakes, pumpkins, beetles, and worms plus boxes full of tiles that will become the dirt in the mural. I also saw a beautifully crafted chicken, cardinal, and blue jay.

De la Chapelle explained that this is a full STEAM project. STEAM is the acronym for science, technology, engineering, art, and math. The project really is a partnership among all five of these entities. Four different robotics groups are involved, Professor Dr. Michael Walters from SUNY Plattsburgh and his physics students have helped, Adirondack P-TECH assisted, and working and retired teachers and artists have added their special talents. Children of all ages worked on hundreds of ceramic tiles over the summer. How inspiring that education about the environment can be brought to life using art and technology!

Burdick-Young showed me some of the tiles that were made to look like dirt, and how she went about teaching the kids how to create them. That day, Kit Booth, a seasoned wood carver, was working at a table along with retired art teacher Jerry Sequin. Local jeweler Sally Booth and art teacher Lisa Crain rounded out the table. These hardworking volunteers told me they sometimes work three days a week for six to seven hours a day.

When the project is done, de la Chapelle said they will have between $15,000 and $20,000 invested in it. They received a $5,000 decentralization grant from the NYS Council on the Arts, $750 from Stewart’s Holiday Match program, $500 from Friends of the Library, and $5,000 from the Clinton County tobacco settlement money as this project qualifies as an educational endeavor. The rest of the funding came from private donations by local businesses and individuals.

When I asked Burdick-Young what the hardest part of this project was for her, she said it was trying to get her artistic brain to understand the jargon of the technology people. “I had to learn a whole different language.” Burdick-Young is used to thinking in terms of slabs of clay, (she used clay from Lake Champlain), bas relief technique, kilns, and colors. But she had to understand batteries, motors, 3D solar panels, servo panels, and how all those pieces were going to function in order to get the marbles to go through a plastic tube and act like rain drops. When I asked her what the best part of this project has been for her, she said, “I have to say the comradery and working with these wonderful people, new people; it’s just great.” De la Chapelle agreed, adding, “Having this kind, loving energy here in the library is wonderful.” Both agreed that having a communitydriven, hands-on learning project is the best kind of project. As the two women talked about the joint venture, the positive energy and enthusiasm came through and it was obvious how much they have enjoyed working on it.

De la Chapelle is already looking down the road to her next project for the library. She wants to eventually turn the room where all the work is currently being done into a creative “maker space” where all kinds of projects can take place. She has the space in the old building that was originally Plattsburgh High School. In order to transform the room into what she has in mind she will need to raise about $50,000. She has $6,000 of that now and she’s already started collecting things like a donated sewing machine and a 3D printer that will be put to good use. She’s an ambitious director with lots of ideas for future projects.

The Read and Grow Dream Garden Mural will be the third tile mural in downtown Plattsburgh and is expected to be done before the end of the year. De la Chapelle had some ideas for the unveiling party.
“I see some cider and donuts on Brinkerhoff Street in conjunction with the Y.” Burdick-Young has ideas for a coloring book for the kids. De la Chapelle said there may be a few speeches and, of course, the unveiling itself, where everyone can see what this unique partnership has been all about. I will definitely be there. Bring a chair, sit for a while, and sip on some cider while celebrating this most spectacular accomplishment!