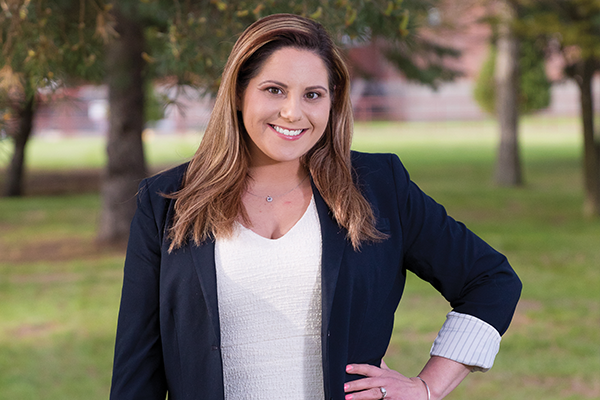 Renee McFarlin is a Jersey girl who married a man from the North Country. On one of her first trips to the area they stopped at the High Peaks rest area and, as Renee tells it, “That was it. I begged him NOT to take me back to New Jersey.” It took a little time to work out the details – she had law school to finish – but in 2014 the couple relocated to the Adirondacks. In search of a job, Renee applied for a position at the Adirondack Medical Center in Saranac Lake. It turned out she wasn’t a fit for that job but the person who interviewed her asked if she could forward her resume to the area’s newly elected member of Congress who was hiring staff. The match was made and Renee spent the next three years as Elise Stefanik’s regional director.

Now in her role as the Executive Director of the Clinton County IDA and the county’s Economic Development Director, Renee is involved in the redevelopment of the Durkee Street area in downtown Plattsburgh as well as projects like the expansion of the Vilas Home and a new hotel on Route 3 in Plattsburgh and her agency has recently closed on a major solar project. “We are planting big and little seeds in a strategic way to prepare for the next opportunities that come our way,” she explained. “I have learned that engaging with local stakeholders and community members is integral to growing our community.”

I won’t claim to be the expert on “success,” but I know that I will never completely own any success I might find. Everything I have accomplished thus far is due to those who came before me, and anything I might accomplish in the future will only be achievable because of their work.

Over the last four years, I have had many opportunities to become involved in projects around the North Country, some have been resolved successfully, and some are still moving positively. For example, during my time with Congresswoman Stefanik, I worked with the County to resolve an outstanding issue with the FAA over the former Clinton County Airport. While I was successful in accomplishing my task at that time, I was just one piece of the equation that helped move the project forward. In my current role, I recently submitted a grant to fund infrastructure development at that site.

By engaging with the community over the last year, I observed a few priority concerns, including but not limited to child care, housing accessibility, and buildings that have gone unused and may be in disrepair. I am working with the IDA Board and County to develop strategies that will hopefully generate investment in those sectors, as well as incentivizing adaptive reuse of those structures.

How do you maintain a work/life balance?

I wouldn’t call it a balance, but a juggling act. Sometimes you have to throw some of the balls up higher than the others, and just hope you catch them before they land on the ground. That, and an amazing house cleaner.

Learn something from every single interaction you have with another individual. My strategy is to synthesize every exchange into a valuable experience.

What is the most exciting trend happening in the community right now?

Governor Cuomo is emphasizing workforce development this year, which is inextricable from economic development. Child care and workforce housing will be integral to this conversation, and efforts are underway to tackle both of these issues. I am working on the Jay Task Force with local stakeholders and the Regional Office of Sustainable Tourism to conduct an employer-based housing survey to (finally) ascertain the market demand for local housing, and how that impacts our region’s growth and local employers’ ability to recruit and retain employees.

I do not believe this generation necessarily strives for homeownership, but prefers to “live/work/play” in the same place. Housing located near jobs will be key to attracting this generation.

Every decision you make, whether it seems right or wrong at the time, will still land you exactly where you’re supposed to be. You are also totally right about life being way cooler as an adult.