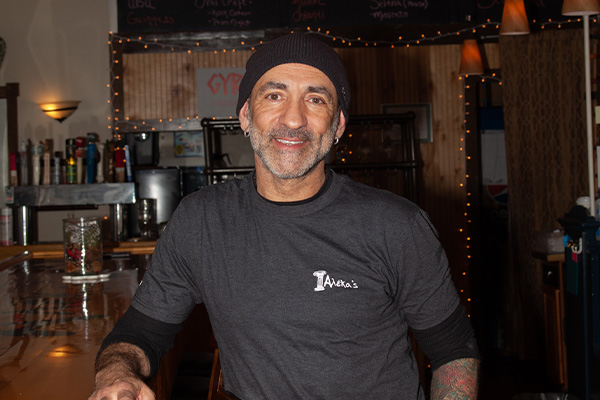 Peter Kritziotis has been in the restaurant business for decades. Since both his parents are from the Mediterranean area, it is no wonder he celebrates their food and culture, but with a fresh spin. “My mother is Sicilian and my father is Greek,” he explained. “Their influence is in my kitchen — 100%”

Kritziotis has operated restaurants in Plattsburgh for years. First in the south end of the city (My Greek Kitchen), then in the west end (My Greek Kitchen II) and now he has settled in the downtown area on Margaret Street. This restaurant, known as Aleka’s, feels just right. “I’ve lived in big cities — both south of here and north of the border and they are so condensed,” Kritziotis said. “They lack the ability to build and grow a business — especially in hospitality or a restaurant like this one (independent owner/operator).”

When Kritziotis ended up in Plattsburgh he found he loved it here. “This offers the best of both worlds – a small town and a city.”

In my interview with Kritziotis he was happy to share news of Aleka’s renovation with Strictly Business. Some planned and some essential changes occurred in late 2020. While the Margaret Street location retains all the charm of an older building, it had developed serious structural problems.

The floor in the kitchen had dropped. The sub floor was crushed and disintegrating, posing a real hazard. In addition to the much-needed work in the kitchen, Kritziotis developed plans for upgrades and modernization throughout the restaurant. “We were getting some much-needed work done when a visit from the building inspector brought a whole new sense of urgency,” he explained. “Our outer wall was compromised. I actually laughed when they told me. Another obstacle in 2020! Hey, why not?!”

The crumbling wall could not be ignored. It wasn’t safe and so in late October 2020 the restaurant shut down. “I was never going to give up – never,” Kritziotis said. “I want to be here for generations!”

A conversation with his next-door neighbors happened one day as he was taking out the trash. “I share a parking lot with Olive Ridley’s,” said Kritziotis. “Knowing most restaurateurs will lend a hand to one another, I spoke with James “Jungle” Guyette Jr., Olive Ridley’s general manager. I asked “Do you have room for a Greek restaurant in there?’ Jungle replied, ‘We just might.’”

On Monday October 26th, 2020 Aleka’s teamed up with the staff at Olive Ridleys for what Kritziotis called a “Kitchen Takeover.” That meant customers could go to Olive Ridleys and enjoy the luxury of two menus.

The best part about the arrangement was that Kritziotis did not need to lay off staff. “All of my people continued to work and the arrangement did not affect Olive Ridley’s staff. It was beautiful. I can’t thank Jungle and owner Matt Spiegel enough for what they did.”

Once the employee team was taken care of, Kritziotis was ready to navigate the physical renovation. The professionals from Ryan’s Masonry addressed the structural concerns while he used the time to make changes to enhance patron’s dining experience.

The bar was moved to the center of the space so guests could be seated on either side. The area around the new elongated, high-top bar is now available for single diners or larger groups. On one side of the room there are tables for two; the other side is primarily booth seating for parties of four. The kitchen is state of the art with a pizza oven, a sauté line and a reinforced floor to support the legacy that Kritziotis is building and serving up.

Climate issues in the restaurant were also addressed with monitors in both the dining room and the kitchen. “During the hot summer months there was no escape from the heat — for diners or for cooks,” Kritziotis explained. “Temperatures would get unhealthy back there on the line. It was something we had to do.”

In 2021 Aleka’s reopened with a new look and a new commitment to its longtime customers. It would be easy to understand if Kritziotis had been discouraged, or even defeated by Aleka’s problems, but he embraced each challenge as an opportunity. Serendipity, as opposed to luck, requires the right mix of perseverance, preparation and opportunity. Perhaps serendipity is luck that you work really hard for — no matter what. That’s what Peter Kritziotis did.

WHAT HAPPENED TO THE WALL?

Aleka’s compromised wall ran alongside what is now a parking lot, but was originally part of the famed Cumberland Hotel. The Cumberland, first opened as the Cumberland House in 1854, stood proudly at the corner of Court and Margaret Streets in downtown Plattsburgh for over 120 years. Sadly, it was the causality of a massive fire in July of 1978. It is believed that the fire “baked” the structural integrity right out of the brick. It was a feat of engineering that the wall lasted as long as it did.