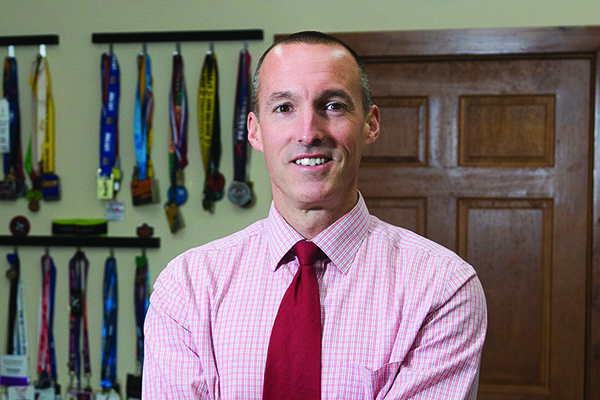 Dr. Jon Mulholland’s office looks out over Margaret Street in downtown Plattsburgh from an upper floor of the old Merkel’s department store. Tall, wide windows brighten the simply decorated room. The north wall is red brick, mirroring the brick buildings up and down the street. Mulholland is a chiropractor who specializes in treating athletes. The name of his business is Ideal Athlete Chiropractic; however, he also cares for anyone with joint or muscle problems. Displayed on the back wall are numerous awards and ribbons from his time as a competitive athlete, as well as many event passes from his work as a trainer for Olympic and professional athletes. He deeply believes in exercising, or simply moving, each and every day.

Chiropractic is a form of alternative medicine. It emerged in the 1890’s when a Canadian born Iowan named D. D. Palmer claimed to receive information from “the other world”, mysteriously from a doctor who had died in the 1840’s. Palmer believed that misalignments in the vertebrae of the spine, which he termed subluxations, led to the inability of the human body to heal itself. While some current day chiropractors adhere to this disproven belief, many like Mulholland reject the metaphysical notions of early chiropractic and base their treatments of joint and muscle problems on proven science. Mulholland explained, “I have an evidence-based practice, meaning there are studies and research we use in the approaches to our patients.”

Mulholland has deep roots in the North Country. His father is from Mineville, while his mother is from Ellenburg. Both were teachers, and Mulholland graduated from Plattsburgh High School where he was a standout on the track and field team and is a member of the high school’s Athletic Hall of Fame. He went on to Ithaca College where he majored in sports and exercise science. He competed on Ithaca’s track team, graduated magna cum laude, and then went on to attend Minneapolis’s Northwestern Health Sciences University, a small private school that has programs in chiropractic, Oriental medicine, acupuncture, and therapeutic massage. After earning his DC degree, he set up shop in Elizabethtown but found that he was not happy with the demands of a clinical practice. When his alma mater offered him a position as chief of staff, he and his family relocated to Minnesota but returned to the North Country after only a couple of years
to tend to family matters.

Mulholland enjoys competing in various athletic events, including the Lake Placid Ironman Triathlon, which he’s done three times. The Ironman consists of a 2.4-mile swim, a 112-mile bicycle ride and to top it all off, a run on foot of 26.2 miles. He has also engaged in long distance mountain bike races, climbed Mount Rainier, competed in cross country ski races, and completed several obstacle course races. Judging by the ribbons and medals on his office wall, he must be pretty good.

In addition to seeing patients locally, Mulholland has extensive experience assisting professional athletes, He was at the London Olympics in 2012 as a member of New Zealand’s medical staff, and was the team chiropractor for the USA Track and Field team, the USA bobsled and skeleton teams, and formerly served as a chiropractic consultant for the Olympic Training Center in Lake Placid. He has also worked with Swiss, Italian and Canadian athletes.

Mulholland also maintains an active schedule as a public speaker. He has traveled extensively to address chiropractic conferences in the United Kingdom, Mexico, Australia, New Zealand, and Ireland. His topics include runners’ injuries, performance enhancement, the concerns and challenges facing para-athletes, joint pain in cyclists and kinesiology taping. (Kinesiology tape is a proprietary brand of athletic tape used to support muscles and joints to aid in injury prevention and recovery. The tape is made of cotton, with a medical grade acrylic adhesive.)

Mulholland does not believe chiropractic treatments should be open-ended. If a patient’s problem cannot be resolved in four to six visits, he refers them to another practitioner like an orthopedist or back to their primary care physician. He has great respects for his patients and schedules their visits so they don’t spend much time in his waiting room. As a sole practitioner, Mulholland is able to give every patient individual attention. His patients like the idea that they are going to see him, and only him. He does have a receptionist, a cheerful woman named Tami.

Mulholland firmly believes that each patient needs to actively participate in their course of treatment, and he often gives them exercises to do at home between office visits. He advises on warm-ups, injury prevention, post-event recovery, nutrition, and weight work. Curing joint and muscle problems of necessity requires a lot of physical hands-on activity, an aspect of his practice that he particularly enjoys.

Chiropractic is a word based on ancient Greek meaning “practical hand.” When asked to explain what he does in layman’s terms, Mulholland said, “Through trauma, like a car accident, or overuse, joints can become stiff and muscles can become tight. My job is to loosen muscles and unstick joints, to return a normal range of motion.”