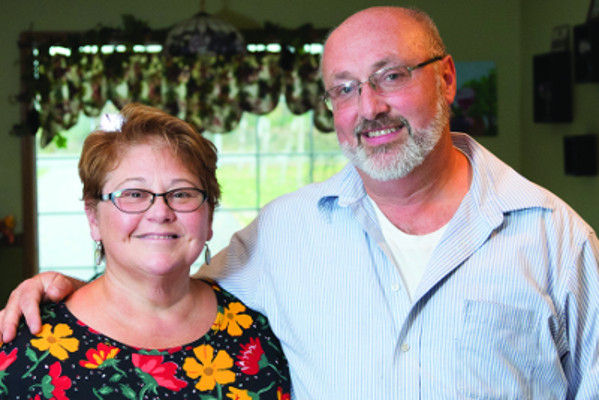 Settling into a finely set corner table next to the roaring fireplace, one can’t help but imagine the room filled with laughter, love, great food, and great wine. Wife and husband team Mary and Gilles Fortin envision the same. This is their passion, their life, and their partnership. On this small slice of Chazy, NY, the love they have for being of service and for each other flows just as freely as the wine at Amazing Grace Vineyard & Winery.

Partners from the beginning

Married at 19, Mary and Gilles Fortin found themselves building a partnership that would last a lifetime. Comparing notes, literally, the two music majors rehearsed musical compositions, practiced their craft, and found time together in music rooms on more than one occasion.

From the beginning it was clear to the Fortins that Gilles focused on details and Mary was the big-picture thinker. “This was a good match for both of us,” Mary explained. “I think and dream about the big picture and I hate the details. I don’t want to think about them. I can make an amazing meal and just throw it on the plate.” And Gilles interjected, “She can make the best soup, but I’ll be the one to make sure the swirl is added and that the plate is just so.”

As their post-college careers progressed, the Fortins found that their partnership expanded in the most natural way. Both music educators, their classrooms were located across the hall from each other’s. When Gilles had trouble connecting with students, he would send them to Mary. When Mary had similar trouble, she’d send students to Gilles. It was a partnership that not only supported their lifelong commitment to service, but also added a familial quality to their teaching dynamic that was conveyed to their students. “To some of these kids, we represented their mother and father,” Mary said. “Our ability to work together supported those students and it also supported us.” Eventually, Gilles moved from teaching to administration, becoming—as he put it—Mary’s principal “in name only.” She agreed.

When the couple retired, they spent a lot of time looking at vineyards and thinking about how nice it would be to sit around chatting and drinking wine with people and having a good time. “Little did we know…,” Mary said with a laugh. “It’s a lot more romantic to think about because you don’t see the back-breaking work.”

Amazing Grace was the result of what Mary admitted was a distaste for, and inability to make, jelly. After purchasing their property in the early 1990s, they found a variety of Concord grapevines that produced grapes, but the fruit generally went to the birds. After contemplating what to do with the fruit, Mary admitted, “I don’t like jelly, and we don’t eat a lot of it. And I just couldn’t ever get jam to set. But I do like wine!” So she went to work and started making wine from the grapes, using kits as a way to get things going.

Slow and steady has been their approach to growing this wife and-husband-owned business. “We decided to do everything on our own. When most people we know used bank loans, we wanted to take our time and not worry when things were slow,” Mary explained. “We’d make a little money, then we’d spend a little money. We’ve been really careful not to use our retirement savings to fund this business, and we’ve been pretty successful at it.”

When they first started the business, it wasn’t all fun. They loaded their back room—a 12 x 14 foot sunroom—full of 60 six-gallon carboys (large rigid bottles used for fermentation). “I remember loading all those carboys,” Gilles said. “I ended up building platforms to store them.” They were so inundated with bottles that they tried to disguise them by making snowman costumes for them.

“After a while we were embarrassed by the smell in the house from the fermenting grapes,” Gilles admitted. “But once the smell went from fermenting grapes to wine, it didn’t smell that bad,” said Mary with a smile. Hauling bottles up and down from the basement also became unbearable.

After a couple of cramped bachelorette parties in their small tasting room, the Fortins quickly realized that it was time to expand their operations. They quickly converted their two-car garage into a new tasting room. Soon after, they added a commercial kitchen and started to cater events and host more parties. Now they’re planning an expanded deck and three-season gazebo to extend their season and offer more to their customers.

Food also seemed to be a natural progression for the winery. “Cooking is a de-stresser for me,” Mary explained. Gilles pointed out, “It also evolved out of a concern for people who were coming and drinking, and being unable to give them food other than pretzels.” Amazing Grace is the northernmost winery on the Adirondack Coast Wine Trail, and by the time patrons got to the vineyard, it was clear they needed something. “Besides creating a nice atmosphere, it keeps the patrons here and engaged,” Mary said.

The couple’s original plan was for Mary to be the winemaker and for Gilles to manage the vineyard. However, as time went on, the lines between business tasks blurred.

Mary explained, “Over time, if I needed to go out to the vineyard to do some work, I’d ask him, ‘Well, what about this?’” The same thing happened with the wine making. “I know when we need to do something to it,” Gilles interjected with a laugh.

For the most part, they’ve each found their niche in the wine-making business, but over time they’ve also played to both of their individual strengths (and weaknesses) to better understand who needs to do what. For all of the bookkeeping, Facebook and social media, and other customer-facing tasks, it’s a team effort to make sure all of the work is covered.

“Oh yeah, this is daily work for both of us,” said Mary. However, Gilles added, “She says ‘Oh yeah’ daily, but I say, ‘No, not really,’ because she does everything. She does it all. She manages Facebook, she keeps track of marketing. I’ll pick up little pieces here and here when I sense she’s getting frustrated.” From the beginning of this venture, it was clear to both of them that this is Mary’s business. She takes the lead on making the customer contacts and vendor connections, and ensuring the business is moving in the direction of their shared vision.

After spending time with the Fortins, the romantic notion of owning a winery as a retirement project is actually alive and present. The love they have for their business and for each other is overshadowed only by their love for being of service.

It’s not lost on the couple that a business needs to make money, but as Mary explained, “If we can make someone’s day just a little brighter, it makes all of the work worth it.” The Fortins have found a lifelong partnership of purpose, which is to be of service to others. It’s been like this since they were sharing a rehearsal room, to when they shared a hallway at school, and now, by sharing service through celebration and wine.